As anticipated, the aftermath of a cautious ECB monetary policy announcement and disappointing Chinese economic data resulted in the extension of market-wide risk aversion. The S&P 500 fell about 1.91% on Friday, closing at its lowest point since April. Declines in US equities were amplified as Johnson & Johnson, a prominent American Pharmaceutical company, suffered its largest plunge since 2002.

The US Dollar retreated after building up gains in the Asia and European trading session, but it still finished the day to the upside. 2019 Fed rate hike bets declined, suggesting ebbing yield advantage bets surpassing haven bids. It benefited from weaknesses in pro-risk currencies such as the Australian and New Zealand Dollars. Meanwhile the anti-risk Japanese Yen edged higher against its major counterparts.

Sentiment-linked crude oil prices fell during the US trading session, quickly retracing gains the commodity saw from Thursday on supply disruption concerns from Venezuela. This highlights the commodity’s weakness amidst preparations from OPEC+ nations to cut output next year. If stocks decline in the year ahead while supplies are cut, it could perhaps be up to the direction of the US Dollar to drive oil prices.

The Euro declined aggressively during the European trading session, falling amidst underwhelming composite PMI readings from France (which turned contractive from growth), Germany and the aggregate Eurozone. This highlights the European Central Bank’s cautious tone from last week’s interest rate announcement, making a rate hike beyond the summer of 2019 look increasingly unlikely.

With that in mind, the beginning of this week could be met with more risk aversion as Asia stocks echo the poor performance on Wall Street. Notable economic event risk is lacking, placing the focus on how market mood unfolds. AUD/USD, AUD/CAD and AUD/NZD look vulnerable to more declines this week. Meanwhile the Japanese Yen could be in store for more gains.

The S&P 500 has now closed below the recent lows achieved around 2,613. However, prices remain within the bottom range of horizontal support from May at 2,594. A descent through this area opens the door to testing 2018 lows achieved back in February. Do keep in mind though that there is the presence of positive RSI divergence, singling fading downside momentum. This could precede a turn higher in the near-term. 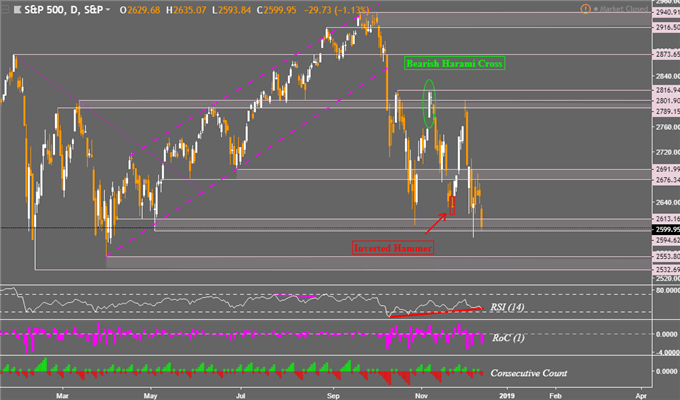