AUD Prices May Fall Into 2019, AUD/CAD at Risk to Reversal Pattern

The Australian Dollar continued its pursuit lower against its US counterpart this past week, failing to hold on to upside momentum towards the end of it as expected. This followed a break under a near-term rising support line. From this point until the end of the year, the outlook still remains bearish, but only slightly so. This is because AUD/USD struggled closing under the December/May 2016 lows on the chart below.

Bearish technical arguments in AUD/USD can be further solidified if we get below 0.71452. Then, all that will be standing in the path of the Australian Dollar and 2+ year lows is support at 0.70211. In the event of a push higher, near-term resistance is at 0.72466. Climbing beyond that exposes the descending trend line from July. There was previously a false breakout above it earlier this month. Confirmation of an upside reversal would require closing above the highs it left, around 0.73935. 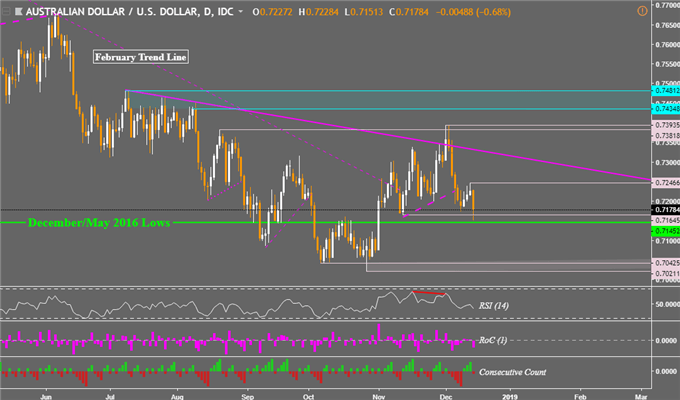 After climbing above the descending trend line from March and extending its bullish reversal, AUD/CAD could be on the verge of turning things around. Looking at the daily chart below, we have a Head and Shoulders bearish reversal formation. A descent through the neckline, which is around 0.95548, can open the door to testing the March trend line once again.

Then, it won’t be long until AUD/CAD reaches the 2016 lows around 0.93266. In the event of a turn higher, near-term resistance is the middle peak of the candlestick pattern at 0.96696. An ascent through it opens the door to testing the head at 0.9775. Given the risk of the formation though, the AUD/CAD technical forecast will have to be bearish through the end of the year. 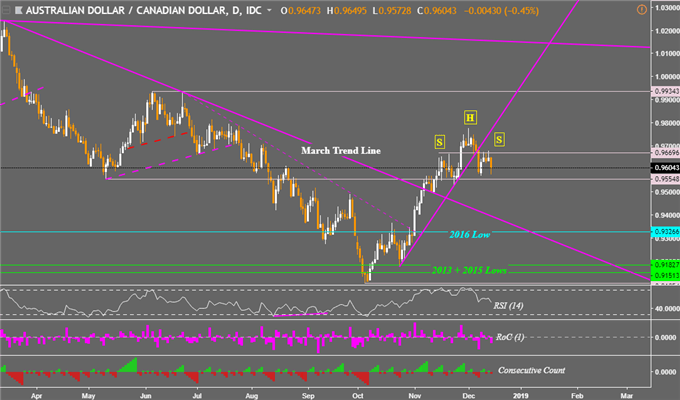 Meanwhile, AUD/NZD might be preparing to resume its dominant downtrend from October. Prices are still under the April 2015 trend line, which is a bearish signal. But more importantly the turn higher in AUD/NZD in recent days was unable to get past the trend line. Instead, a new falling resistance line from the middle of October has formed in its path. Should prices struggle pushing higher, we may turn lower towards 1.04347. A push above resistance on the other hand opens the door to testing 1.06699. With that in mind, the AUD/NZD technical forecast will have to be slightly bearish for the last few weeks of 2018. 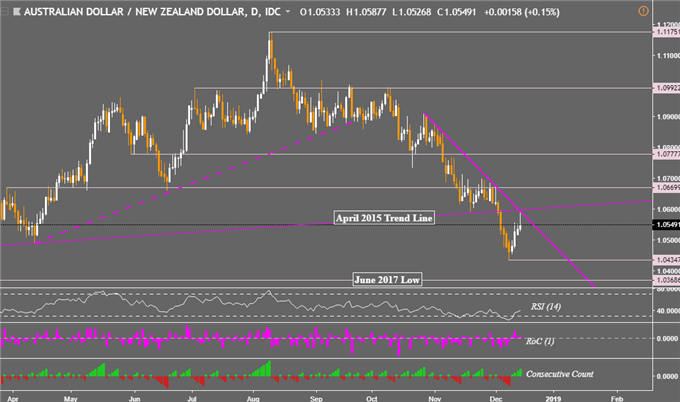