GBP at Risk Despite Theresa May Confidence Vote Win, Yen May Fall

UK Prime Minister Theresa May survived the vote of no confidence Wednesday, securing her leadership through the Brexit negotiations and reducing uncertainty. So why then did the British Pound simultaneously drop about 0.5%? Keep in mind, markets are forward looking. In fact heading into the vote, Sterling rallied up a storm as members of parliament casted their support for the Prime Minister.

Once her leadership was confirmed, markets are now facing reality. Theresa May is heading off to Brussels in an attempt to gather more concessions from the EU to build support for her unpopular Brexit draft. This seems unlikely as one of the main points of her draft is to restrict free movement of people, which entails leaving the single market. The odds are against her and GBP/USD headed lower.

Still, Sterling was the best performing major amidst a general improvement in risk appetite. Stocks rallied in Asia, Europe and on Wall Street. This followed improving US China trade talks where the latter nation agreed to cut auto import tariffs from the former. The Huawei situation also improved as the Nikkei 225 rose 2.15%, the DAX climbed 1.38% and the S&P 500 gained 0.54%.

However, the S&P 500 did trim most if its upside progress on more US government shutdown concerns. President Donald Trump wants $5b to build a wall on the US-Mexico border, threatening a shutdown if funding is not secured. Today he cited the French protests as leverage to strength US borders, increasing concerns of a showdown between him and his Democratic counterparts.

The US Dollar aimed lower against its major counterparts as demand for the highly liquid and reserve currency waned, particularly during the first half of the trading session. During the same timeframe, the pro-risk New Zealand Dollar surprisingly succumbed to selling pressure. A clear catalyst seemed absent however. 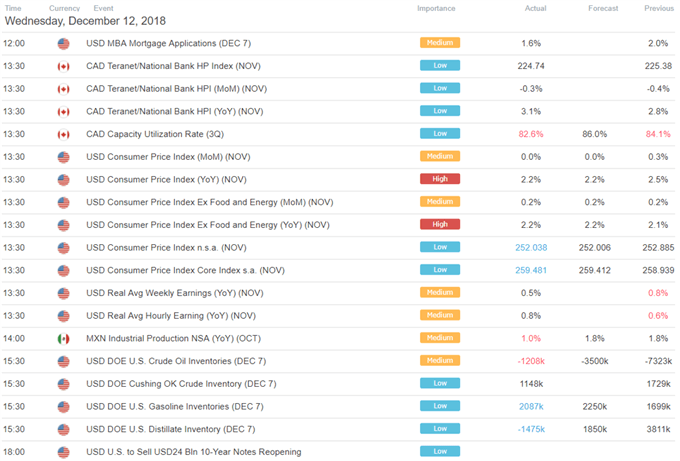