Crude oil prices succumbed to an eleventh day of consecutive losses, bringing the length of its losing streak to its most prolonged since at least 1984 as anticipated. Weekend OPEC comments from a meeting and an announcement from Saudi’s Oil Minister for the need to cut production by 1M b/d from October levels failed to stem a selloff in the commodity. This was partially because of an intense selloff on Wall Street.

The S&P 500, in the aftermath of forming a bearish reversal pattern pointed out last week, tumbled almost two percent as it clocked in its largest decline in a single day in almost three weeks. The NASDAQ Composite suffered about 2.78%. Drops in shares on Wall Street occurred amidst reports from Apple suppliers warning about weak demand.

This translated in US Dollar gains amidst safe haven bids which had a twofold impact on crude oil prices. First, a more expensive greenback makes the commodity relatively cheaper given that it is primarily priced in USD. Second, sentiment-sensitive petroleum prices often move with global benchmark indexes. Souring market mood can thus negatively affect crude oil.

The risk-off behavior in the markets benefited the Japanese Yen as carry trades were unwound. Meanwhile the British Pound was jawboned by Brexit headlines. After falling on reports of more opposition to UK Prime Minister Theresa May’s negotiation plan, GBP/USD attempted to pare losses (in vain) after reports from EU Chief Negotiator Michel Barnier that the Brexit treaty text is almost ready.

Meanwhile EUR/USD touched a new 2018 low amidst US Dollar gains and fears ahead of the next leg in Italian budget talks. Our Analyst Dimitri Zabelin will be hosting a live preview of the negotiations, covering how they may impact the Euro ahead. The event will begin Tuesday November 13th at 4:00 am GMT.

Ahead, Asia Pacific benchmark stock indexes may follow Wall Street lower which could continue upholding the Yen. The Nikkei 225 and ASX 200 are also at risk to renewed US auto tariff threats as Donald Trump is planning to discuss potential levies on European vehicles. This also risks weakening the pro-risk Australian and New Zealand Dollars.

Should sentiment continue souring, there may be room for more crude oil losses this week with US CPI data due later this week. Meanwhile, AUD/USD seems to be on the verge of a longer-lasting bearish reversal after prices fell through a near-term rising support line from October. This can be seen by looking at the Aussie 4-hour chart below. 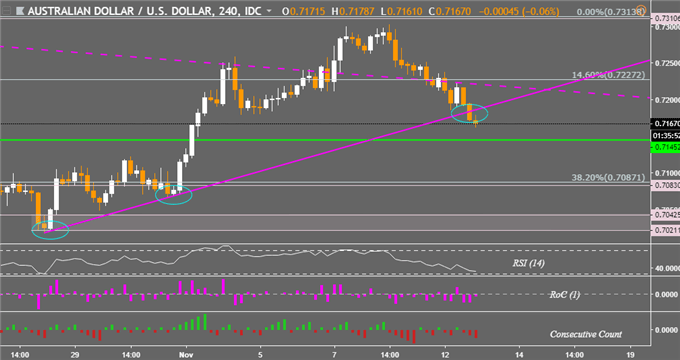