On Wednesday, global stock markets could have been characterized as behaving jubilantly. The Nikkei 225, DAX and S&P 500 climbed 2.16%, 1.42% and 1.09% respectively. This allowed them to trim some of their shaky performance in October. Generally, stocks were under fire last month as bigger fundamental themes such as Fed tightening, emerging markets fears and political uncertainty soured the mood in investors.

Despite the ‘risk on’ behavior in the last trading day of October, foreign exchange markets behaved rather oppositely. Pro-risk currencies such as the Australian and New Zealand Dollars largely underperformed while the anti-risk Japanese Yen soared. This may have been due to lackluster Australian CPI data and softer gauges of China’s industrial sector during APAC trade.

This placed those aforementioned currencies in a tough spot to reverse their progress ahead of European and US trading sessions. One FX major that shined above all was the British Pound, bolstered by signals that a Brexit deal could be reached by November 21st. Meanwhile sentiment-linked crude oil prices also diverged with stocks, falling after a report from the EIA that US output rose 3.8% in August to a record 11.346m b/d.

The Australian Dollar still remains stuck around a familiar area of former support now resistance at 0.70830. The pair has been struggling to make progress in either direction after bottoming on October 5th. However, the fundamentals seem biased to the downside and my AUD/USD short at 0.70839 with a daily close above 0.71452 still remains in play. You may follow me on twitter @ddubrovskyFX for updates to the setup. 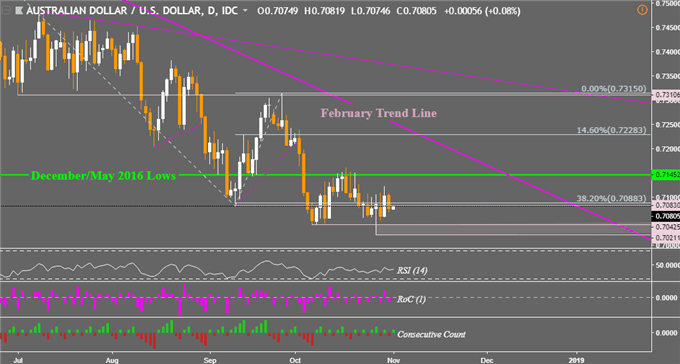 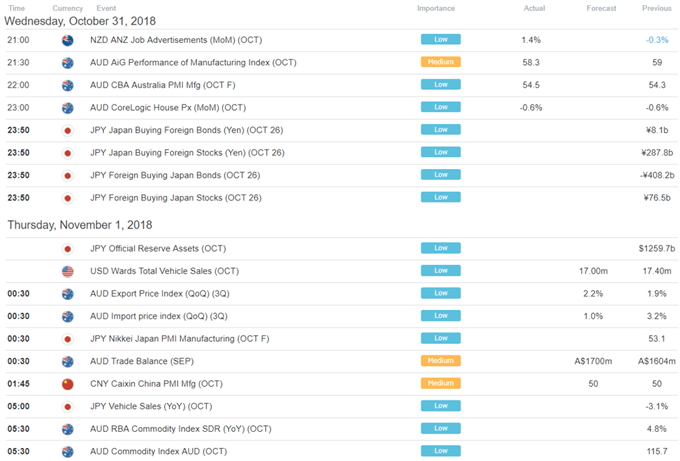