The British Pound was arguably one of the best performing majors on Thursday, aided by a couple of developments during the European session. First, you had a rally in UK government bond yields along with what appeared to be a corrective pullback in the US Dollar after persistent gains over the past few days. Then, Sterling got a further boost amidst a new Irish border proposal to help push Brexit talks forward.

Other notable FX gains were seen in the traditionally anti-risk currencies such as the Japanese Yen and Swiss Franc. Those gained traction amidst losses from APAC, European and US benchmark stock indexes as expected. The S&P 500 suffered its largest decline in a day (-0.82%) since June 27th. Equities have generally been under pressure amidst tightening global credit conditions as US government bond yields soared recently to multiyear highs.

Sentiment-linked FX such as the Australian and New Zealand Dollars underperformed against their major counterparts. But as a relatively ‘risk-neutral’ currency pair, AUD/NZD largely traded sideways and has been for some time. The difference in relative monetary policy stances from the RBA and RBNZ still support my AUD/NZD long at 1.09168.

We may see the deterioration in market mood echo into Friday’s Asia Pacific trading session, much like we saw yesterday. This would add further gains to the Japanese Yen while boding ill for AUD and NZD. Interestingly, there may be more trade war tensions on the horizon between the US and China.

On Thursday, it was discovered that Amazon and Apple were among numerous US firms impacted by a Chinese chip attack. Should Donald Trump pursue additional tariffs or protectionist measures against the world’s second largest economy as a result, there may be more risk aversion ahead.

Recently, I outlined my short EUR/USD trade setup. Prices were unable to reach the entry order though. As a result, the trade was modified given the pause in Euro’s descent. We entered short at 1.15159 targeting 1.13417. A stop will be administered once a daily close is achieved above 1.15740 which is also above the near-term descending resistance line. You may follow me on twitter for updates on it and other setups here @ddubrovskyFX. 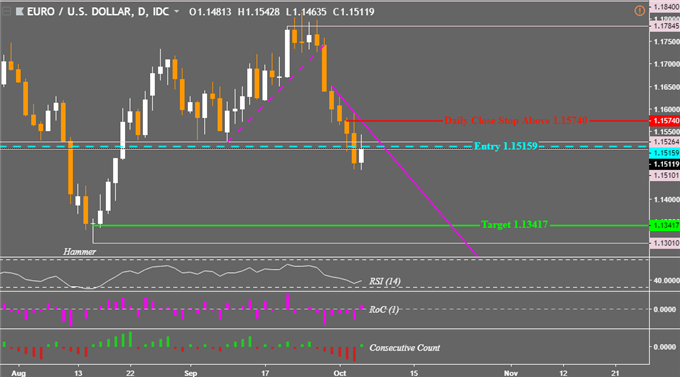 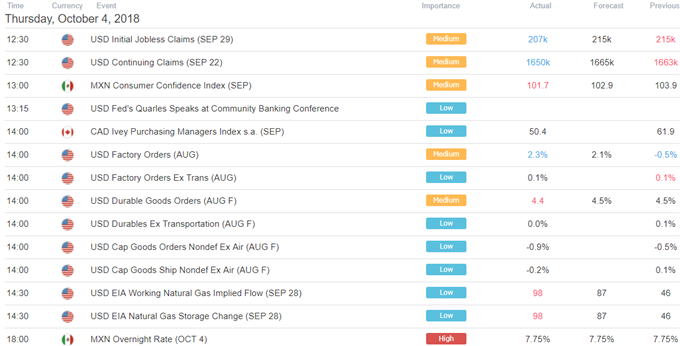