New Zealand Dollar currency traders are gearing up for heightened spot price action judging by the latest readings on NZDUSD overnight implied volatility. The measure spiked to 15.62% which is the fourth highest reading of the year and more than double its average over the last 12 months.

Elevated expectations for NZDUSD currency volatility is unsurprising, however, considering major event risk posed by Wednesday’s looming interest rate decision from the Reserve Bank of New Zealand (RBNZ) slated for 2:00 GMT. According to overnight swaps, the RBNZ is expected to cut its benchmark interest rate by 25-basis points at its upcoming meeting and another 25-basis points before year-end. 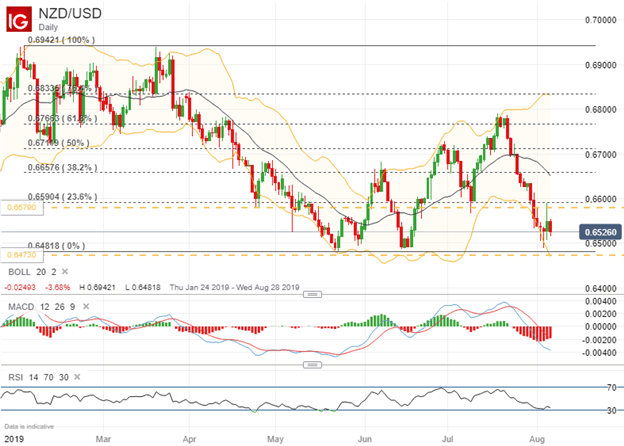 Judging by NZDUSD’s overnight implied volatility reading of 15.62%, currency traders might expect spot prices to range between 0.6473-0.6579 with a 68% statistical probability. The lower bound of the 1-standard deviation trading range rests beneath the year-to-date low for spot NZDUSD which could be tested if the RBNZ confirms the market’s expected interest rate cut currently priced in and provides dovish outlook.

That said, the 0.6500 handle could offer a bit of support considering spot NZDUSD has inked a series of higher lows since bottoming out in May. Conversely, a move to the upside in spot NZDUSD might be sparked if the RBNZ provides more measured forward guidance and relatively hawkish commentary. Aside from the August RBNZ meeting which falls on Wednesday’s trading session, central bank governor Adrian Orr will also testify to New Zealand Parliament at 20:10 which could reveal additional insight on the economy and future monetary policy decisions. 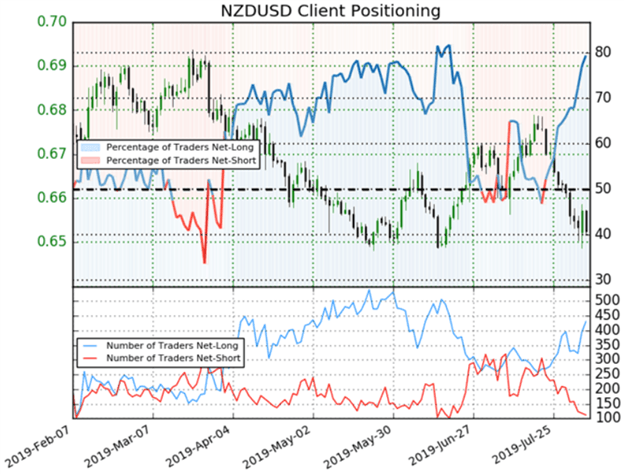 According to IG Client Sentiment data, 79.3% of spot NZDUSD retail traders are net-long resulting in a long-to-short ratio of 3.84. Also, the number of traders net-long is 13.2% higher than last week whereas the number of traders net-short is 52.5% lower than last week. We typically take a contrarian view to crowd sentiment, and the fact traders are net-long suggests spot NZDUSD prices may continue to fall.