Since the last Reserve Bank of New Zealand rate decision on June 25, the New Zealand economy has seen steady improvement, but perhaps not enough to dissuade policymakers that more stimulus is necessary in context of a global trade environment under siege thanks to the US-China trade war.

The two big New Zealand data releases in the interim period since the June RBNZ meeting both suggested that the RBNZ economy was on mixed footing. Q2’19 New Zealand inflation data showed that price pressures were exactly as economists forecasted, at 0.6% (q/q) and 1.7% (y/y) – an increase from prior levels, but still below the effective 2% medium-term target. Elsewhere, the most recent labor market report showed that the New Zealand economy saw its unemployment rate creep higher to 4.3% in Q2’19.

With the US-China trade war raging, and evidence starting to emerge that global growth is being dragged down in the process, the RBNZ seems likely to take additional steps to shore up the economy. As a result, overnight index swaps are pricing in a 99% chance of a 25-bps rate cut. To this end, markets are quite aggressive in dovish pricing over the coming months, with a 45% chance of a another 25-bps rate cut coming in September; if not by September, then there is a 71% chance of a final 25-bps rate cut this year by November. With the RBNZ leaning dovish for the foreseeable future, the path of least resistance may be lower for the New Zealand Dollar. 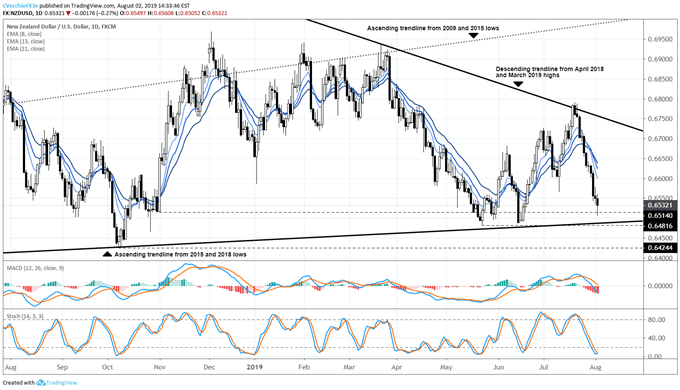 In mid-July, NZDUSD prices failed to breakout above the descending trendline from the April 2018 and March 2019 highs. In turn, NZDUSD has quickly fallen back towards its yearly lows, with prices quickly approaching the ascending trendline from the 2015 and 2018 yearly lows, which provided support earlier this year in May and June around 0.6480/0.6500.

Losses may accelerate in the coming sessions as the yearly lows come under pressure in NZDUSD. Momentum remains firmly negative, with price below the daily 8-, 13-, and 21-EMA envelope. Similarly, Slow Stochastics are nestled in oversold territory, a welcomed development for bears. Lastly, daily MACD, has continued to move below its signal line in bearish territory. If the yearly lows break around 0.6480/0.6500, then a drop to the 2018 low at 0.6424 would increase in likelihood. 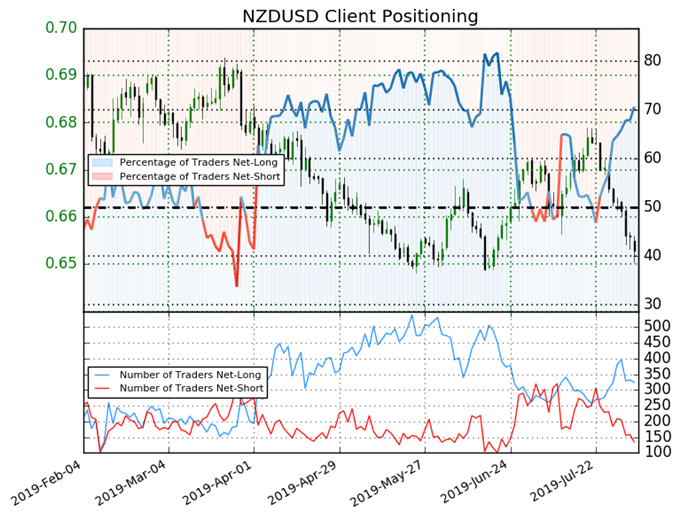