Janet Yellen, the American economist now serving as the 78th US Secretary of Treasury, who also helmed the Federal Reserve (2104 to 2018), told NBC on Sunday the country is not currently in recession.

In a July 24 edition of “Meet the Press,” ahead of the much-anticipated July 26-27 FOMC meeting and the release of the second quarter GDP later this week, Yellen said “there’s a path” to avoid recession.

The Treasury Secretary acknowledged an economic slowdown, and that job creation will continue to soften. However, she said the addition of approximately 375k jobs a month does not suggest the economy is in recession.

Questioned about her slightly optimistic view amid the latest contraction of business activity and the increase in jobless claims, the Treasury Secretary stressed she was not suggesting that a recession will be avoided.

The US Bureau of Economic Affairs announces its official Q2 reading on Thursday, following a contraction in the previous quarter. When asked about the expectations of another negative GDP number, Yellen recognized that in the past, a common definition of recession has been two consecutive quarters of contraction but stressed that recession really means a broad-base weakness of the economy, where all sectors are affected. She accentuated that such scenario is not the case of the US, at least right now.

Yellen observed that even if Thursday’s Q2 GDP shows a decline, she would be surprised if the National Bureau of Economic Research - an organization that considers a broader range of data- declares the US to be in recession as the labor market is still very strong.

During the interview, Yellen highlighted the strength of the labor market as it has brought people back to work after the COVID pandemic lockdowns that led to rapid economic growth of around 5.5% last year. Nevertheless, she recognized that the economy is currently in a period of transition that is necessary and appropriate. She emphasized that consumer spending, industrial output, credit quality and household balance sheets are still in good shape.

When the interview turned to inflation, Yellen commented that the high level of inflation needs to be addressed. And, as we saw from the most recent CPI print, headline inflation remains at 40-year-highs of above 9%. But, we’ll get the next piece of that inflation puzzle shortly after the FOMC rate decision on Wednesday. Friday morning brings the release of PCE data for the month of June and this is the Fed’s preferred inflation gauge. It’s expected to print at 4.7% versus last month’s 4.7% read, which would illustrate a bit of stabilization, albeit at elevated levels of inflation. 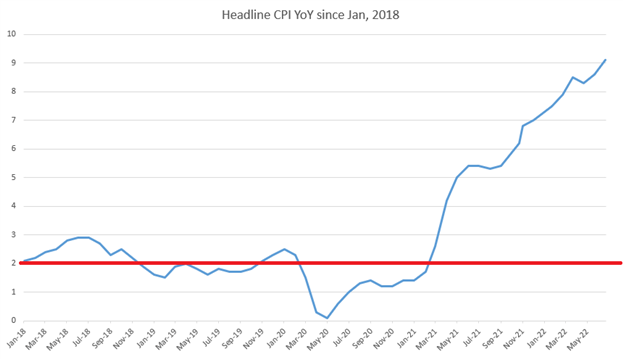