The Anatomy of a Viral Asset: GME and Beyond

GameStop’s spectacular rise and fall signals that a new age of financial market trends may be emerging. What does that mean for volatility?

GameStop: The Start of a New Trend?

The GameStop phenomenon could mark the beginning of a trend in markets: social media-induced asset price inflations. In short, assets can now go viral. What this means is the cultural zeitgeist may now bleed into markets and exacerbate uncertainty in a field that is fundamentally unpredictable and already prone to irrational oscillations.

Between January 12th to the 28th this year, GameStop (GME) rose from under $20 to over $450, marking a total gain of approximately 2,400%. On a day-by-day basis, this averages to roughly earning 150% per day over the course of 16 days. After peaking, the meme stock plunged and is now trading below $200 a share. But this is not the only meme stock on the market.

Trading-minded activity on Reddit continues to evolve as membership grows, and the number of potentially new “viral” assets increases. Simultaneously, the amount of total capital from the accumulation of these new users also rose at a commensurate rate. This could set up for future meme stocks to experience potentially greater bouts of volatility.

What Stocks May Go Viral?

The famous subreddit page r/wallstreetbets has to this day accumulated over 10.6 million members or “degenerates”, as the page playfully calls them. The meme stock craze took off when users attempted to initiate a short squeeze on heavily-shorted securities like GameStop and AMC. Many viewed it as a “movement” and rebellion against institutional investors.

The narrative echoes the archetypical story of David vs Goliath, of retail investors against the institutions. Consequently, this “mobilization of resentment” led to a surge of capital flowing into a stock (GME) with a fundamental basis of such poor repute, that up until recently it was the most shorted security in the S&P 500.

This adds even more depth to the saying, “The market can stay irrational longer than you can stay solvent”, usually attributed to John Maynard Keynes. Investors now have to understand a novel brand of random, meme-based humor about securities that are already being analyzed from a financial, economic and social perspective. This is now a new “element” on the proverbial periodic table investors will have to contend with.

Digression aside, the emotional spectacle of the GME surge caught media-wide attention, and it seems likely that this will repeat itself with different securities. Below is a non-exhaustive list of so-called meme stocks that have frequently appeared on the subreddit page and may have potential to experience volatility of the same magnitude or greater as GME or AMC, another early favorite. 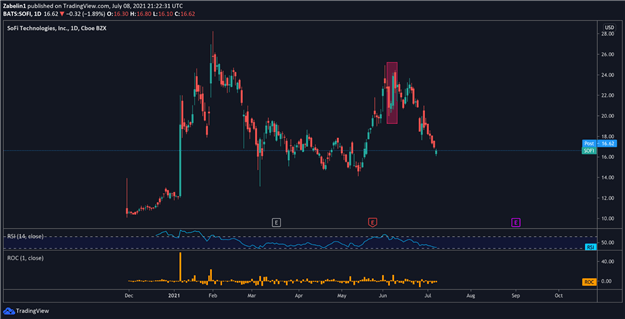 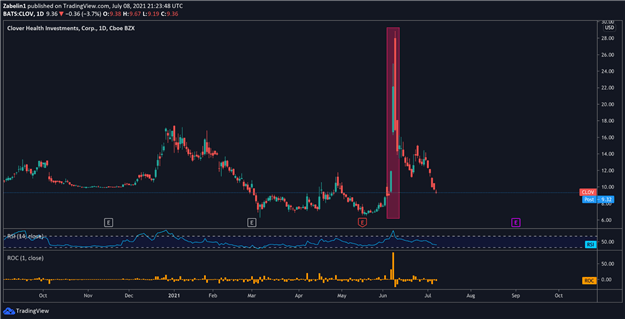 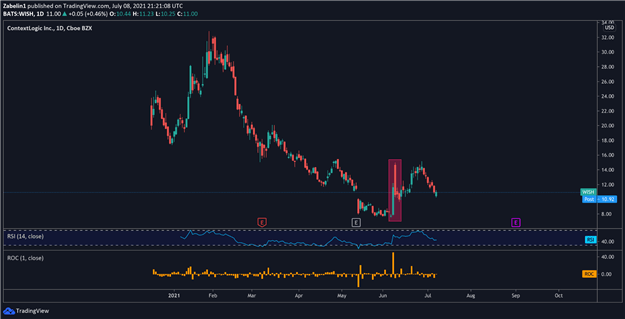 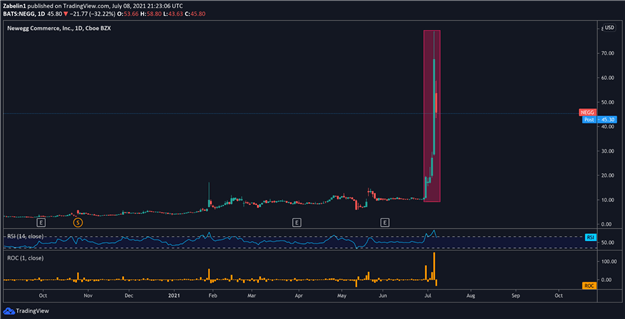 Half of these qualify as having a relatively larger market cap (roughly more than US$10 billion), while the others can be categorized as “small-cap” (less than US$10 billion) in this context. All of them except for NEGG IPO’d in the past 7-8 months, but every single one of them saw a spike in early June. The catalyst was unclear, and it appears no fundamental explanation can be given – that’s where the uncertainty lies.

Still, the relatively small capitalization for all of these names make them more prone to bouts of outsized volatility for every dollar in and out relative to securities like Apple, which have a trillion-dollar market value. This is a double-edged sword. On one hand, it can provide attractive rewards given the prospect of a triple-digit price surge, amplified by comparatively thin liquidity in comparison to, say, Amazon.

On the other hand, during a spike, emotional traders who fear being left on the sidelines jump in at irrationally-high prices where all that is offered are progressively skimpier risk premiums. Compounded by the use of derivatives and of leverage, the potential losses could be astronomical if prevailing sentiment reverses.

What Happens When the Laughing Stops?

If the volatility in these and similar assets becomes eye-catching enough, it could ripple out into the broader financial markets and lower the threshold for risk tolerance. This might manifest in capital flows as an exodus from comparatively risky assets – equities, sentiment-sensitive currencies the Australian and New Zealand Dollars, and cyclical commodities like crude oil – and into the haven-linked US Dollar and anti-risk Japanese Yen. Treasury bonds also stand to benefit.

In times of turmoil and uncertainty, traders put a premium on liquidity over prospective returns if the cumulative market mood indicates an aversion to risk. However, when negative sentiment reverses – barring any developments that could exacerbate the selloff – these flows are likely to change course as well.

Looking ahead, the growing intersection of social media and markets may open the door for additional volatility if the irrational nature of the former amplifies the uncertainty of the latter. The emotional drive behind meme stocks and their obscurity – as well as the apparent meaninglessness (in more traditional analysis terms) of some newly market-moving considerations (like viral exhortations to “HODL!”, or stay long amid a selloff) – add another layer of complexity that traders will now have to incorporate into their strategies.