The British Pound may face heightened liquidation pressure following another unsuccessful round of EU-UK Brexit negotiations. On Friday, European chief negotiator Michel Barnier said that at this stage, an agreement with London appears unlikely. His counterpart David Frost reinforced this message, adding that “little progress” had been made with their European partners.

The geopolitical complication could jeopardize early signs of economic stabilization in the UK. On Friday, markets were caught off-guard after preliminary manufacturing and services PMI data for August printed better-than-expected figures. However, doubt about a Brexit resolution and increased likelihood of a messy divorce could darken the outlook and later be reflected in weaker economic indicators.

Key issues over fishing rights and enforcing a “level playing field” framework to prevent British businesses from undermining European ones continue to be major sticking points among a myriad of issues. Prolonged delays in reaching a consensus ahead of key deadlines in the fall could begin to weigh on the British Pound as the clock ticks. The next round of formal negotiations will take place on September 7. 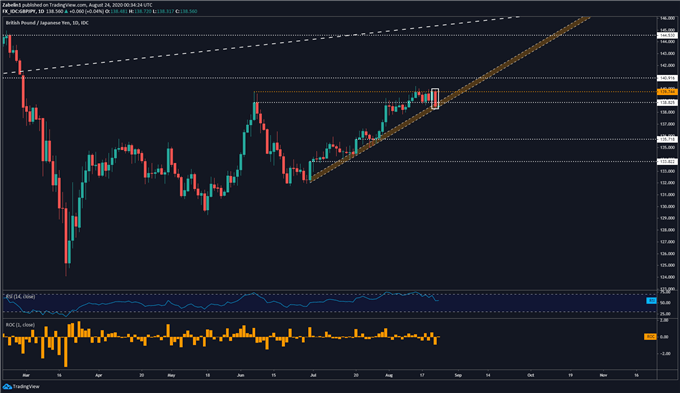 The biggest known event risk for the week ahead will likely be the annual Jackson Hole symposium where Fed Chairman Jerome Powell is expected to give a review of monetary policy and the outlook. The Fed’s message so far has been, in short, that they will support financial stability and economic integrity by adjusting the size of its balance sheet and the kinds of assets they purchase within the scope of their mandate.

An emphasis on this message may prolong the US Dollar’s selloff if the Fed’s support buttresses market-wide risk appetite. Despite comments on risks to financial stability and the precarious and uncertain nature of an economic recovery, markets on balance appear to largely shrug at such comments. Mr. Powell may also hesitate to reveal too much ahead of the FOMC rate decision on September 16.

Having said that, as I wrote in my piece about the 2020 US presidential election, the RNC this week may reverse USD losses. Democratic presidential candidate Joe Biden’s lead over Mr. Trump continues to widen, particularly after the DNC from August 17-20 helped boost his net favorability.

Out of a sense of urgency, the President’s rhetoric on certain policies may therefore be bolder than usual in an attempt to gather additional support and draw the spotlight to him. Uncertainty around the impact of the implementation of these measures if he is re-elected may unnerve markets, particularly if polls start tilting in his favor. This may catalyze a flight to havens and push the US Dollar higher.

ASEAN Summit Takes Place in Vietnam – RCEP to be Discussed?

The Association of Southeast Asian Nations (ASEAN) will be convening this week with Vietnam holding the rotating chair of this round online through August 30. One of the topics to be discussed will likely be the Regional Comprehensive Economic Partnership (RCEP) which is expected to soon be signed. Having said that, intra-regional geopolitical complications have caused India, a key member, to jump ship.

New Delhi’s reluctance to join what would be the world’s largest trade agreement in history – encompassing 50 percent of world population and one third of global GDP – reflects concern about cheap Chinese-made goods flooding the market. Tension between Beijing and New Delhi have been escalating, with the most recent incident occurring along a disputed border known as the Line of Actual Control (LAC) in the Himalayan Mountains.

While it is unlikely that India will change its mind before the meeting, progress on intra-regional cooperation could boost domestic markets. Global economic stabilization and accommodative policy from central banks have helped boost risk appetite and demand for emerging market assets. Therefore, additional signs of political progress may bolster risk appetite and push ASEAN FX higher.