71 DAYS UNTIL THE US PRESIDENTIAL ELECTION

With less than three months to go until November 3, incoming polling data on US President Donald Trump and former Vice President Joe Biden may start to unnerve – or bolster – market sentiment. While the Democratic National Convention did not appear to stir markets, polls taken after the three-day event indicate that Mr. Biden’s net approval was higher after the DNC concluded. 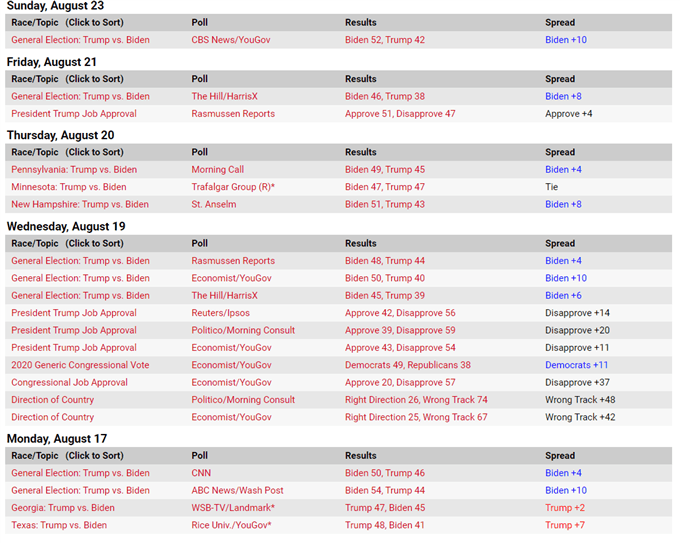 The Republican National Convention will take place August 24-27, with President Donald Trump speaking every night. This runs contrary to the tradition of having the presidential candidate speak only once, typically only on the night where they formally give an acceptance speech. While breaking away from convention has been Mr. Trump’s modus operandi, the move may hint at an underlying sense of urgency in generating more support.

The latest polling figures and widening lead between Mr. Biden and the President support this narrative. This idea is also reinforced by the RNC lineup: 5 out of the 12 speakers – or 41% – are of the Trump family. Even support within Mr. Trump’s own party appears to be weakening. In an open letter, over 70 former Republican national security officials have officially thrown their support behind Biden and decried Trump’s first term:

"Through [Trump’s] actions and his rhetoric, [he] has demonstrated that he lacks the character and competence to lead this nation and has engaged in corrupt behavior that renders him unfit to serve as President."

The strong language is not lost on anyone, and as a result, Mr. Trump may double down on his rhetoric in an effort to galvanize what appears to be ebbing support – and this is where markets may become uneasy. More forceful anti-China sentiment and hints at heightened trade conflicts with Europe and the East Asian giant may temporarily put a pause on the US Dollar’s spectacular decline if such comments catalyze a flight to havens.

Since topping in mid-March at 1.4169, the US Dollar Index – using a currency basket of USD vs JPY, AUD, EUR and GBP – has fallen over 12 percent and is now hovering at a 2-year low. However, price action since August 3 shows that the index has been trading in a relatively directionless manner. The reluctance to slide could mark the beginning of a reversal, though if so, the USD’s gains may be temporarily capped at 1.2630.