Cycle-sensitive crude oil and stock prices fell amid deepening worries about the economic impact of the coronavirus outbreak, with the former move amplified by the collapse of the OPEC+ output cap scheme. Perennially anti-risk US Treasury bonds and the Japanese Yen rose, the former attracting haven demand and the latter seemingly benefiting from liquidation of JPY-funded carry trades.

The responses from gold prices and the US Dollar have been more confounding. The Greenback seems to be of two minds, gaining on commodity-linked FX but falling against the Euro, Yen and Swiss Franc. The yellow metal probed higher – as might have been expected from the archetypal non-interest-bearing asset at a time when yields plunged to record lows – but failed to find follow-through (at least for now).

Indeed, gold’s rise is in the single digits since the start of the year (8.93 percent as of the snapshot below, taken on 10 March 2020 at 7:28 GMT). The bellwether 10-year Treasury note yield has shed over 60 percent while the priced-in 2020 policy outlook implied in Fed Funds futures has recorded a move than seven-fold shift in the dovish direction over the same period.

That dramatic swell in stimulus bets now reflects expectations now amounts to near-certainty in a further 75-100 basis point reduction in the benchmark lending rate after last week’s surprise 50bps emergency cut. This implies a move to within a hair of the record-low 0-25bps target Fed Funds range, if not an outright return to it. So, markets have already priced in nearly all the conventional easing that could be had. 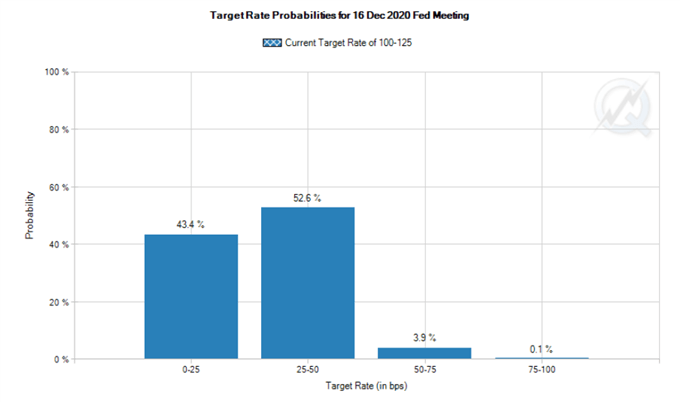 Interestingly, this has left the US Dollar with a narrow yield advantage against its major counterparts. The dramatic shift in the policy outlook has understandably translated into a shrinking rate gap between the US, where rates had been highest among the G10 economies at the start of the current easing cycle. Nevertheless, the front end of the US yield curve still offers a positive return (~58bps) compared to alternatives. 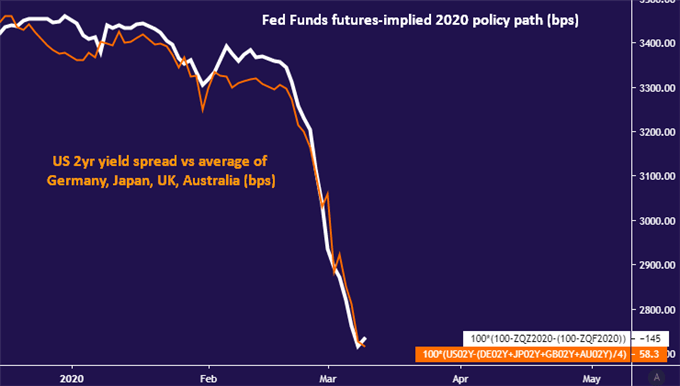 This might explain gold’s reticence to some extent. The pace-setting anti-fiat asset is typically animated by the global monetary policy outlook above all, and ubiquity of the US Dollar as a reserve currency means the Fed is the driving force there. If market pricing already reflects as much of a dovish shift as might be reasonably expected, the metal might be finding itself without fuel for gains.

Following on from this could also be a USD recovery against those currencies where it has been suffering a one-sided adjustment in relative yield bets. The Euro is perhaps the most eye-catching among these: it has roared higher, which may be explained by the ECB’s limited room to keep pace with on-coming Fed easing. Its latest target variable – the Deposit Rate – is already in negative territory.