The outlook for the global economy is taking darkening under the fear around the coronavirus’s impact on activity. On Monday, the Organization for Economic Cooperation and Development (OECD) released its interim economic forecasts for March, and the results were troubling. According to the group, the group the global economy could grow only 2.4 percent in 2020 – a significant throttling of the 2.9 percent projected before the virus seized the global headlines. In historical terms, this global pace would be the worst experienced since the 2009 – another remarkably unflattering reference to a period highlighted by the worst financial crisis and one of the worst slumps in modern history.

Something to consider with this unflattering forecast was that it was on the more optimistic end of the curve. According to the group, if the virus’s spread had not peaked in the first quarter of the year as China has attested, the globe could see expansion grind down to a mere 1.5 percent. At such a pace, regions and countries like the Eurozone and Japan that are already flagging could tip into a technical recession. 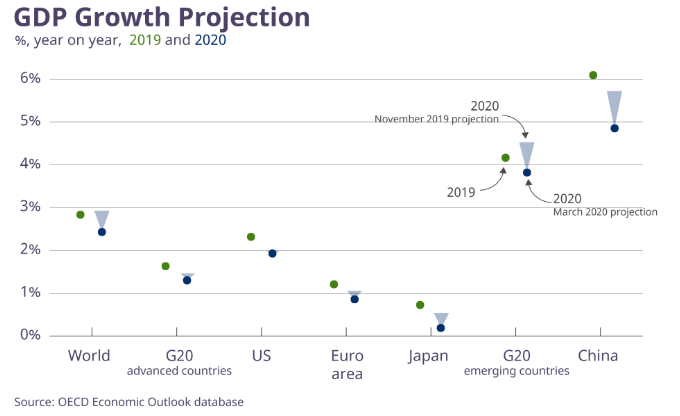 To follow their troubling forecasts, the group would go on to recommend that central banks act to supply a cushion to the financial markets and urged governments to act proactively to curb the spread of the contagion while also shoring up healthcare systems and reinforcing consumer and business financial stability. There is some concern that central banks are too low on resources to fight another such fire and governments have moved further away from collaborative growth over the past few years. Yet, they may be heading the call under the circumstances.

Google Search for Recession and Stimulus

It was announced Monday that G7 finance ministers would hold a conference call Tuesday to discuss the market’s recent disruption and economy’s exposure along with what can be done to curb such troubles before they worsen. The markets are looking for large programs that are proactive rather than reactive, but that could be difficult. Some large stimulus programs have been suggested in previous years from major economies but have yet to gain traction through their respective governments. And, where there are active programs such as the one recently announced in Japan (3.2 trillion Yen in supplementary budget announced in December), the promise has not cooled concern.

Shortly after the finance ministers’ announcement, it was already reported that leaders of the same groups’ central banks would also be in attendance on the call. That reflects a probable liquidity element to the discussion that is more readily accommodated. Over the past three days, the Federal Reserve, Ban of Japan and Bank of England are just a few of the major policy groups that issued statements that they were prepared to do anything necessary to ensure stability – including cuts and unorthodox policy. It is likely that governments will defer to the central banks, but their capacity to act may exaggerate the skepticism that is already underlying the system.

The Markets Between Hope for Support and Fear of Fallout

With the aforementioned headlines, it would seem a troubled environment whereby a market as hard pressed as the one we saw last week would simply default to its prevailing selloff. However, that didn’t seem to be the case through the first half of the New York session. In fact, there was something of an uneven rebound before the reports of the G7 call, suggesting either the market was anticipated official follow up or was naturally taking a breather. The S&P 500 put in for the first advance in 8 trading day with volume on the SPY ETF pacing off the pain trade from the week before. The 200-day average was around the highs the session tested through the first half of the day. Traders should remain cautious however as high volatility can readily turn the markets without warning. 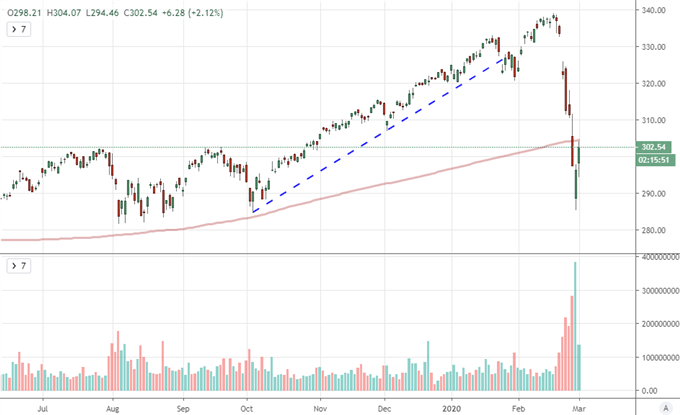 While optimism or pessimism following the G7’s response is important to watch in the global markets, it is also worth keeping track of the performance to be found between key segments of the economy. Manufacturing was broadly flirting with recession across the globe in the aftermath of trade war actions, but the curb on business may also put greater pressure on services. The former industry is much more representative of total output for emerging market economies while the latter is heavily weighted towards services. Below is a chart of the VEA developed market and EEM emerging market ETFs which will be interesting to compare and contrast alongside their respective growth figures. 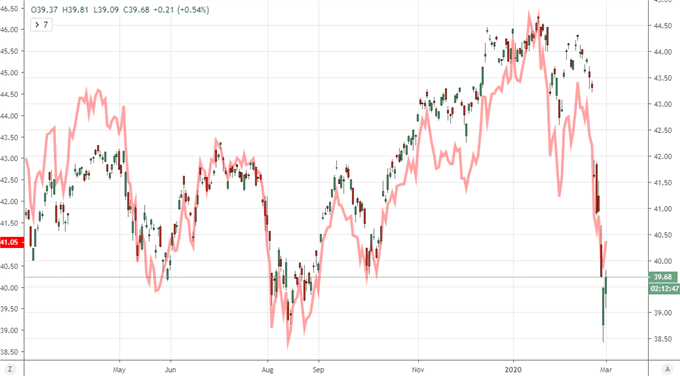