The Singapore Dollar, Indonesian Rupiah, Malaysian Ringgit, Philippine Peso and Indian Rupee collectively soared against the US Dollar this past week. ASEAN and Asia Emerging Market FX have generally been on an appreciation course as risk appetite improved on US-China trade deal bets. Last week was a moment of realization as both countries ended up avoiding raising tariffs against each other by the December 15 deadline.

The importance of an agreement underscored why PHP and SGD paid little attention to local fundamental headwinds. For the former, the Philippine Central Bank (BSP) hinted at further near-term easing to come. In Singapore, retail sales unexpectedly slumped 4.3 percent y/y in October. The hope is that a cooldown in the trade war can revive slowing global growth, boost business investment and fuel capital inflows. 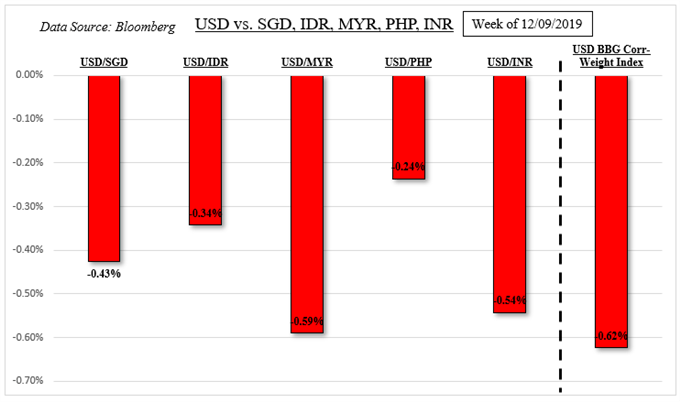 In exchange for agricultural purchases, the United States offered to revoke the planned December 15 tariff hike while also reducing the levy rate on $120b of Chinese goods to 7.5% from 15%. President Donald Trump anticipated that China would purchase $50b in agricultural products. The USTR reported that the country made a 2-year commitment for about $40-$50b in AG goods per year.

The reaction in financial markets on Friday was rather lackluster with the S&P 500 and MSCI Emerging Markets Index little changed from Thursday. There may be some cautious skepticism from investors for understandable reasons. Mr Trump hinted that he could wait until after 2020 for “phase two” talks and specifics of key underlying issues such as intellectual property theft were absent.

White House Economic Adviser Larry Kudlow also reminded that the country could reimpose tariffs on Chinese imports should there be disputes ahead. This is a quite familiar road that we have already been on before. The trade truce from the G20 Summit back in the summer eventually fell apart, sparking risk aversion. The road ahead will be even more challenging as sticky issues could be harder to resolve without certainty.

There could be a cautiously upbeat tone from investors as we approach the remainder of the year. The inverse relationship between my ASEAN-based US Dollar index and the MSCI Emerging Markets Index has strengthened to a -0.76 correlation coefficient. A value at -1 indicates perfectly inverse dynamics. Should the latter continue its upward trajectory, the USD may continue seeing general weakness against ASEAN FX. 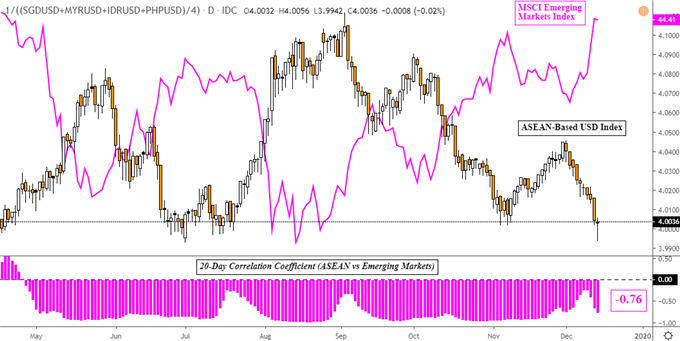 On Thursday, the Bank of Indonesia is largely anticipated to leaves its benchmark 7-day reverse repo rate unchanged at 5.00 percent, making for a total of 100bps worth of reductions in 2019. The central bank slowly shifted its focus this year away from upholding the Indonesian Rupiah as the currency strengthened. Earlier this month, the Bank of Indonesia hinted that it still had room to ease monetary policy further.

But, they also expect to see the impact of easing in the first quarter of next year. As such, we may not see an emphasis on further cuts in the near-term and the USD/IDR will likely remain focused on risk appetite. On Friday, the Malaysian Ringgit will be watching November’s local CPI report. Malaysian prices are expected to rise 1.1 percent y/y, the same pace as in October. A softer outcome may see the MYR cautiously weaken.

The US Dollar could appreciate if local markit manufacturing PMI and industrial production surprise higher in the week ahead. Some optimism around US-China trade deal bets might make their way into data. The third round of Q3 GDP and the Fed’s preferred measure of inflation will also cross the wires. On the whole, data has been tending to undershoot economists’ expectations since September. This poses as a downside risk for USD should 2020 Fed rate cut bets come into focus.