The US Dollar could appreciate against the Indian Rupee on a combination of fading local easing bets and softening Indian economic data. This week offers a plethora of event risk from the US such as GDP data and the Federal Reserve monetary policy announcement - both on Wednesday. Lately, a combination of US-China trade deal expectations and fading “no-deal” Brexit odds have been improving risk appetite.

A continuation of these trends could pave the way for a less-dovish US central bank, denting upside progress seen recently in the S&P 500 and MSCI Emerging Markets Index. Meanwhile, the Rupee is vulnerable to rising aggressive easing bets from the Reserve Bank of India. The country’s financial wellbeing has been teetering amid trouble stemming out of the banking sector with GDP chugging along at a 6-year low.

As a result, growth in commercial credit to the non-manufacturing sector has been slowing. It now sits at its weakest pace since 2017, with recently enacted corporate tax cuts and lowered lending rates expected to stimulate the economy. Since then, the benchmark NIFTY 50 has gained cautiously. Financial services consist about 40 percent of the index though, leaving it at risk to rising concerns about credit conditions.

Further souring data may weaken the INR, and on the first day of November local Markit manufacturing PMI will cross the wires with composite numbers due next week. The latter has been indicating contraction. The former still shows growth, but it has been dwindling. Another disappointing round of PMI data, following the slowdown seen across the world, bolsters the case for RBI cuts. 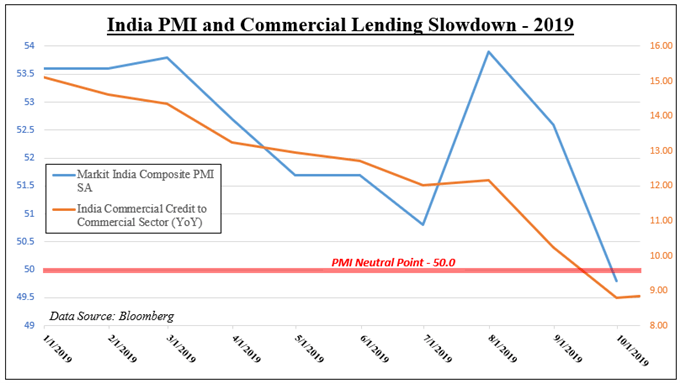 Recent technical signals in USD/INR do hint that a turn higher could be due soon. On the daily chart, the currency pair has been carving out a Descending Triangle candlestick pattern. This is usually a bearish continuation formation, but at times can mark a reversal of the downtrend. After INR tested the ceiling of the triangle on October 16, prices have been falling towards the floor. The latter is a range between 70.35 to 70.58.

A breakout to the downside (with confirmation) may pave the way for a resumption of the decline since September. In the near-term, positive RSI divergence shows that there is fading momentum behind recent weakness. This can at times precede a turn higher, or translate into consolidation. A climb to the ceiling of the candlestick pattern with an upside breakout opens the door for a retest of the September high. 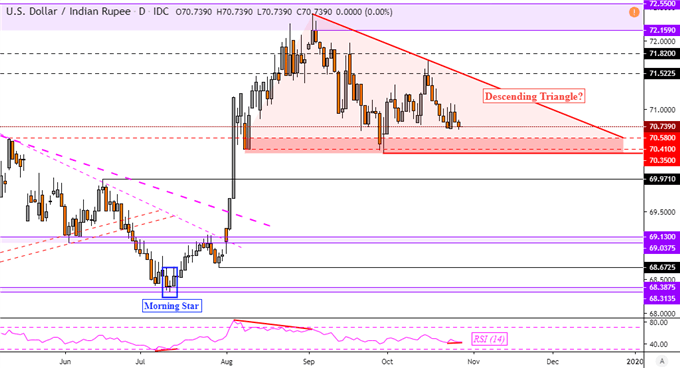 Zooming in on the USD/INR 4-hour chart, positive RSI divergence also offers a signal that a turn higher could be in store. 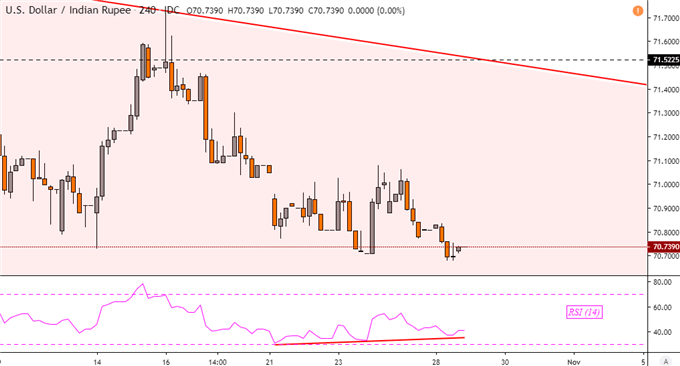