US Dollar Forecast Versus Indian Rupee, RBI to Cut to 9+ Year Low?

Two weeks ago, India’s Finance Minister Nirmala Sitharaman announced corporate tax cuts in an effort to stimulate the economy. This followed the softest pace of local economic expansion (5.0% y/y in Q2 2019) in over 6 years. For reference, GDP was at 8.1% y/y growth in Q1 2018. Meanwhile, inflation has been slowing from a 5 percent growth rate in 2018. Hopes of fiscal stimulus initially boosted the Nifty 50 over 5 percent.

Now, the markets are looking to the Reserve Bank of India to keep supporting the economy when it announces its next monetary policy announcement on October 4. They anticipate it to deliver a fourth reduction in benchmark lending rates this year, bringing India’s repurchasing rate down to 5.15 percent from 5.40. As a reminder, this rate started at 6.50 percent at the beginning of this year.

That would be its lowest rate in over 9 years, and its reduction is arguably warranted. In addition to deteriorating local conditions, the external environment is also looking quite unfriendly. Next week, the US and China are set for key talks regarding trade and if negotiations fall apart, it would further weigh on global growth prospects. This is as the United States launches a new front across the Atlantic.

As such, we may see the RBI leave the door open to further easing down the road which may weigh against the Indian Rupee. In the long-run, should trade talks falter, the US Dollar could outperform INR on haven demand thanks to its status as the world’s reserve currency. In the near-term though, a disappointing US jobs report may offer a temporary boost to USD/INR on Fed easing bets as gold rises.

Learn more about what NFPs are and how you can trade it!

On a daily chart, USD/INR continues to form a Descending Triangle bearish candlestick formation - highlighted earlier this week. The ceiling/resistance of the pattern was reinforced after prices recently failed to breach it. This could pave the way for another test of the floor at 70.41. If that area is taken out, it would open the door to prolonging the dominant downtrend. 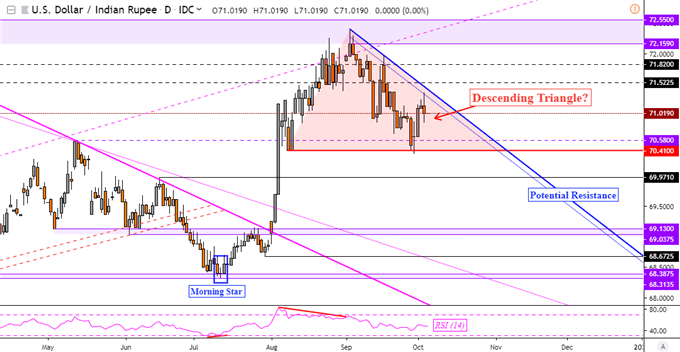 Meanwhile, looking at India’s benchmark Nifty 50, the index is looking to perhaps retest former rising support from 2016. This comes after a top that reinforced resistance as a range between 11600 and 11706. Clearing support at 11108 would expose August and September lows. If those are breached, that would open the door to another attempt at resuming the dominant uptrend. 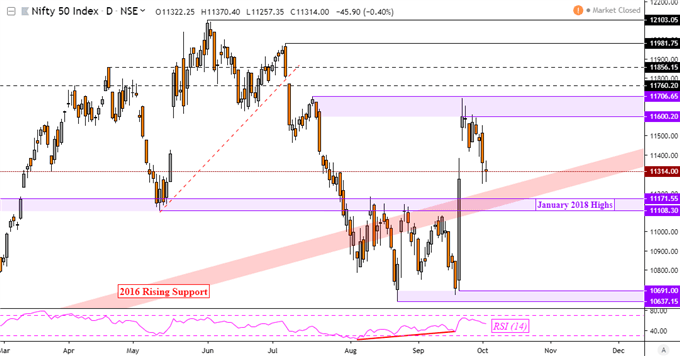