The US Dollar accumulated a cautious recovery against its major counterparts this past week, but much of that strength failed to transpire into ASEAN and Asia Pacific currencies. Some of the gains in the US Dollar could be derived from weakness in the Euro and British Pound towards the end of last week as uncertainty lingered over the fate of a UK Brexit extension.

Meanwhile, what appeared to be progress in US-China trade talks helped support the MSCI Emerging Markets Index. The Office of the United States Trade Representative noted that the US and China are “close to” finalizing sections of the agreement the two nations reached earlier this month. The Philippine Peso and Indian Rupee aimed cautiously higher.

Arguably, the Indonesian Rupiah was the best-performing ASEAN currency against the Greenback. This is despite the Bank of Indonesia delivering a rate cut as it emphasized its data-dependent approach. Currencies that didn’t find much support were the Singapore Dollar and Malaysian Ringgit. For the former, this marks a pause in its aggressive rally from earlier this month. 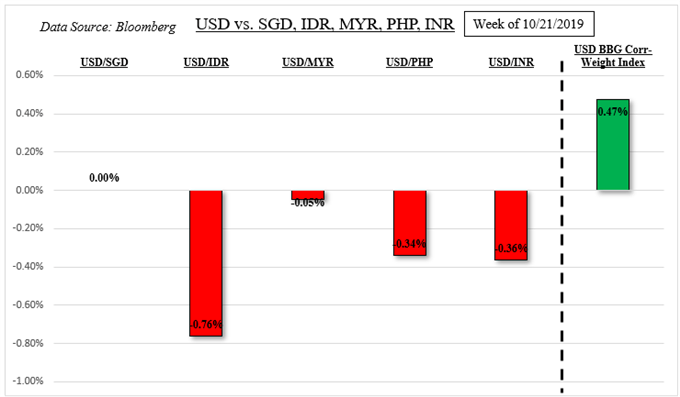 The week ahead is loaded with a plethora of event risk, include the threat for global growth should US-China trade tensions escalate. A key issue ahead of the APEC meeting in Chile, where the two nations may sign a deal, is the Hong Kong Bill passed in the US House. It could lead to economic sanctions against China for their actions that undermine “freedoms and autonomy in Hong Kong”.

This past week, Vice President Mike Pence offered hawkish notes on Beijing. This resulted in China’s Foreign Ministry Spokeswoman, Hua Chunying, to express strong indignation of his speech. If tensions heat up again, we may see a reversal in near-term upside progress made in the S&P 500 and MSCI Emerging Markets Index. Such risk aversion would likely boost the haven-linked US Dollar against SGD, IDR, MYR, PHP and INR.

Moreover, this uncertainty may keep the Federal Reserve focused on a data-dependent monetary policy approach. This week, the central bank is expected to deliver a 25bp rate cut on Wednesday. Odds of another equivalent reduction by year-end are relatively low. As such, hesitating to commit to further easing also risks souring sentiment. The Fed sees its cuts as insurance-based moves rather than a start of a new easing cycle.

In addition to trade wars and the Fed, ASEAN currencies may see volatility that stems from external economic event risk. The United States is going to release the first estimate of 3Q GDP, October’s jobs report and ISM manufacturing data. Outcomes are still tending to disappoint relative to economists’ expectations as of late, opening the door to further disappointing surprises.

More of the same ahead would test key fundamental forces in financial markets. On the one hand, softer data would likely fuel Fed rate cut bets. On the other, slowing conditions from the US would continue underpinning concerns over the health and vigor of the global economy. On balance, this could sink investor confidence, resulting in them pulling capital out of riskier investments (emerging markets), and into the safety of government bonds.

Focusing back on regional event risk in the Asia Pacific region, Chinese economic data is also following the trend of disappointing US surprises. As such, we may get a softer reading in Chinese Manufacturing PMI on Thursday. This is as Markit Malaysia, Indonesia and Indian Manufacturing PMI cross the wires Friday. All of this will continue testing global economic policy uncertainty, which is still high in the chart below. 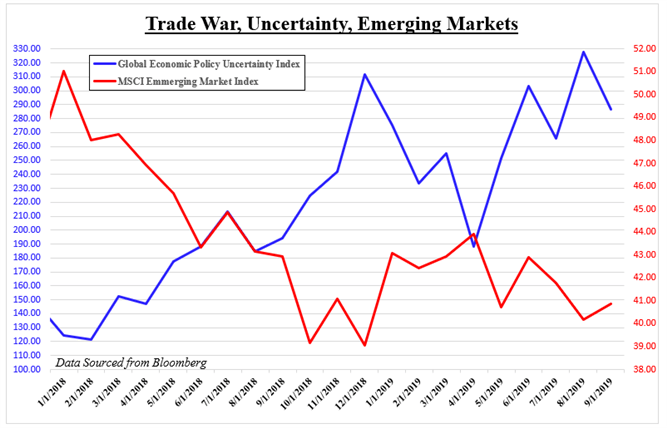