As 2019 continues to unfold, geopolitical tensions in developed economies and between emerging market are escalating. Recently, Brazil-Iran relations took a turn for the worse after officials in Brasilia barred two stranded Iranian tankers from refueling off of the eastern coast of Paranagua. Tehran has responded with threats to cut off imports of key Brazilian commodities like corn, sugar, soybeans and meat.

Total Brazilian exports to Iran amount to approximately $2 billion, which comes to about one third of all Brazil’s cross-border corn sales. Iran’s ambassador to Brazil, Seyed Ali Saghaeyan said – with rather passive aggressive undertones – that unless the issue is resolved, “authorities in Tehran may want to [find other trading partners] because this is a free market and other countries are available”.

But this may not be so. US policy towards Iran has been based off the use of economic pressure to curtail their nuclear program. Washington has banned the importation of Iranian crude oil and targeted petrochemical products, Iran’s second-largest source of income. It is unclear how comfortable the US would feel if an ally continues to do high-volume trade with an adversary and indirectly helps sustain their economy.

As such, firms may feel trepidation in doing business with Iran out of concern that they may incur the wrath of Washington and be threatened with sanctions. If they had to choose between the massive US market or Iran’s, the former seems like the clear preference from a simple risk-reward calculation. In this regard, Iran may have less leverage in trade negotiations with Brazil than their mildly-provocative message suggests.

Furthermore, Brazilian President Jair Bolsonaro would not threaten to undermine his close relationship with US President Donald Trump. Known as the “Trump of the Tropics”, Bolsonaro has sided with his US counterpart on issues such as expanding Chinese influence and said on the campaign trail “The Chinese can buy in Brazil, but they can’t buy Brazil”. Political contagion may become a longer-term risk affecting markets.

However, this kind of rhetoric was to Bolsonaro’s detriment: 42 percent of all Brazilian exports head to Asia, of which 22 percent make its way to China. This is twice the size of total exports heading to the US at 11 percent. However, Brazil has to strategically maneuver between not isolating its allies and not angering a powerful neighbor that has shown no compunction in imposing tariffs or sanctions when it deems appropriate.

Bolsonaro Should be Careful not to Anger Key Trading Partner 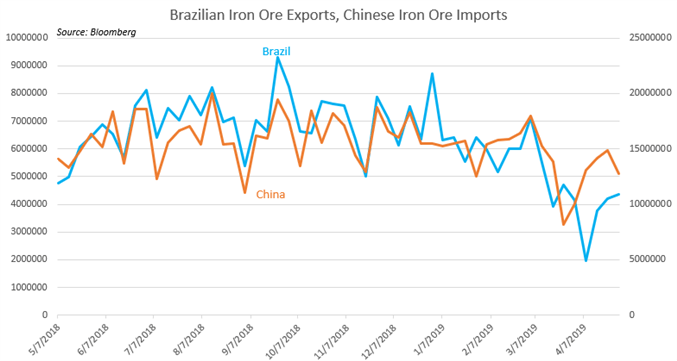 The market reaction to these tensions have so far been limited, though 2019’s track record for political risks suggest the situation could escalate. Brazil’s economy continues to chronically underperform relative to forecasts with capital outflow reflecting diminishing risk appetite and confidence in Bolsonaro’s ability to pass critical structural reforms to kickstart the economy.

This is also reflected in the downward shift in market implied policy rates across various tenors relative to the beginning of the year when market optimism was abundant. Banco do Brasil (BCB) interest rate futures have been tumbling with the Interbank Deposit contract for January 2020 suggesting market participants are expecting a 100bp rate cut as the country’s performance continues to disappoint investors. 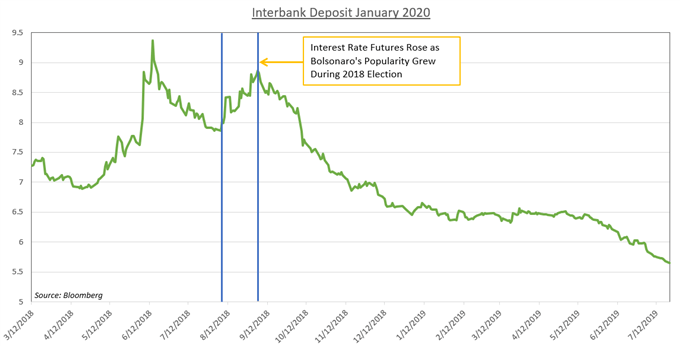 Looking ahead, market participants will be closely watching next week’s FOMC and BCB’s rate decisions. Both central banks are expected to show dovish commentary, with the former widely expected to deliver a rate cut. In light of this, volatility may be relatively muted in USDBRL as traders wait to commit capital or add exposure until major trend-defining event risk has transpired. 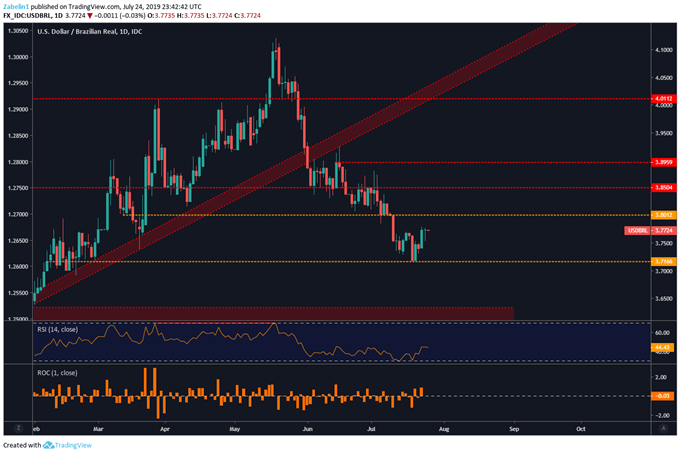