Oil pulls back from a fresh 2019-high ($57.88) even as U.S. Crude Inventories mark the biggest decline since July, but the advance from the 2018-low ($42.36) may start to unravel as the Relative Strength Index (RSI) flops ahead of overbought territory.

Developments coming out of the world’s largest economy may continue to sway crude prices as the U.S. and China, the two largest consumers of oil, appear to be on track to reach a trade deal, and the current environment may keep oil prices afloat as fresh updates from the Energy Information Administration (EIA) indicate a pickup in demand.

U.S. crude inventories unexpectedly narrowed 8647K in the week ending February 22, but a deeper look at the report shows weekly field output increasing for the second consecutive week, with production hitting a fresh record of 12,100K b/d during the same period. In response, the Organization of the Petroleum Exporting Countries (OPEC) and allies may continue to curb production at the next meeting in April, but the mixed rhetoric coming out of Russia indicates that the alliance may come to an end later this year as Energy Minister Alexander Novak argues that its too early to pre-commit to the extraordinary efforts.

As a result, it remains to be seen if OPEC+ will continue to regulate the energy market beyond the six-month agreement especially as President Donald Trump warns ‘oil prices getting too high,’ and the mixed guidance may continue to curb the near-term correction in crude as price threaten the upward trend from late last year, while the Relative Strength Index (RSI) reverses course ahead of overbought territory. Sign up and join DailyFX Currency Analyst David Song LIVE for an opportunity to discuss potential trade setups. 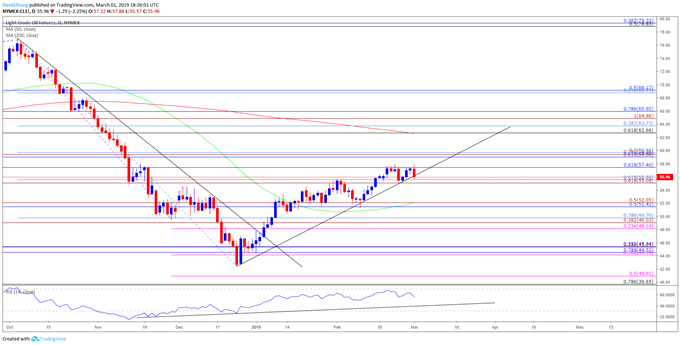 Keep in mind, the broader outlook for crude remains constructive following the break of the December-high ($54.55), with price and the RSI clinging to the bullish formations from late-2018.

At the same time, will keep a close eye on the RSI amid the lack of momentum to push into overbought territory, with the oscillator as risk of flashing a bearish signal if the indicator threatens the upward trend from earlier this year.