Oil pulls back from a fresh weekly-high ($54.68) even as producers in Russia plan to cut production , and the failed attempt to test the monthly-high ($55.75) may generate range-bound conditions as oil prices snap the series of higher highs & lows from earlier this week. 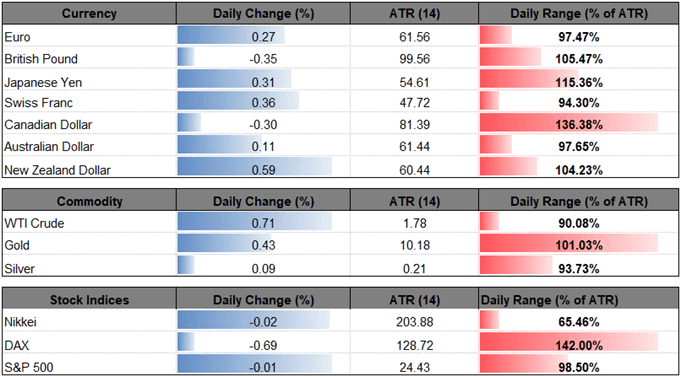 It seems as though the Organization of the Petroleum Exporting Countries (OPEC) and its allies will continue to curb production over the coming months as Lukoil now pledges to cut output by 47K b/d. However, it remains to be seen if the current alliance will carry beyond the six-month agreement as CEO Vagit Alekperov hopes the OPEC+ agreement will have a short-term nature.

The comments suggest the efforts may be unwound after June as Gazprom Neft CEO Alexander Dyukov argues that the global energy market is balanced, but OPEC and its allies may continue to push for higher oil prices as Russia Minister of Energy, Alexander Novak¸ intercedes that the agreement with OPEC is positive for Russian oil companies.

In fact, OPEC may look to extend its efforts beyond the current deadline as the most recent Monthly Oil Market Report (MOMR) shows a further reduction in the oil demand forecast, and the weakening outlook for global growth may encourage OPEC and its allies to keep a lid on production especially as ‘the non-OPEC oil supply growth forecast for 2019 was also revised up by 0.08 mb/d to 2.18 mb/d.’

The slowdown in non-OPEC output may continue to shore up crude especially as the U.S. imposes sanctions against Petróleos de Venezuela, S.A. (PDV S.A.), and the current environment raises the risk for higher oil prices as an inverse head-and-shoulders formation appears to be taking shape, while the Relative Strength Index (RSI) continues to track the upward trend from late-2018. Sign up and join DailyFX Currency Analyst David Song LIVE for an opportunity to discuss potential trade setups. 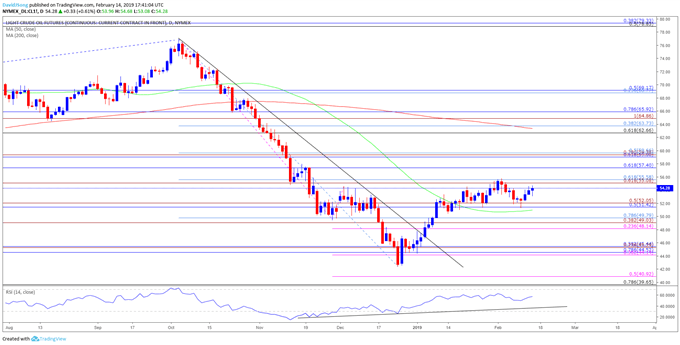