USD/SEK held steady on Wednesday's key central-bank-related events in Sweden and the US. The release of the FOMC meeting minutes sent the US Dollar higher but ultimately ended up unchanged as it trimmed losses from earlier in the day. In Stockholm, Riksbank Deputy Governor Martin Floden spoke at a press conference on the central bank’s monetary policy and the Swedish economy.

As expected, his tone was less hawkish than Governor Stefan Ingves’ disposition at the most recent policy meeting. However, what both officials had in common was their increasing concern for risks coming from abroad. These include Brexit, US-China trade relations and European growth – or there lack of. ‘Hiking path depends on what’s going on abroad’ Invges said.

The growing political and economic uncertainty in European affairs is catching the eye of Riksbank officials because of the unique nature of EU-Nordic relations. Slower growth in the largest Eurozone economies – Germany, France and Italy – has been weighing on European assets as the latter struggles with a recession with the other two not far behind.

Floden appears to have taken these risks into consideration when he stated that the central bank has ‘lots of time and doesn’t need to stress new hikes’ because of the ‘many uncertainties ahead’. The last two policy meetings have indicated that the central bank intends on raising rates at least once in the latter half of 2019. However, increasing domestic risks along with international uncertainties may derail that plan.

Later this month, Deputy Governor Per Jansson – who was absent at the most recent policy meeting – will be publishing his own report and view on the most recent policy meetings. He, like Floden, favor a more gradualist approach and have both attributed a large degree of the inflationary rise to energy. Removing that volatile factor gives a clearer picture of underlying growth in the economy.

USD/SEK recently breached a landmark resistance at 9.4066, the highest point since December 2016. The fundamental outlook for the global and Swedish economy suggests the pair will likely continue to climb higher. However, there might be some pullback in the short-term as the pair may start transitioning from a sugar high to a sugar crash as negative RSI divergence reveals fading upside momentum. 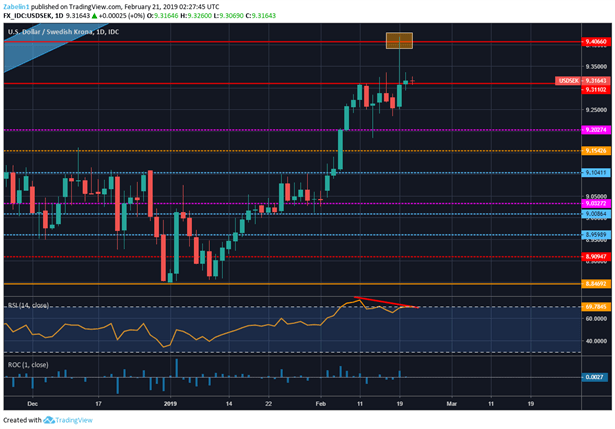 Looking ahead, Swedish GDP will be released on February 28 following the release of the IMF’s publication on the Swedish economy. Key economic data out of Europe such as German GDP – a concern cited by Floden – might also be market moving. Keeping an eye on fundamental factors as the political economy of world affairs shifts will be essential to maintaining a well-informed strategy.

Floden also said that the global economy is now in a calmer phase. It is prudent to remember that violent storms are often preceded by a moment of tranquility.