- The Italian budget deficit negotiations may be front and center, but civil unrest in Europe’s second largest economy is weighing on French bond markets, hurting the Euro.

- While Italian-German bond yield spreads have narrowed since mid-November and have stayed unchanged in December, French-German spreads have widened out, suggesting new political risk has been introduced to the Euro.

- Implicitly, the budgetary changes proposed by French President Emmanuel Macron will see the French budget deficit/GDP ratio go above 3%, a move only stands to complicate the European Commission’s budget negotiations with Italy.

Political risk has been emanating out of Europe for some time now. The derailment of the Brexit negotiations at the start of this week coupled with ongoing tension over the Italian budget have kept European politics front and center since at least the end of September. But as the latter of these two influences appeared to be coming to a head – both European Commission policymakers and Italian politicians seemed willing to find a middle ground – a new risk has been introduced, from France: the threat of a Emmanuel Macron’s presidency failing.

The “gilet jaunes” or “yellow vest” protests have engulfed Paris, among other major cities, in riots for the past several weekends. Given that the cause was fiscal in nature – protestors were unhappy with a tax hike – markets have been keen to see how French President Macron would react. In response, a desperate President Macro promised to raise wages and step up government spending. There are two risks that have developed as a result of President Macron’s quick cave to the protestors’ demands.

First, there is no reason for the protestors to stop rioting until they get everything they want; Macron caved quickly once, so he probably will again. Accordingly, it is now a risk that the Macron government fails; a no-confidence vote is possible if the riots don’t dissipate. As the riots have persisted, the French-German 10-year bond yield spread has increased; meanwhile, their Italian-German counterpart has narrowed since mid-November and have stayed unchanged in December. If there is political risk hurting the Euro, it’s coming from France at the moment. 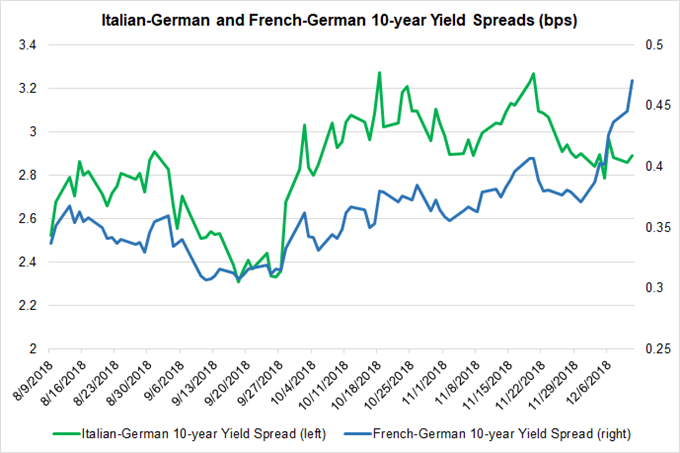 Second, by promising to reverse his tax hike, increase wages, and boost government spending in general, President Macron has promised to deliver a budget deficit, as a percentage of GDP, likely around 3.5%, according to French Budget Minister Gerald Darmanin. Why does this development matter? The European Commission’s threshold for budget deficit is 3.0% of GDP.

France and Italy: Playing by the Same Rules?

To let France sustain such a budget would appear to hypocritical to the casual observer, particularly as the European Commission currently chastises Italy for attempting to run a budget deficit-to-GDP ratio of 2.4%. The optics of the matter have been picked up by Italian politicians swiftly.

Speaking at a press conference in Rome, Italian Deputy Prime Minister Luigi Di Maio said that the government would not give up on its election pledges, even as it has no interest in facing an excessive deficit procedure (EDP) that could see Italy fined 0.5% of GDP, roughly €9 billion. Noting that the negotiations between the EC and Italian government were reaching a critical juncture, Italian Deputy PM Di Maio said he would be monitoring the EC’s response to France, to see “if we have to play by the same rules.”

This new French wrinkle to the Italian budget deficit negotiations has significant consequences. If France is allowed to skirt EC budget guidelines, why not Italy? To this end, if France isn’t being held to the budget restraints that Italy is, why would Italy play by those rules at all? Somewhat alarmingly, the short-term political concession made by French President Emmanuel Macron could have long-term reverberations for Euro stability. 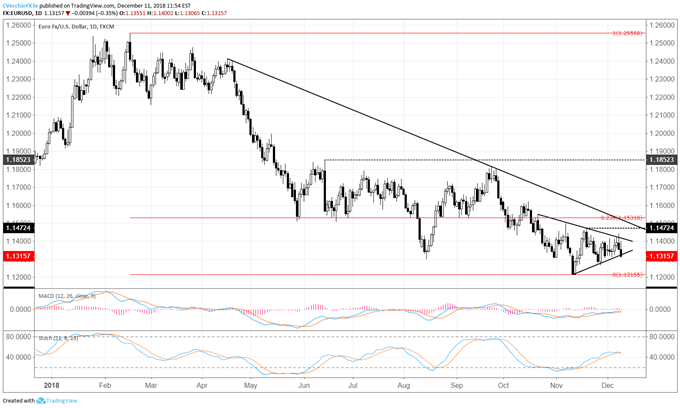 EUR/USD has been trading sideways for several weeks now, and the series of lower highs and higher lows has coalesced into a symmetrical triangle. While such a development in the context of preceding losses would usually point to a resolution to the downside, recent price action has revealed the prospect of an inverse head & shoulders pattern emerging at the 2018 lows. However, following the bearish outside engulfing bar established yesterday, attention has turned back to the downside for EUR/USD.

Price has now turned down through its daily 8-, 13-, and 21-EMA envelope, undercutting the prior building bullish momentum. Both daily MACD and Slow Stochastics have turned lower, both on the verge of sinking into bearish territory. A move below the November 28 low of 1.1267 would signal that the next leg of Euro weakness is beginning, with the yearly low of 1.1216 immediately in focus.

Read more: Dollar Bulls Not Out Yet amid DXY Index Bullish Outside Engulfing Bar