When it comes to the US stock market and economic data, President Trump and his administration have taken an outspoken approach to discussing America’s state of affairs. While traders should always keep an eye and ear out for any official White House comment on ‘hot button’ topics, it is vital to identify statements that carry weight and change investor psyche which results in market price movements.

Distinguishing remarks that make an impact from those that are less material begins with identifying source and context. Comments from heavy hitters that generally have a strong influence over moving the market’s needle are generally concentrated amongst President Trump, Treasury Secretary Mnuchin, Commerce Secretary Ross, National Economic Council Director Kudlow and Federal Reserve Chairman Powell. Irrespective of titles, interpreting what, how and when something was said is paramount as jawboning remarks from these politicians can sometimes strong-arm markets into reading a rosier story than what economic reality depicts. Generally, this is done to paint a more optimistic view or push a particular narrative.

By looking at comments made in the past by these high-ranking government officials and studying the market’s subsequent reaction, investors can gain a deeper understanding of how their future statements might impact the market. One recurring theme worth investigating is the track record of the White House speaking up when in need of a confidence boost which can be seen several times throughout the year. 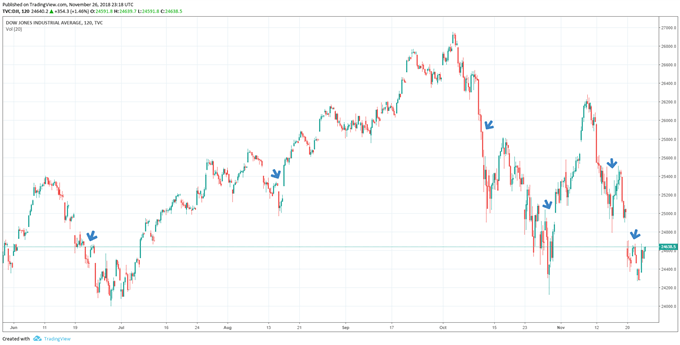 Anyone who thinks the economy is being wrecked doesn’t know what they’re talking about.” – Ross, June 21

As investors grew restless over tension with our two largest trading partners, Canada and Mexico, markets slipped over three percent as fears of not reaching a new NAFTA deal escalated. Commerce Secretary Wilbur Ross is heard here staving off criticism from economists voicing valid concerns about President Trump’s protectionist policies and consequential impact on economic growth. After reassuring markets, the Dow is seen recovering lost ground over the subsequent ten trading days and rallies throughout July.

“By far the single biggest event, be it political or otherwise, this year is an economic boom that most people thought would be impossible to generate. Not a rise, not a blip [but] a genuine economic boom.” – Kudlow, August 16

Director of the Economic Council Larry Kudlow puffs his chest touting U.S. strength as an economic powerhouse following the implementation of tariffs on Chinese imports. As the sugar high from Trump tax cuts faded and the threat of a trade war from Chinese retaliation escalated, however, investors grew pessimistic about future prospects. As his enthusiastic words calmed the market’s nerves and inspired risk-on sentiment, stocks proceeded to notch several all time highs and a record long bull market run.

Following early October’s widespread selloff that hit nearly all global asset classes, Secretary of the Treasury Steven Mnuchin points out that market participants often overreact and are inefficient at finding equilibrium prices for securities. With political unrest across the European Union, threats of a deepening trade war and a staggering downward revision to the International Monetary Fund’s global growth forecast, investors did have reason to change their sentiment on risk taking. However, Mnuchin’s claim that the market’s knee-jerk reaction was exaggerated bolstered buying and consequently turned the decline into an attractive entry point as markets stabilized.

“The Stock Market is up massively since the [Presidential] Election, but is now taking a little pause – people want to see what happens with the Midterms. If you want your Stocks to go down, I strongly suggest voting Democrat.” – Trump, October 30

In anticipation of the November Midterm election, President Donald Trump intensifies his attack on Democrats claiming that stocks will drop if Republicans lose control of either congressional house. This follows the month-long decline in US equities as investors began pricing in the event risk from a potential shift in congressional power. His threat to keep political control and continue pushing an uncontested agenda showed effective at pre-election polls. Investors who have a favorable view of Trump’s pro-growth agenda seemed to notice as an uptick in pre-election polls for republicans was met by gains in the broader market.

“We have to be thinking about how much further to raise rates and the pace at which we will raise rates.” – Powell, November 14

Jerome Powell, Chairman of the Federal Reserve, states in a press conference that America’s central bank has the path to normalize monetary policy on its foresights. After several months of reassuring markets of a “slow and steady” approach to raising the benchmark interest rate, the chairman’s words revealed a noticeable shift in fedspeak to a more dovish tone. As recent volatility rattled investors around the world due to emerging market woes, democrats winning control of the house of representatives in the US and trade talks seemingly worsening, softer language from the most influential central bank changed perceptions about the implied trajectory of interest rate hikes. Markets initially reacted positively to the prospect of slower interest rate increases as cheaper discount rates make the future cash flows from investments more lucrative.

“My personal view, our administration's view, the recession is so far in the distance you can't see it” – Kudlow, November 20

With appetite for risk vanishing as top investment banks urge clients to raise cash balances amid market turbulence as angst of an impending economic slowdown wipes out all year to date gains for US stocks. Larry Kudlow, Director of the National Economic Council, aims to calm investor nerves as uncertainty revolving the economy’s current and future health quickly mounts. So far, markets have not been buying the bode of confidence from the White House.

Having the awareness of when White House officials are scheduled to speak, their topic of discussion and the historical context of the subject matter all support a more effective strategy for gauging the market. Dissecting their assertations allows traders to gain deeper insight on a message’s true meaning which enables the exploitation of possible trading opportunities. It is important to point out, however, that while persuasive remarks from President Trump and his esteemed appointees can bolster confidence and solicit risk taking in the short term, market fundamentals broadly overpower the influences of bureaucratic rhetoric in the long run.

Check out our economic calendar for important upcoming events like the release of the Fed's minutes.