After Monday’s climb, US equities closed marginally lower for 2018, a stark difference from the lofty heights seen in September. After a brutal October and a rough November, the index erased all gains in the year-to-date and briefly fell into the red but stellar performances from Amazon and General Motors dragged US equities close to the black once again on Cyber Monday. 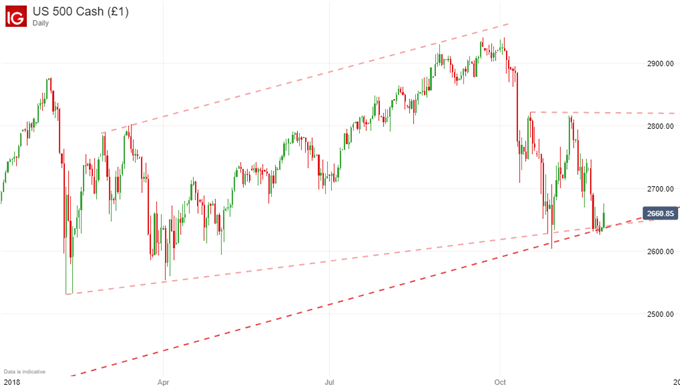 Tis’ the Season for Shopping – What About Investing?

With the holiday shopping season officially underway following Black Friday last week and the conclusion of Cyber Monday today, customers across the US scramble to open their wallets and spend big. After another year of record-smashing retail sales on the biggest shopping blitz of the year, investors and traders alike catch their breath with a rise in global equities after a recent selloff. High hopes for consumer spending casts a positive light on the market’s outlook for the remainder of 2018, but does the excitement justify another “Santa-Claus rally?”

Judging by the chart below, the S&P500 typically outperforms relative to the first 10 months of the year when retail sales during the holiday months of November and December exceed retail sales from non-holiday months. Outlook for the market over the next 2 months may strike a node of confidence that the return for the S&P500 was negative only 3 out of the last 14 years during holiday months – 2 of which were observed in the midst of the financial crisis. This Cyber Monday is poised to deliver another strong performance according to early estimates. 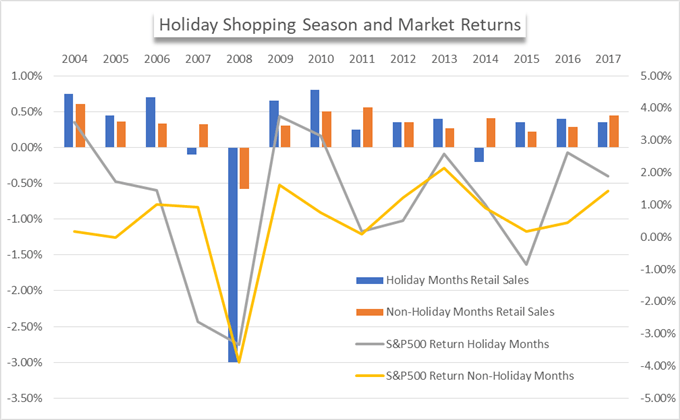 According to Adobe Analytics, Black Friday pulled in a record $6.22 billion in online sales and Cyber Monday is expected to set a new record of $7.8 billion. A $7.8 billion print would equate to an 18% increase from last year. A strong economy, record low unemployment, wage growth and high consumer confidence are all contributors to the formidable retail sales. Join analyst Peter Hanks for his live coverage of November’s consumer confidence data due Tuesday. Although strong retail holiday sales may shine bright, the broader performance of the market can be overshadowed by what’s going on in other segments.

Unfortunately for equity bulls and holiday rally believers, trade wars may temper any sustained climb. In an interview with the Wall Street Journal, President Trump commented on the US-China trade war just days before he and Chinese President Xi Jinping are due to meet in Buenos Aires at the G20 Summit. “If the US cannot reach a trade deal with China, we will go ahead with the additional $267 billion in tariffs on Chinese goods.” He continued, “We intend to move forward with increasing tariffs on $200 billion of Chinese goods from 10% to 25%” and went on to say it was “highly unlikely” that he would accept Beijing’s request to hold off on the increase.

Apple and General Motors Caught in the Crossfire

Along with comments toward China directly, the President also highlighted domestic companies that could be affected as he took aim at Apple. Referring to a possible tariff on iPhones, the President said “I mean, I can make it 10%, and people could stand that very easily.” The remark did little for Apple’s shares which were -1.55% lower in after-hours trading.

View our fourth quarter equity forecast to see what equity markets may face as the year draws to a close.

General Motors also fell under fire after the car manufacturer announced plans on Monday to close seven plants and fire up to 14,000 salaried workers by the end of 2019. The announcement sent shares of GM higher in intraday trading but drew criticism from President Trump and others. After an interview with GM CEO Mary Barra, President Trump said he is “not happy” with GM’s plan and suggested the company stop making cars in China and open a new plant in Ohio.

Coupled with the downward pressure on Apple and the ire toward GM, equities may struggle to keep their footing at Tuesday’s open. The week will see further trade comments up to and during the G20 Summit in Buenos Aires where foreign officials will meet to discuss trade and other concerns. The event has been heralded as the first opportunity for the US and China to make progress toward a trade war resolution.