Fourth-quarter technical and fundamental forecasts from the DailyFX analysts are out now !

China’s currency has fallen sharply and consistently against the US Dollar this year, reaching lows not seen for a decade last month. Indeed the greenback is once again flirting with the psychologically crucial CNY7.00 level, raising much market speculation as to whether Beijing would allow its currency to weaken beyond that point. 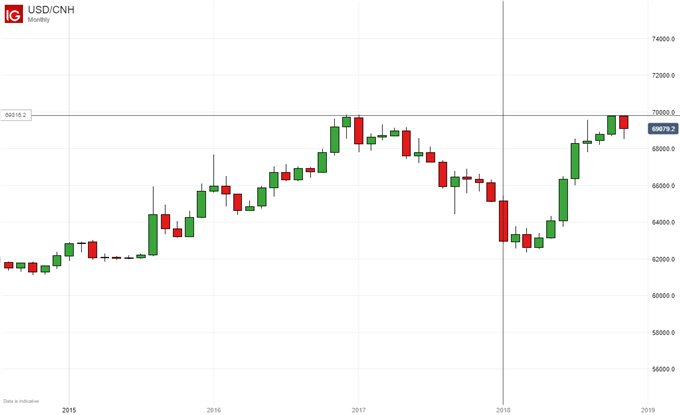 So why exactly is the currency so feeble, and what might a prolonged period on the ropes mean for foreign exchange markets more broadly?

Well, in examining the Yuan’s long fall against the Dollar it is important to note that this could very well be as much a tale of the latter’s strength as the former’s weakness. Buoyed up on the tide of rising US interest rates, plenty of currencies are well down for the year against the US unit. Emerging markets have been especially hard hit. For all its power, China remains just such a market. It would be odd to see the Yuan standing too far out of line with the others here.

After all, the US economy continues to power ahead, even as China’s appears to be decelerating.

A Different Sort Of Devaluation

In short, a weaker Yuan looks eminently justifiable in economic terms. This is certainly not a rerun of 2015. Back then, a shock, clumsy Yuan devaluation triggered by the Chinese central bank smashed stock markets around the world. This year’s much more muted market reaction seems to reflect that difference.

Of course, the White House has weighed in but it has also so far declined to label China a “currency manipulator” – a status bringing mandated punishment. Donald Trump has said this year that the Yuan’s fall has put the US “at a disadvantage”, but his rhetoric since has been more measured. Well, a bit more.

The US administration is still hopeful for headway in the acrimonious trade spat between it and Beijing, which has involved tit-for-tat tariffs and threats of more. Maybe these hopes are preventing too much rhetoric against Chinese currency moves that are in any case explicable by broader market forces.

A Weaker Yuan Is Not Risk Free

Yes, a weaker currency might cushion China against some US tariffs, and make its goods cheaper in other markets. However, it will not offset them all. Moreover, Beijing has a strong interest in not allowing the Yuan to become too weak for too long. It has trouble enough with its own economy without having to expend potential billions on combating the capital flight that a prolonged currency battering might bring.

Still, even if the Yuan stays around current levels there will be knock-on effects. Chinese purchases of luxury goods are likely to slow. The streams of Chinese tourists now watering many countries’ holiday industries could also run a little dryer. China’s export partners will also feel the pinch, with the Australian and New Zealand Dollars probably in a little unwelcome focus here.

Both have been hammered this year by yawning interest-rate differentials in the US Dollar’s favor, and by stubbornly low domestic inflation. They do not need another economic negative but might well get one in a weaker Yuan.

There is also the Chinese currency’s status as emerging-market bellwether. The Yuan can cast an unmissable cloud over that entire asset class at these levels.

Still, while the US Dollar continues to carry the day – for as long as the Fed is out in front in the monetary tightening stakes – then the Chinese currency is most unlikely to rise very far. They key test for currency investors will be how much weaker it gets from here.

Whether you’re new to trading or an old hand DailyFX has plenty of resources to help you. There’s our trading sentiment indicator which shows you live how IG clients are positioned right now. We also hold educational and analytical webinars and offer trading guides, with one specifically aimed at those new to foreign exchange markets. Be sure to make the most of them all. They were written by our seasoned trading experts and they’re all free.