We run a weekly UK Key Events and Market Webinar every Monday at 11:30 BST where we discuss the latest Brexit news and events.

On June 23, 2016 the UK held a referendum on its membership of the EU, asking the electorate if they wanted to remain a member of the EU or not. The result of the referendum showed voters chose to leave by a majority of 51.9% to 48.1% or 17.4 million votes against 16.1 million votes. The incumbent Prime Minister David Cameron resigned shortly after the result and Theresa May replaced him on July 13.

UK PM Theresa May triggered Article 50 of the Lisbon Treaty on March 29, 2017, officially starting the process of the UK leaving the EU. The UK is scheduled to leave the EU on Friday, March 29, 2019. Both sides have also agreed to a 20-month transition period – between March 29, 2019 and December 2020 – to allow businesses to prepare for new post-Brexit rules and relationships. No other nation state has ever left the European Union.

On January 17, 2017 PM May set out 12 principles for the United Kingdom’s exit from, and new partnership with, the European Union - The White Paper. These principles include taking control of law, controlling immigration, securing UK and EU nationals’ rights, ensuring free trade with the EU and securing new trade agreements with other countries.

The EU have consistently stated that their four key principles be met if the UK wants to keep access to the single market. These four principles are free movement of goods, capital, services and labor, principles which put the two sides at loggerheads. The EU is currently unwilling to move on their principles – and give the UK a special status or deal – in case other countries apply for improved status within the single block.

On the other side of the table, the UK believe that there should be maximum flexibility from the EU and that the UK’s future trade agreement should be unique, reflecting the size of the UK economy, the amount of trade between the two blocks and the fact that the EU runs a substantial trade surplus with the UK.

If neither side move on these principles, the UK will leave the EU in March 2019 without a trade agreement and will have to revert to World Trade Organisation (WTO) rules – a ‘Hard Brexit’. Under WTO rules the UK would have to negotiate bilateral trade deals with 53 countries with which the EU currently has free trade agreements (FTAs) before it leaves the single market.

UK financial markets continue to react to the ebb and flow of Brexit news and volatility is expected to increase as March 29, 2019 – Brexit day – heaves into view.

On Friday June 24, 2016, GBPUSD fell 12% on a high-to-low basis as traders struggled to put a value on the British Pound. The pair hit a three-decade low while the percentage price movement was the largest in the history of the pair. In comparison, on October 24, 2008, when the UK was on the cusp of going into recession, GBPUSD traded in a 9.5% range on the day, as investors threw in the towel and abandoned Sterling. Other notable heavy falls include ‘Black Wednesday’ when the UK left the ERM in September 1992, GBP fell around 8% against the Deutsche Mark, while in 2014 when Scotland voted on whether to become an independent country, sterling fell by around 4% against the US dollar.

A no-deal or hard-Brexit would likely see Sterling fall further and re-test the post-referendum lows until investors thought that the risk/reward of buying and holding Sterling fell heavily in their favor.

Conversely a soft-Brexit or a mutually compatible trade deal between the EU and the UK would send the British Pound sharply higher with the recent double-highs around GBPUSD 1.4300 a near-term target. 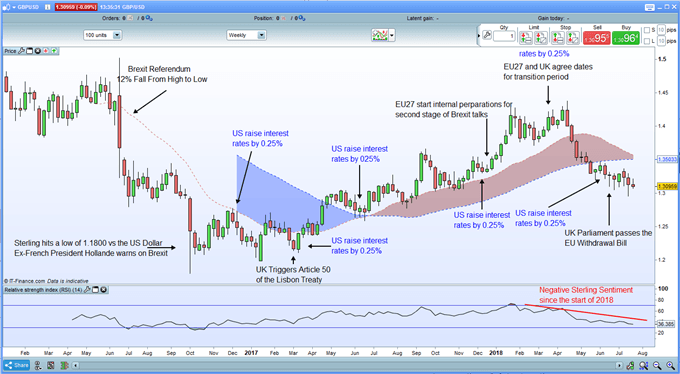 In contrast the FTSE 100 – an index made up of the top 100 UK companies by market capitalization – has risen steadily since October 2016, setting new highs along the way. The FTSE 100 is primarily made up of exporting companies who benefit when sterling weakens, especially against the US dollar, boosting the value of the company. This inverse correlation may come under pressure when a deal/no deal is announced. A wave of optimism for a soft-deal or mutually agreement trade agreement would likely send both asset classes higher while a no-deal Brexit may weigh heavily on both asset classes. 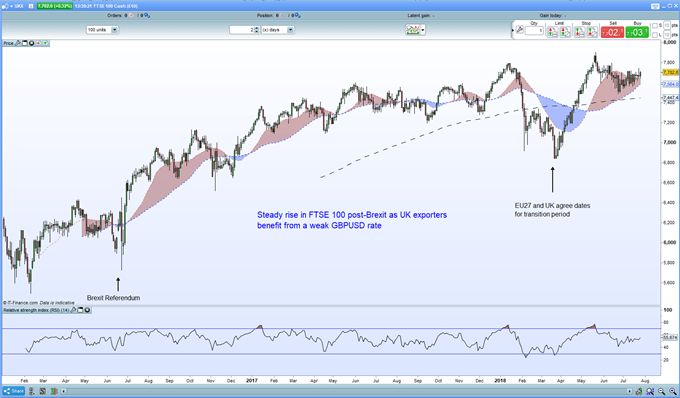 If we look at EURGBP we can see that after the post-referendum initial volatility, the pair have settled in a trading range as talks progress. A hard Brexit or no-deal will negatively affect both economies, a lose-lose outcome, and both sides underneath all the rhetoric are actively working to stop this from happening. The worry is that either side may have become so entrenched in their position already that a soft Brexit becomes impossible and the UK leaves the EU without any trade agreement. 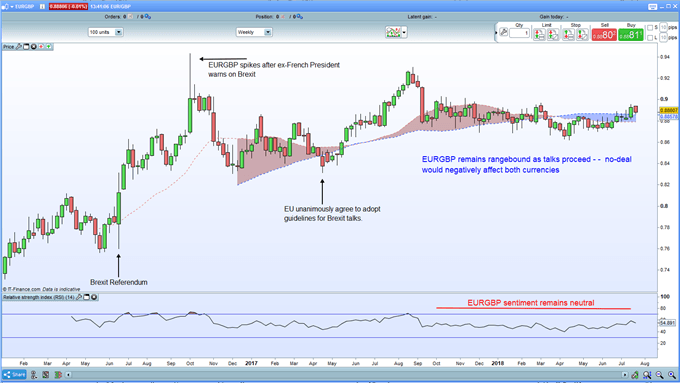 The impact on the UK economy as we stand has been marginal since the June 2016 vote with growth subdued, inflation above the central bank’s target, while UK unemployment is currently at its lowest level in four decades. However, as we move towards March 2019 with no deal in sight, companies will increase their readiness for a ‘Hard Brexit’, moving production abroad and reducing their UK workforce. In addition, the UK’s dominant, and highly-prized, service sector will take a marked hit, not only lowering UK growth but also negatively impacting the countries’ tax revenue.

The EU will also suffer if no deal has been agreed. In 2017, the UK imported £341 billion of goods from the EU while exporting £274 billion the other way – a trade deficit of £67 billion with the EU made up of a £28 billion surplus on trade in services and a £95 billion deficit on trade in goods.

October 18-19, 2018 – European Council Meeting. Both the EU and UK hope to agree the shape of their future trading relationship.

Before and in-between these meetings a secondary narrative is playing out within the UK government. Members of Parliament (MPs) in the ruling Conservative Party are fairly evenly split between strident ‘leavers’ and ‘remainers’ making it very difficult for the government to find consensus on any Brexit negotiation or bill.

As we stand there has been very little headway made between the two sides as the UK nears the exit. The EU continues to stand firm on their four pillars, repeatedly telling the UK that they will not move, while the UK’s bargaining stance has been weakened by internal politicking within the ruling Conservative Party. Some progress has been made on the rights of UK and EU citizens and potential trade – but not services – while the thorny issue of a hard border in Ireland and the role of the European Court of Justice post-Brexit continue to weigh on negotiations.

We have just release our Q3 Trading Forecasts for a wide range of Currencies and Commodities, including GBP, USD and EUR.