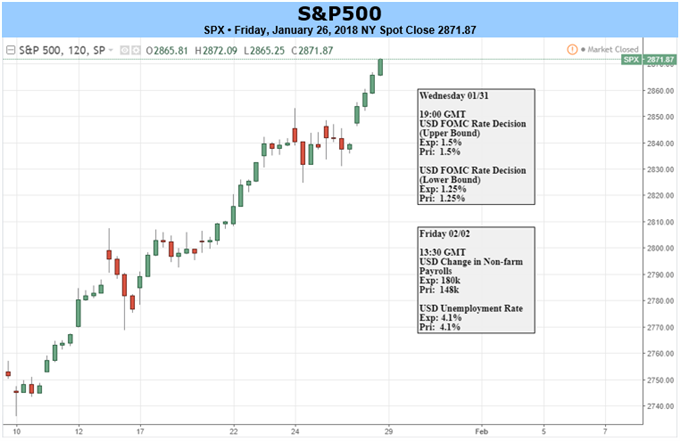 Looking ahead to next week there are two main events. The FOMC on Wednesday, then the January jobs report on Friday. The Fed isn’t expected, though, at this time to raise rates. Friday, the market will look for an uptick in the number of jobs added during the first month of the year. Expectations are for +165k, up from +148k in December. There are several other high-impact data events on the calendar; Core PCE on Monday, CPI on Tuesday, and ISM Manufacturing/Employment on Thursday. For a list of all data releases, see the economic calendar.

The S&P 500 showed some instability last week, with bigger-than-usual ranges, and a couple of strong intra-day sell-offs (at least by current standards). The market appears to be in ‘blow-off’ mode, and there is evidence by the price action that we could be nearing at least a pullback. However, shorting without further signs appears risky, while buying doesn’t hold much appeal at this juncture from a risk/reward standpoint. 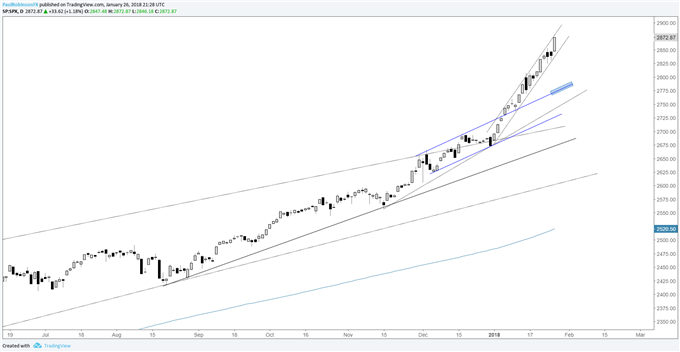 Last week, the DAX sold off on euro strength on the back of Thursday’s ECB meeting and a generally weak US dollar. Looking ahead to next week, Euro-zone and German GDP are on Tuesday, German Employment data and Eurozone CPI on Wednesday. Also, look out for a possible reaction on Thursday following the FOMC announcement the day prior and the U.S. jobs report on Friday.

The DAX started out last week in ‘breakout’ mode, but was quickly met with selling. The surging euro and generally wobbly risk sentiment sent the index back well below the breakout level of 13525. The trend remains pointed higher, but will soon need to reassert itself it if is to continue trading higher, or else another round of selling could set in. A break below 13222 will have the 13137 level in focus, a break below there would snap the sequence of higher highs and higher lows and likely usher in more selling. On the top-side, 13525 will need to be overcome, then the high at 13597. But even a move back above the high will bring the 2015 trend-line back into focus, which again could prove problematic. Outlook is somewhat murky at the moment. 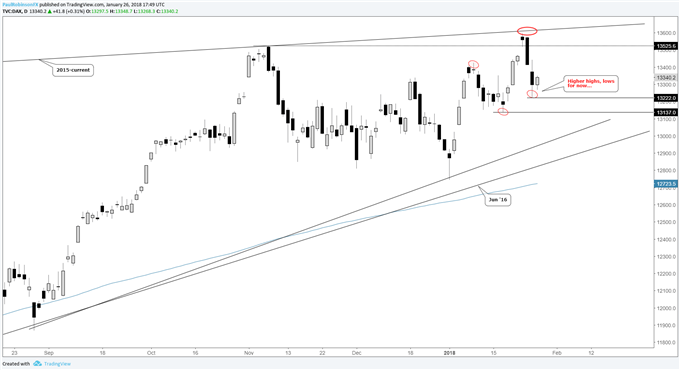 Looking ahead to next week, the calendar is light in the U.K., with no ‘high’ impact data set to be released. For a run-down of all scheduled events, see the economic calendar.

The FTSE, while a pullback was needed, took a surprising spill last week. The plunge brings the top of H2 2017 range back into focus in the 7550/600 vicinity. It will be crucial for the footsie to hold this major level of support; if it breaks then look for selling to accelerate. On the top-side, the first levels up as resistance clock in at 7683 followed by 7445. 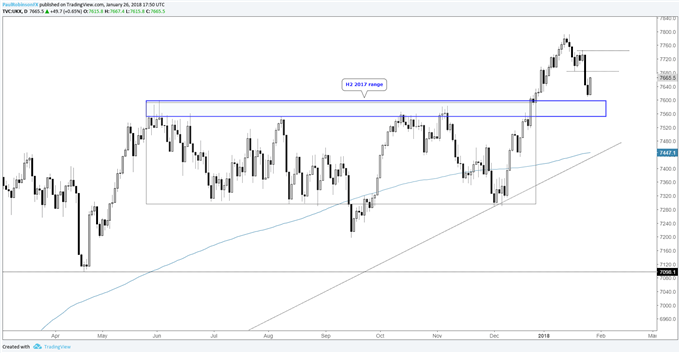