Volatility Accident? SNB Flashback? What Else Before 2018?

Have a question about how any of these might unfold? Join a Q&A webinar and ask it live!

From a volatility accident to SNB flashbacks, these are some of the unexpected pitfalls that may strike the financial markets before year-end.

Historically, December is a consistently quiet month for the financial markets due to the abundance of market holidays and the need among funds to balance the books. However, I see a significantly higher chance this year that a volatility ‘accident’ could befall the markets between under-appreciated risks and over-extended investors. There is a record amount of leverage – both notional and thematic – being employed across the markets which makes market participants exceptional at-risk in already thinned market conditions. Consider how much return would be made by riding out a ‘long-risk’ position through the untended close to the year against the exceptional risks we face if something goes wrong. 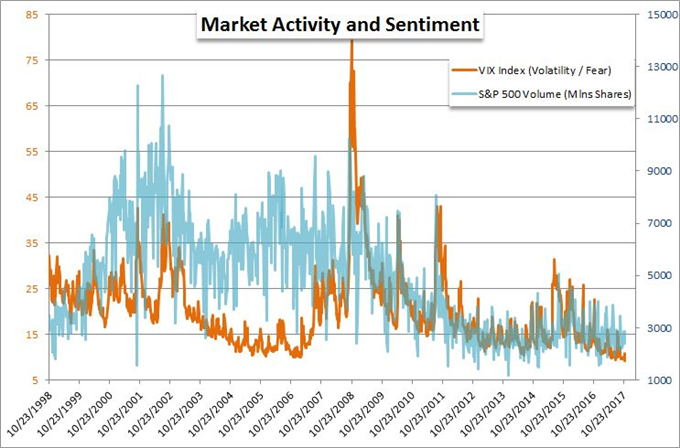 The Swiss National Bank has a penchant for shocking markets with abrupt changes in the stance of monetary policy. Swiss inflation has trended higher for nearly two years and the key EUR/CHF exchange rate is at highs unseen since before the epic collapse in January 2015. Meanwhile, the ECB has dialed back the pace of its QE effort while most political threats seen at the start of 2017 have not materialized. If Germany muddles through coalition talks despite recent setbacks and Angela Merkel looks stable at the helm, the SNB may feel secure enough to pull back on some elements of its stimulus framework, perhaps without pre-announcing it. That might produce another sharp surge in Swiss Franc volatility. 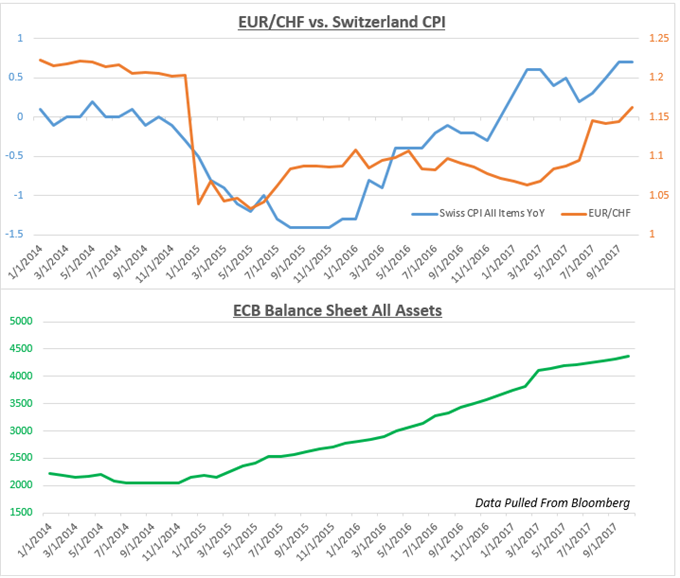 BOJ Stimulus Exit: Are We There Yet? – David Cottle, Analyst

Bank of Japan sources have been dropping hints to various news agencies (most notably Reuters) that the extraordinary monetary stimulus provided by the Bank could be withdrawn sooner than markets expect. It's possible that BoJ Governor Haruhiko Kuroda might allude more explicitly to this possibility before this year's end. Be careful though. He will not be able to go too far, or to be too clear. Any change of policy cannot be announced too far in advance and the BoJ is clearly not yet ready to move. But look out for the omission of "powerful monetary easing," so long a fixture in his commentary, and perhaps some broad sketching of what a stimulus-exit plan would look like. These will be Yen supportive, if they come. 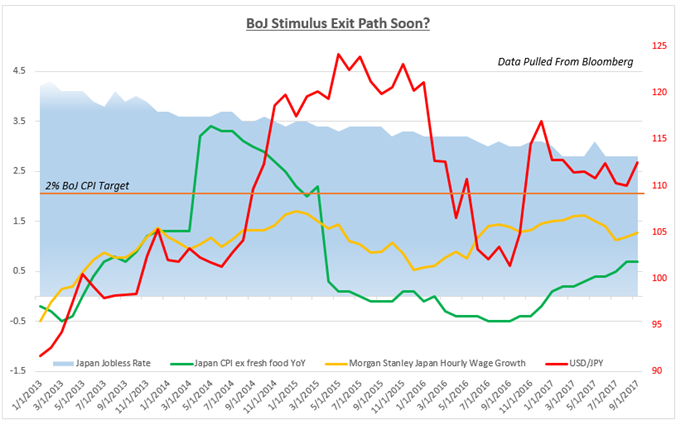 Low inflation may be good for bonds and stocks, but it’s done no service for the US Dollar in 2017, particularly as the expectation of a GOP-led legislative overhaul proved obtusely optimistic.But while attention has been on fiscal matters, few recently have been giving notice to the fact that inflation has been persistently low and disinflation is starting to appear in the data again. Given that the Federal Reserve has held its intention to raise rates three times in 2018 since the December 2016 Summary of Economic Projections, further signs of disinflation may give the Fed pause on its projected glide path for rate hikes next year. If so, the US Dollar is in trouble through the end of 2017 into early 2018, regardless of whatever tax plan Congressional Republicans and President Trump can muster together. 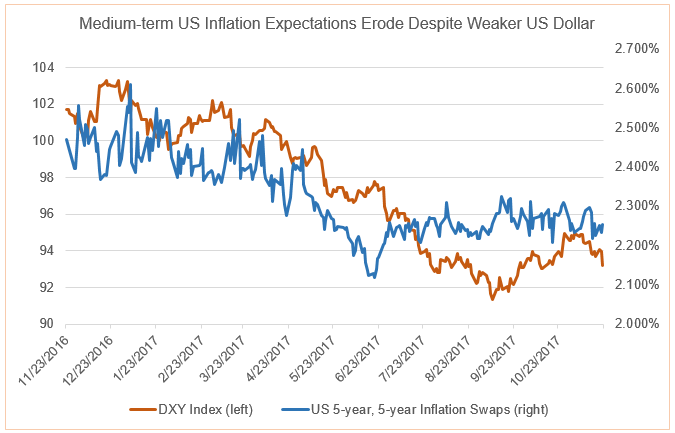 I think that UK inflation is going to surprise in December, perhaps even printing as high as 3.2% annualized; and I think that could start putting some additional pressure on the BoE to look at another rate hike in the first half of next year. February is likely too early, but May could be an opportune time for the BoE to start talking about nudging rates again. I do not think that the single hike in November is going to be enough to get inflation back-below 2.8%, and as British consumers remain incredibly resilient, I think that domestic price pressures are going to begin showing a bit more prominently. 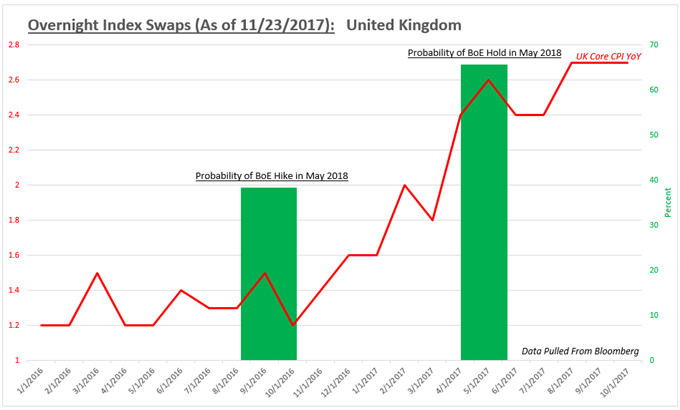 Recently, many have questioned if growing Yen strength is possibly signaling a risk-aversion event just ahead, but the two – USD/JPY & S&P 500 – at least for the next few weeks, could diverge hard and leave the ‘convergence, risk-off’ crowd still scratching their heads. U.S. equity markets are poised to end the year at or near record highs, with strong seasonality tailwinds. While the Japanese Yen has potential to rally with a vengeance in the final weeks ahead, squeezing large speculators who are short a nearly unprecedented amount of futures contracts. USD/JPY is already beginning to roll down hill (while stocks rally), and a drop of 5-7% from current prices may be in the works before the year ends. It would require a lot of technical damage in the process, but if there is a currency which can build momentum in a hurry, it’s the Yen.