DAX Seeking Breakout, FTSE 100 Stuck in Range Ahead of BoE 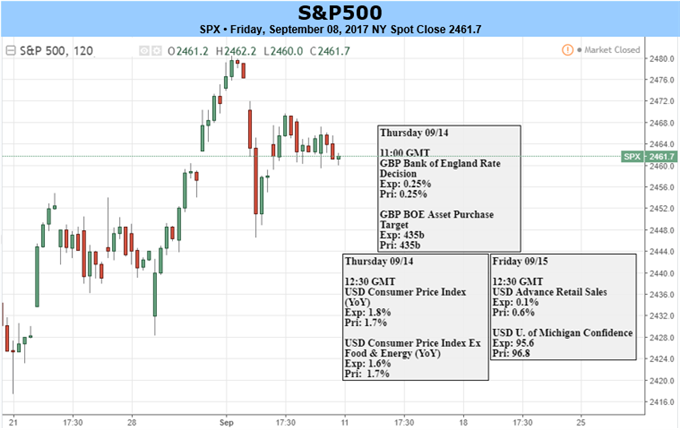 Looking ahead to next week, the economic calendar holds a couple of ‘high’ impact data releases by way of the Consumer Price Index (CPI) on Thursday, followed by Advance Retail Sales and UofM Confidence on Friday. For release details, please see the economic calendar. Headlines regarding North Korea will be a threat to market stability, but have recently had a diminishing impact on risk appetite.

It remains a seasonably weak time of the year for equities through the first half of October, which is a headwind the market faces. But right now, ‘weakness’ has yet to prove to be anything more than small swoons with buyers quickly stepping in. There is still a small possibility we see a ‘head-and-shoulders’ top come to fruition, but until we see the market pick up steam to the downside and solidify the ‘right shoulder’ it’s only a passing scenario at this time. Appetite for risk remains stable and with that a move towards new record highs still has good odds. The 9/1 high at 2480 is the only significant hurdle needed to overcome before the old high is challenged. Looking lower, should we see a breach of 2446 then we may see a move towards what could become the neckline of the aforementioned H&S pattern (we’ll delve further into this scenario should it become relevant.) 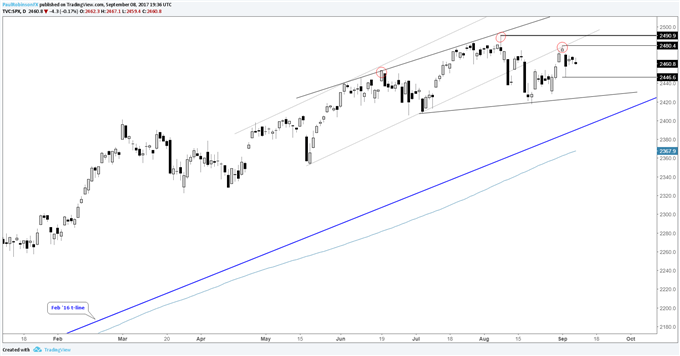 Despite seeing the euro make a strong move higher on the ECB last week, the DAX managed to hang strong. Next week is absent of any ‘high’ impact data events, and focus will likely be on general risk trends. The euro appears to be losing its grip on European equities, and could mean we are seeing a turn in the ‘strong euro/weak stocks’ theme. In the past month the euro has risen nearly 300 pips while the DAX has remained relatively unchanged during the same period.

The technical picture for the DAX has improved somewhat starting with the bounce from the August low. On Thursday, the German benchmark failed to stay above major resistance surrounding the 12300-level. It’s a formidable level, and if it we are to see higher prices a strong daily closing bar above 12363 will be needed. For now, as long as the DAX stays below resistance the outlook will remain neutral to bearish. 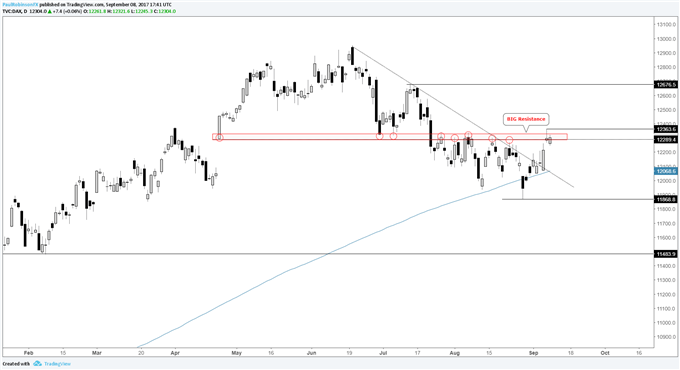 The calendar holds a couple of key events, with the highlight of the week coming on Thursday when the Bank of England is set to meet. Not looking for a big move out of the footsie on the meeting, but it’s certainly possible one side or the other the recent trading range is tested in its wake. Before the BoE, the Consumer Price Index (CPI) for August will be released on Tuesday. Look for the bigger response to both events to be in the price of sterling. For details on event timing, see the economic calendar.

The FTSE chart offers little to lean on at this time for directional cues as it continues to trade within a range for the past month. The footsie is holding onto the February 2016 trend-line at this time, but 7300 is the major focus. A clean drop below will constitute a breaking of significant horizontal support, a trigger of the double-top’s neckline, along with a break of the 200-day MA. This would likely lead to a drop to the next major level of support around the 7100-mark. But before we can turn bearish we must respect it as support until broken. Clearance beyond the top of the month-long range will be needed if prior highs are to be tested. 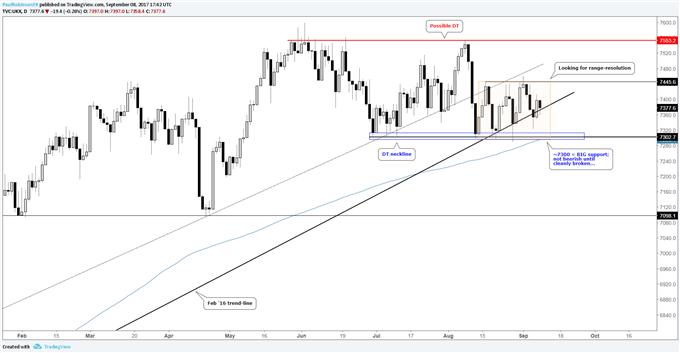