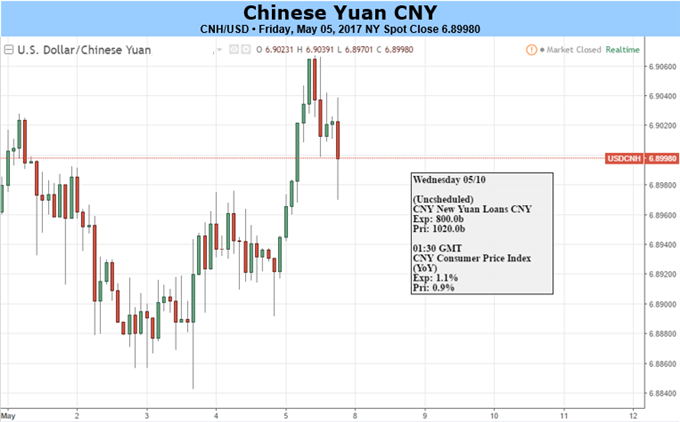 Yuan Runs to Resistance ahead of Trade, CPI Reports

The Chinese Yuan extended losses against the U.S. Dollar for the third consecutive week in the offshore market, although it has not yet broken the key resistance level of 6.8980. Looking forward, a heavy Chinese calendar is dotted with foreign reserves, exports and imports, Consumer Price Index (CPI) and New Yuan Loans. This has the Yuan at risk from home.

Chinese official and Caixin PMI reads for April released this week have already revealed producers’ difficulties. However, the economy may face a slowdown in a larger scope. According to estimations, in April, exports and imports weakened, Producer Price Index continued to drop, CPI improved slightly, and newly-issued credit declined. Despite that improvements were seen in the first quarter, China’s economic growth is expected to drop in the rest of 2017. Within such context, unless there is a big surprise in the prints to be released next week, the economic gauges are less likely to provide much support to the Yuan.

At the same time, policymakers seem to run out of new tools to further stimulus the economy. On one hand, the State Council has already announced a 380 billion Yuan tax cuts plan on April 19th, following the introduction of a 200 billion Yuan reduction on fees in the first quarter. On May 3rd, the Finance Ministry and the Taxation Department released detailed measures for tax cuts, marking it as the official implementation. Yet, this doesn’t mean companies can remove a total of 380 billion Yuan burden on their shoulders immediately; it will be lifted gradually and thus the eventual outcome could take months to show. In 2017, China set the targeted fiscal deficit ratio to be 3%, which is the highest level on record. Even if the country wants to use more fiscal stimulus, it has to be cautious about potential risks coming from cutting fiscal income further and putting on more debt.

On the other hand, the PBOC continued to manage liquidity in the financial system in a delicate way, through open market operations. The regulator has reiterated several times that it will keep monetary policy neutral, ruling out a possibility of using easing measures to support the economy before the price bubble risk is fully curbed. The April New Yuan Loans and home loans prints to be released on May 10th will give some update on this. These gauges have been used to evaluate whether excessive cash has flown into the housing sector, where the price bubble risk is seen the most.

In addition to the Dollar/Yuan rate, the Bitcoin/Yuan price is worth to keep an eye on as well. On Friday, the BTC/CNY hit a record high after the BTC/USD went on a record-breaking run for a week. Unlike the Japanese regulator that said yes to further Bitcoin development, or the U.S. regulator that said no but keep the door open for a yes, the Chinese regulator sent out a clear signal that China is not ready to have a digital currency to be used widely, even not to have a digital currency invented by itself. These mixed attitudes have Bitcoin exposed to different risks in its three largest markets and in turn elevate its volatility.