Watch the DAX, It Could Be on the Verge of a Big Move 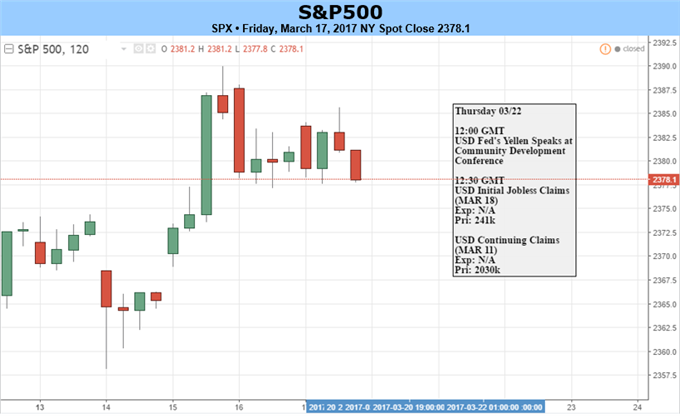 Last week was a busy one, with the FOMC, BoJ, and BoE all holding monetary policy meetings, however; looking ahead to next week we are left searching for any major catalysts for stocks on the economic calendar. On that note, markets are likely to be technically-driven.

There is potential for the coming week to be an important one for the DAX, and risk markets in general. As of late, we’ve been discussing the developing rising wedge in the German index. Last week’s price action went to solidify the formation, now it is a matter of waiting for it to break one way or the other. The health of global risk appetite suggests we will see higher prices, but we can’t rule out a down-side break, as these patterns can prove to be ominous after extended runs. If the DAX can close higher out of the pattern, the record highs from 2015 of 12391 could quickly come into play. However, a breakout to the upside from a rising wedge in a market which has been rallying for a good length of time is at risk of a reversal. If that is to be the case, a failure would likely come soon after the breakout. For now, in the event of a break higher we will run with what is presented to us and adjust accordingly should the market quickly negate a bullish break.

On the flip-side, should the DAX drop through the thoroughly tested under-side of the pattern and December trend-line, the resulting move lower could be sharp as the long-side of the market is caught leaning the wrong way.

The DAX will not embark on a big move by itself, material moves will unfold in other parts of the globe not called Germany. Looking to potential catalysts, we are left wanting as nothing of significance is penciled in on the economic calendar. This doesn’t mean, however, that the market can’t move on its own accord and unforeseen catalysts don’t show up. 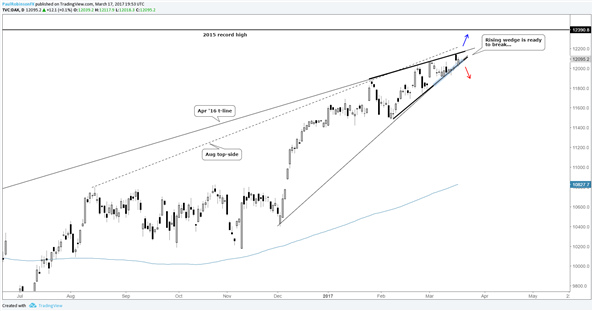 On Wednesday, the FOMC raised rates by 25-bps as expected, and provided a glide path for rates and language in the policy statement which did little to breed a tremendous amount of volatility in equity markets. The net response by stocks was a mildly positive one, while the US dollar was punished in the absence of anything to boost expectations beyond what the market was already looking for. In the coming week, Yellen will speak on Thursday, but it is unlikely her words will be market-moving given the proximity to last week’s policy meeting. On Friday, Durable Goods Orders for February will be released.

Turning to the technical picture, the market maintained a bullish tone after testing the confluence of trend-line support which comes by way of a ‘cross-through’ trend-line off the Feb ’16 low and the trend-line rising up from November. We will continue to lean on that in the near-term as support, and barring a strong daily close below the confluence of lines and a lower low below 2353, a neutral to upward bias will be maintained. The week ahead may turn out to be a period of consolidation, with minor dips met with buying. Watch the DAX, though, it could be ready to tell us what we need to know…

Looking to key events this coming week, the only ‘high’ impact piece of data the market may take interest in is the release of the Consumer Price Index (CPI) on Tuesday. Continuing risk of ‘Brexit’ headlines remains, of course.

The FTSE 100 closed to a new record high on Friday. Higher highs and higher lows have marked good trend-health since early February. A development we are not interested in fighting. That is not to say, though, the market is in the all-clear. Not far ahead lies top-side trend-lines extending over from peaks created back in 2015 and 2016; these could be problematic on a further advance. We’ll take note as to how the market responds should the FTSE continue to trade higher into those levels. It will require a hard price break to undermine the intermediate-term trend structure and warrant a defensive stance. Keep an eye on that DAX…