- While Brexit was not mentioned at yesterday’s Spring Budget, the government is said to be making contingency plans for life outside the EU.

- GBPUSD continues to fall as US rate hikes loom.

With Chancellor of the Exchequer Philip Hammond’s first, and last, Spring Budget out of the way – they now move full-time to autumn – investors’ attention will return to the thorny subject of Brexit. The UK government is still expected to trigger Article 50 by the end of March, and the lack of any further details from PM Theresa May and Brexit minister David Davis continues to weigh on the British Pound.

While Chancellor Hammond made no mention of Brexit at yesterday’s Budget, the lack of spending and the increased tax revenues on higher than expected growth will leave the Chancellor with some fiscal flexibility if the economy falters as the UK embarks on life outside the EU.

A recent interview by Hungarian Foreign Minister Peter Szijiarto will have given PM May some cheer, after the diplomat said that the European Union must resist implementing punishing trade barriers on the UK.

“We need to avoid a situation whereby the EU goes to the back of the line for Britain,” which is currently the bloc’s second-largest economy after Germany, Szijjarto said, adding “Losing such a partner and giving it away to others would be a suicidal strategy.”

While the slight change of tone from one EU nation will have been welcomed, the latest commentary from Scotland’s Nicola Sturgeon highlighted the ongoing domestic tension in the UK. According to the First Minister in an interview with the BBC, autumn 2018 would be a "common sense time" to hold another independence referendum, just months before the UK is expected to leave the EU.

In the meantime, the UK currency continues to weaken against both the USD and the EUR, hitting multi-week lows. A resurgent greenback, boosted by current expectations of at least three interest rate hikes this year, starting next week, currently trades around 1.21500 against the Pound, a level last seen on January 17 this year. And other important levels are also close by on the weekly chart with a trade below the mid-Jan low of 1.19822 opening the way to the October 3 low of 1.18000. 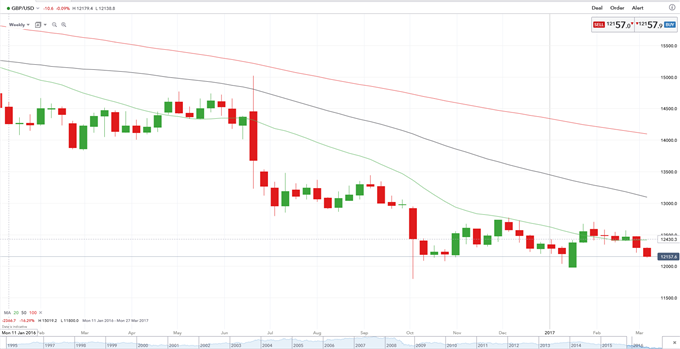 And Sterling continues to falter against the single currency as well, with the latest move prompted in part by the recent strength in Euro-Zone data and sentiment indicators. The latest growth forecast of 0.4% q/q and 1.7% y/y, coupled with inflation hitting 2%, have started to fuel the argument that the ECB may begin to send out a more hawkish tone in the coming months.