- GBPUSD stagnates ahead of President Donald Trump’s speech to a joint session of Congress.

The uncertainty over Brexit negotiations needs clearing up as soon as possible but it is not the only worry for British businesses going forward, according to a new report from the British Chambers of Commerce.

Titled Business Brexit Priorities, the report synthesizes feedback from over 400 businesses at 16 Chamber-hosted focus groups, along with nearly 20,000 responses to Chamber surveys.

The survey points out that business communities want “practical considerations, not ideology or politics” at the heart of Brexit discussions, as well as a clear domestic plan. According to BCC director general Adam Marshall,

"What's also clear is that the eventual Brexit deal is far from the only thing on the minds of the UK's business communities. An ambitious domestic agenda for business and the economy is also essential so that business can drive our post-Brexit success. Firms across the UK want a clear assurance that Brexit isn't going to be the only thing on the government's economic agenda for the next few years."

And the government will have the opportunity to lay out its new fiscal plans when Chancellor of the Exchequer Philip Hammond reveals his plans for the economy at the Spring Budget on Wednesday March 8. According to independent think-tank, the Resolution Foundation, the Chancellor may have more fiscal space than originally thought. “Healthier-than-expected tax receipts, the absence of any immediate post-referendum slowdown in growth and measurement changes are set to lower borrowing forecasts at next week’s Budget by £29bn between 2015-16 and 2020-21.” The note’s author, Matthew Whittaker added that while the government may choose to steer a steady course towards its budget deficit target, “within the existing envelope, there remains significant scope for reform and radicalism in the Budget.”

The British Pound is therefore likely to remain in thrall to the two competing influences in March as the government prepares to trigger Article 50 and lay out its fiscal plans for the year ahead. GBPUSD has remained mired in a fairly tight trading band for the last month and may well break out of this range if the government disappoints over the next four weeks. 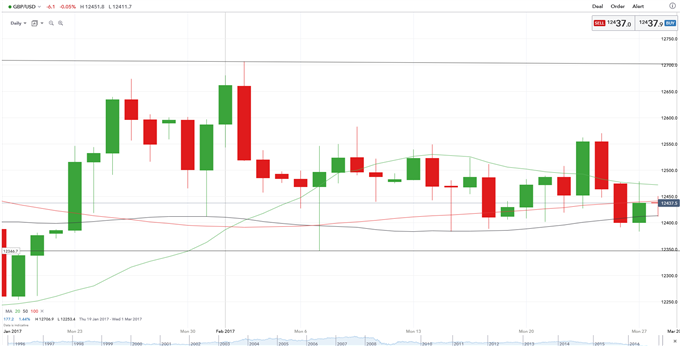