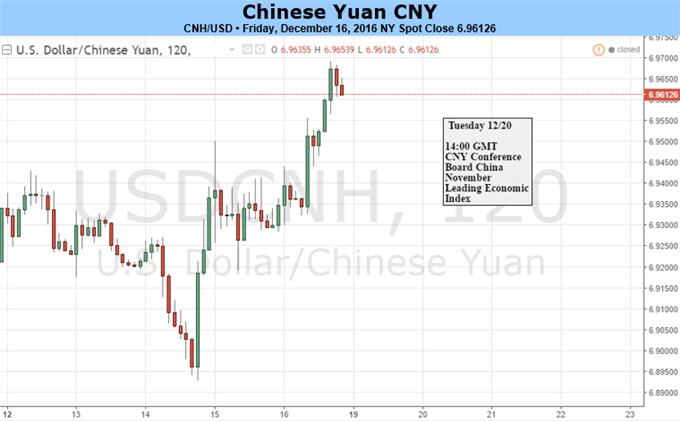 The onshore Yuan (CNY) dropped to the weakest level against the U.S. Dollar since June 2008 following Fed’s rate hike decision on Wednesday and continued to refresh the 8-year low point over the next two days. The offshore Yuan (CNH) lost against the Dollar as well and approached to the all-time low of 6.9652 on Friday. The PBOC weakened the Yuan against the Dollar to 6.9568 on Friday, breaking above 6.95 for the first time in eight and a half years. The borrowing costs for both onshore and offshore Yuan saw increases around Fed’s rate decision; however, they were driven by different factors, which may have contributed to a negative spread seen between the USD/CNH and the USD/CNY. Looking forward, the Yuan may continue to bear downward pressure against the Dollar in both markets, though the onshore rate may experience greater volatility amid the on-going turbulence in China’s domestic bond market.

The offshore Yuan funding costs began to pick up significantly ahead of the release of Fed’s rate decision. The overnight HIBOR increased from 4.61% on December 13th to 7.32% on the 14th and then 11.76% on the 15th. Also, the overnight HIBOR exceeded the 1-week HIBOR, which was normally seen when regulators intervened the market: The imminent-term rate surpasses longer-term rates. On Friday, the overnight benchmark rate remained at relatively high level of 10.00%, making it still expensive for investors to short the Yuan. As a result, despite that Fed’s more hawkish statement on interest rates will likely drive US Dollar rally against its counterparts including the Yuan, the offshore USD/CNH may steady pace in the near-term amid high costs in shorting the Yuan.

The onshore Yuan borrowing costs have been on upward trends as well, but for different reasons. The PBOC has been tightening onshore liquidity through open market operations, in the effort to guide both financial and non-financial institutions to reduce leverage and control risks. From overnight to 1-year term, Yuan funding costs in Shanghai interbank market have been rising since December 6th when the Central Bank began to withdraw cash injections once again. Amid draining liquidity, Chinese investors soon found the spread between long-term and short-term rates was narrowing and then reduce their holdings in high-leveraged long-term bonds.

Within such context, Fed’s rate hike and multiple rumors on domestic bond defaults triggered panic selling in China’s bond market on December 15th: Chinese 5-year and 10-year government bond futures plunged and then halted in trading; the government bond yields, which have an inverse relationship with prices, hit a 15-month high. In order to ease the tension, the Central Bank added a net of 45 billion Yuan through reverse repos and 394 billion Yuan through Medium-term Lending Facility (MLF) on December 16th; yet, SHIBOR in all terms were still rising on the day. Also, market demand in the Yuan will normally increase as it approach to the end of a year; Yuan’s supply through another source, in exchange of foreign currencies, showed continued declines. Taking into account all these factors, the PBOC may prioritize increasing Yuan injections in the onshore market next week rather than guiding the pace of onshore exchange rates, which leaves more room for the onshore Yuan to move in response to market pressures.