Brexit Briefing: Maybe It’s the Euro You Should Worry About, Not the Pound

- Thursday’s meeting of the European Council was dominated by squabbling among EU officials.

- Unless they can come together, the Euro is likely to suffer, rather than the British Pound, from the Brexit negotiations.

Thursday’s European Council meeting, at which the heads of state and government of all 28 EU member states came together in Brussels with the EU institutions’ officials, was a shambles. First, there was squabbling between officials and the European Parliament over who should be involved, and to what extent, in the divorce proceedings between the UK and the EU.

Second, the EU leaders spent precisely 20 minutes discussing Brexit. For sure, the refugee crisis and alleged ceasefire violations in Eastern Ukraine are important but Brexit presents an existential crisis for the European Union so you might think it worth more than what was described as a “short informal meeting”. An image published widely in the UK press showed the British Prime Minister, Theresa May, on her own – supposedly shunned by all those around her greeting each other warmly.

None of this suggests that the Brexit talks will be easy – but then nobody ever thought they would be. More to the point, it implies a truly worrying lack of cohesion within the EU that could hurt the Euro as much, if not more, than the British Pound in the months and years to come.

Of course, the UK is very isolated in the run up to the formal exit and may therefore not be in a position to get the “orderly and smooth” exit the Government has promised. Also, the fact that the other EU leaders only spent 20 minutes discussing Brexit could be seen as indicating that the ball is in the UK’s court and that it’s the British, not the other EU members, who need to do the worrying. Note though, that although it was the Pound that suffered most the day after the British public voted to leave the EU, the Euro will likely be hit hard too if those EU leaders and officials continue to argue among themselves.

That’s something many traders appear to have recognized already, with the Euro having fallen hard against the British Pound over the past two months, but in a market dominated by politics it would be unwise to think that the move might not extend further. The trend is your friend, as technical analysts say. 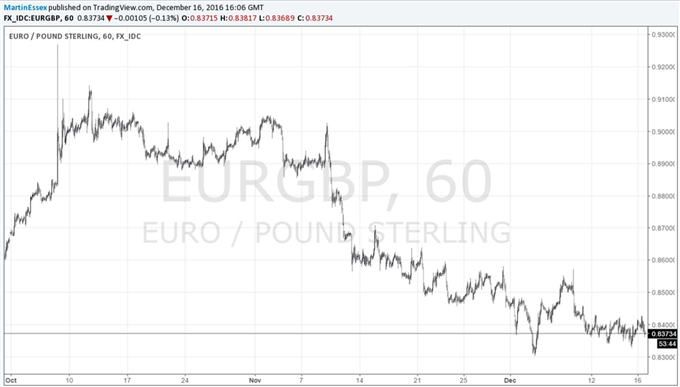 Trading in both currencies will likely be dominated by politics rather than economics next year, with not just the Brexit talks but elections in Germany, France, the Netherlands and possibly Italy on the agenda. The data meanwhile – and particularly confidence figures – will need watching closely as well. For if confidence starts to wane, the currency is likely to follow.

It’s therefore worth noting that an important batch of sentiment data is released in the week ahead, including the German Ifo business climate index and consumer confidence data for the UK, Germany and the Euro-Zone as a whole. Any sign that confidence in either the UK or the Euro-Zone – and by extension the two currencies – is beginning to fall back could be seen by some as a sell signal.