- Both inflation and unemployment data released this week were disappointing.

- The two reports appear to show that the UK economy is beginning to suffer from the Brexit vote.

- As a result, the British Pound could take another hit.

For upcoming data and events, see the DailyFX Economic Calendar. For a schedule of live coverage of key risk events impacting markets, check out the Webinar Calendar.

Ever since the British people voted on June 23 to leave the European Union, the UK economy has held up well, despite the forecasts of doom and gloom by those who wanted the country to remain inside the bloc. The British Pound too, after its initial tumble, has been creeping higher over the past two months.

But could that be about to change? Inflation data, released Tuesday, showed the headline rate rising to 1.2% in November against expectations of an uptick to 1.1% and an October reading of 0.9%. Core inflation rose to 1.4% against expectations of 1.3% and the previous month’s 1.2%. Inflation in November was the highest since October 2014 and input prices jumped 12.9% year-over-year last month, suggesting that the post-Brexit falls in the currency are starting to feed through to the real economy.

Then, labor market data, released Wednesday, showed the UK’s worst employment figures since the second quarter of 2015. Employment fell by 6,000 in the three months to October, according to official data from the Office for National Statistics, well below the consensus expectation of a 50,000 rise.The unemployment rate held steady at 4.8%, in line with expectations, but the ONS said this was primarily due to a rise in inactivity. Unemployment rose by a monthly 2,400 in November.

Impact on the British Pound

The British Pound climbed on the inflation figures as they suggested that the Bank of England may have to increase UK interest rates in due course, then fell on the weak jobs report. But what of the future? The Bank’s rate-setting Monetary Policy Committee will likely leaveBank Rate on hold at 0.25% when it meets Thursday, and its quantitative easing asset-purchase program at £435 billion. After all, there’s no urgency to raise rates while inflation remains so far below the 2.0% target even though inflation expectations have risen sharply since the summer, with one measure at its highest level since mid-2013.

Of course, if the MPC decides that inflation will overshoot in time, due to the surge in factory-gate prices, it could well decide to tighten monetary policy, potentially boosting the Pound. However, it will be loath to do so if the economy seems to be slowing as the labor market data imply and while the inflation target is still some way away.

Instead, it would be foolish to rule out completely another rate cut in 2017 and an extension of the asset-buying program to lift the economy, particularly while there’s persistent uncertainty about when the UK will trigger Article 50 of the Treaty of Lisbon to begin the formal process of leaving the EU. Moreover, while there now seems likely to be some kind of transitional period between then and the actual exit – a so-called “soft Brexit” – a “hard Brexit” in which the UK is in one day and out the next still can’t be ruled out.

That all seems likely to mean continuing downward pressure on the Pound, particularly if a hard Brexit becomes increasingly likely. 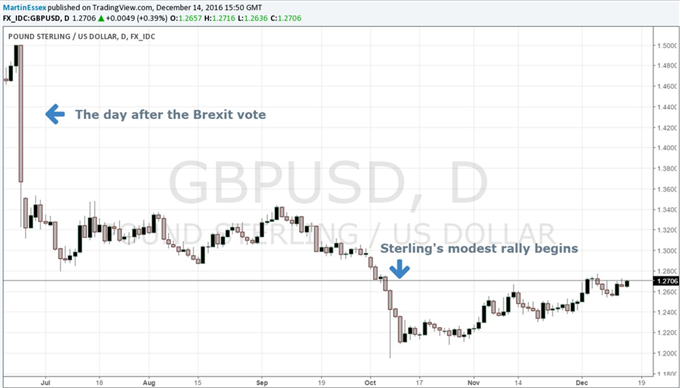