- Higher oil prices could push costs even higher in 2017.

- GBPUSD could be capped as Brexit talks near early next year.

Inflation rose faster than expected in November as import prices jumped to levels last seen in 2011 as the post-EU Referendum fall in the British Pound begins to feed through. The latest rise in oil prices will do nothing to dampen further consumer price rises in the future.

Annual headline inflation rose to +1.2% in November against expectations of an uptick to +1.1%, and a prior reading of +0.9% (y/y), while core inflation rose to +1.4% against expectations of +1.3% and the prior month’s +1.2%. Inflation in November was the highest since October 2014 (+1.3%). Input prices also jumped +12.9% year-over-year in November, suggesting that the impact of the weaker British Pound post-Brexit is only in its early stages

“Rises in the prices of clothing, motor fuels and a variety of recreational and cultural goods and services, most notably data processing equipment, were the main contributors to the increase in the rate. These upward pressures were partially offset by falls in air and sea fares,” according to the Office for National Statistics.

The Bank of England’s latest forecast highlighted that consumer price inflation could rise to +2.7% in 2017 largely due to a +15% drop in the GBP/USD exchange rate since the UK voted to leave the European Union in June. The BOE also said that while it may look through an inflation overshoot in the shortterm if the economy wasn’t growing in line with expectations, “Monetary policy can respond, in either direction, to changes to the economic outlook as they unfold to ensure a sustainable return of inflation to the 2% target.”

While inflation looks set to push ahead strongly going into next year, further rises in the Pound look likely to be capped ahead of the Government triggering Article 50, expected in March 2017. Speaking on Monday, UK Chancellor of the Exchequer Philip Hammond said that it may be beneficial to have a transition period during the Brexit discussion, “if there is a genuine meeting of minds on both sides of this negotiation that they are beneficial.” While Hammond’s “soft Brexit” approach may be supportive of the UK currency in the short-term, divorce negotiations are expected to be difficult and long-running. 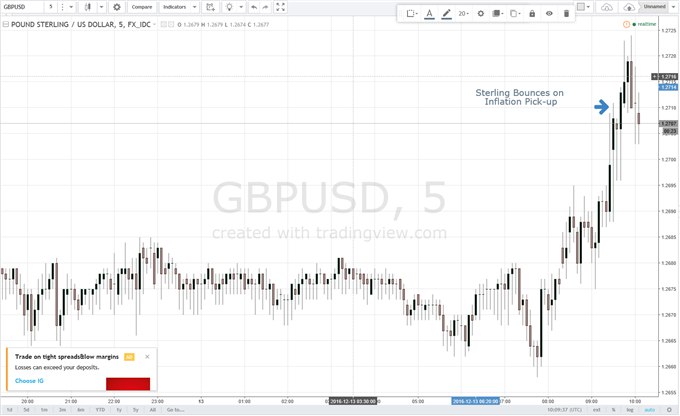