-Employment falls by 6,000 in the three months to October, well below the consensus expectation of a 50,000 rise.

- Is this the first genuinely disappointing data since Brexit?

- Pound falls against Dollar, Euro and Yen after the report’s release.

The British Pound has dropped against a host of pairs after the UK’s worst employment figures since the second quarter of 2015. Employment fell by 6,000 in the three months to October, according to official data released Wednesday morning by the Office for National Statistics, well below the consensus expectation of a 50,000 rise.

The unemployment rate held steady at 4.8%, in line with expectations, but the ONS said this was primarily down to a rise in inactivity. Unemployment rose by a monthly 2,400 in November.

Commenting on today’s labor market figures, ONS senior statistician David Freeman said: “The labor market appears to have flattened off in recent months. While the employment rate remains high, it is slightly down on the record set recently. Meanwhile a small fall in unemployment on the quarter was more than offset by a rise in economic inactivity.”

How alarming is this? It depends who you ask. The labor market, just like other parts of the UK economy, has been showing signs of resilience since the Brexit vote in June. But many warn that next year is likely to prove increasingly difficult for the economy and the jobs market as uncertainty mounts in the run up to the government triggering Article 50, which begins the country’s formal departure from the European Union.

This scenario would be Pound-negative because any sign of muted earnings growth crimping consumer spending, along with a marked rise in ‘the wrong kind of’ inflation, will put pressure on the Bank of England to raise interest rates.

But others feel differently, believing the UK will continue to fend off the doomsayers.

Indeed, today’s jobs report wasn’t all bad. Average weekly earnings excluding bonuses rose by 2.6% in the year to October - slightly higher than the previous month, and the fastest wage gains since June.

Unemployment fell by 16,000 to 1.62 million in the three months to October, and the UK has, at 74.4%, one of the lowest unemployment rates in the European Union. The employment data are also erratic and viable to swing in either direction.

For the moment though, markets have taken this is a soft report. Indeed, it could prove to be the first genuine disappointment in the hard data since the Brexit vote.

The Pound fell against the Dollar, Euro and Yen in early Wednesday trading. GBPUSD has dropped to a low of 1.2639 – particularly concerning considering that the Dollar is generally docile in the run up to today’s FOMC meeting. EURGBP fell to low of 0.83738 after the release, but has since recovered after poor industrial production data out of the Euro-Zone. GBPJPY, which has been broadly rising of late, dropped to a low of 145.180 in the aftermath of the report. 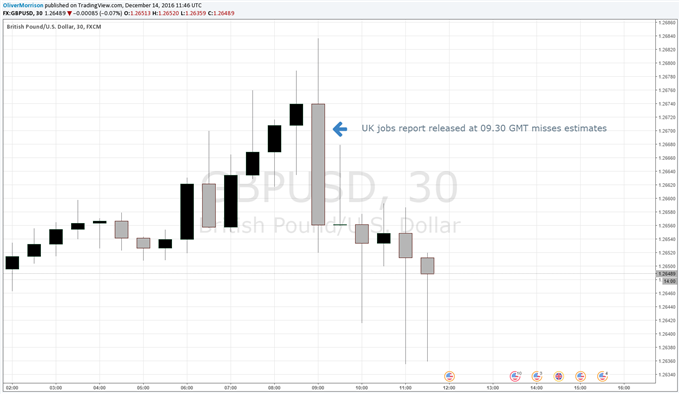