Understanding What Bitcoin & Gold Have In Common in Financial Markets

The cryptocurrency Bitcoin appears to be back in a big way. Calling Bitcoin (Trading View Ticker: BTCUSD) a cryptocurrency can be enough to make most people turn the page in search of a lighter read. However, a quick introduction can help you see how this innovative coin that is now ~7.5 years old has gone from a coder’s coin and known by only a few hobbyists to an asset class in a class of itself. 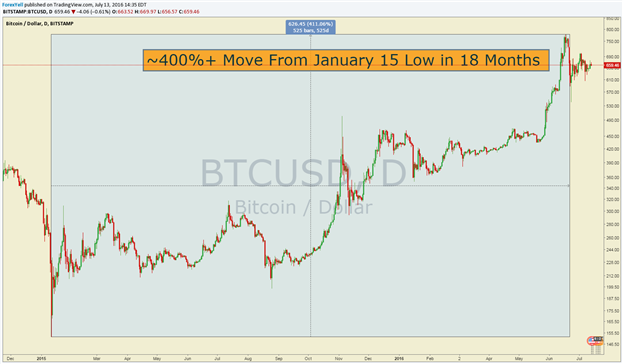 Is It Time To Take Bitcoin Seriously?

Only a handful of people have been following Bitcoin since the creator, Satoshi Nakamoto introduced and explained how and why Bitcoin could work first introduced the digital asset on the cryptography mail archive. However, now many people have at least heard of the Bitcoin though few fully grasp the implications of both commerce and financial markets if Bitcoin can hit the proverbial ‘Tipping Point.'

Regardless of whether or not we’ve hit the tipping point, it is worth taking Bitcoin seriously as it has not only stood the test of time, but the technology that is underlying BTC, the blockchain, has garnered the attention of Goldman Sachs, Citibank, JPMorgan, BNP Paribas and many more as the ‘Next Big Thing’ in Financial Markets. Developed markets with some of the most distraught monetary managers like Brazil have recently seen Bitcoin Trading surpass Gold trading per Cryptocoin News.

Make no mistake; some will call Bitcoin a fad who will fade away into the oblivion of Financial Innovation in a similar fate of Adjustable Rate Mortgages, while others will say the Bitcoin has and will continue to change everything. While I lay to closer to the ‘Change Everything’ extreme, it has yet to be fully adopted, and likely will not be fully adopted as a replacement of fiat currency for multiple reasons.

At the top of the list for reasons a developed economy would refuse to adopt Bitcoin over the local currency is that the global amount of BTC is fixed at 21 million bitcoins, with ~14 million in existence today. That means if the economy is to grow, the government would need to spend less, and save more in order to buy BTC to build the economy or tax citizens on the BTC they hold, which is inherently difficult. However, it would be an unlikely event to see governments willingly give-up the desire to print and tax in hopes of re-election.

How Can Understanding Bitcoin Help Traders of Spot Gold? 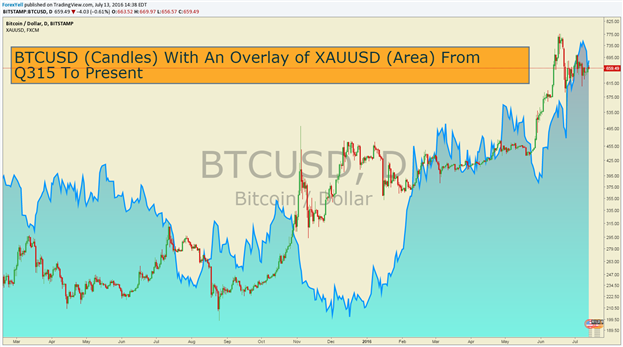 This section could have easily been titled, how I came to respect Bitcoin. It is hard to say that we’ll look back on the creation of the Bitcoin in the same light as the Guttenberg press or the Internet, it’s fair to say that it inspires the same ‘Animal Spirits’ that causes Gold (CFD: XAUUSD) to go bid when investors look for a haven asset as a store of value.

It doesn’t appear to be coincidence when that Bitcoin came onto the seen as banks were being bailed out as the initial or genesis block with the first transaction referenced a Times article dated 03/01/2009 titled, ‘Chancellor on Brink of Second Bailout for Banks.’ A few days later the source code of Bitcoin was released by Satoshi.

Either way, the spirit behind buying gold and buying bitcoin appears to be very similar. In a ‘doomsday scenario’ where you desire an asset to hold value while other fiat-priced assets are plummeting in value, BTC like Gold is ideal for bartering. The difference is that BTC can allow bartering to be done digitally thanks to the blockchain (more on that in a later post for the geeks out there like myself), whereas gold would most likely be bartered face-to-face in the event of an economic collapse.

As you can see on the chart above, this mutual symbiotic relationship can be seen with an overlay of Gold (CFD: XAUUSD) and BTCUSD.

[Warning: A Bit of Technical Info Ahead]

One last note before moving on (kudos for reading this far), Bitcoin’s network and maintenance is what sets it apart from fiat currencies, and places it in a similar league as precious metals such as Gold. First, the ledger, known as the blockchain is considered trustless in that it must be verified my multiple nodes called miners that verify, validate Bitcoin transactions. Typically, this is done by a bank, which acts as a one trusted third-party (see opening quote from Satoshi,) whereas Bitcoin utilizes a distributed network of miners to confirm transactions so there cannot be a single point of failure or misuse as we’ve seen with Rogue Traders or Bank Executives cheating out bondholders/ equity holders. Lastly, the base algorithm is cryptographic and is known as an asymmetric encryption that allows public and private keys to validate a transaction that is then validated by the network.

In this manner, Bitcoin is allowed to act as a digital barter currency without the need for banks and helps to accomplish what Gold has accomplished for millennia by acting as a store of value in bad times and good times, and accepted at all times if the price is right.

[You May Now Turn-Off Your Hard Thinking Cap]

Lucky you, DailyFX will begin covering Bitcoin. Historically , we’ve covered Bitcoin in relation to sharp price increases in the wake of Brexit or the Eurozone crisis, or the Yuan Devaluation. However, given the correlation of XAUUSD & BTCUSD and the rising popularity of BTCUSD, we felt you’d be interested in learning more about the development of this pseudo-currency / neo-haven asset as it turns toward its awkward growth years of potential adaptability into everyday utilization.

If you’re interested in seeing price trends of Bitcoin, the best place to keep an eye on these moves throughout the day is the DailyFX Chart Page where you can keep an eye on BTCUSD or BTCEUR if you wish. However, if you’re keeping an eye on BTC trends in the desire to get a better understanding on the price direction of Gold, it’s likely best to look at BTCUSD. Both BTCUSD & Gold (CFD: XAUUSD) are priced in US Dollar so that a big move in the US Dollar can heavily influence both assets.

Thank you for your time, and we look forward to providing you with more information on this new type of currency where a desire for haven digital assets and technology meet.

Happy Trading & Please Let Me Know If You Have Any Questions