Bitcoin Surges, Is It On Track to Become a ’Reserve Currency’?

Cryptocurrency Bitcoin has found its way to a dramatic recovery. There are numerous reasons being offered, but this move may be more important for what it can reflect in the financial system. First, taking stock of the impressive move carved out by Bitcoin, the e-currency has charged its strongest run against the benchmark fiat currency in nearly two years. In the three-days through early Asia trade Wednesday morning, the BTC-USD exchange rate climbed an incredible 33 percent. For comparison, the run versus the Euro tallied as much as 25 percent, Pound 27 percent and Chinese Yuan 30 percent. 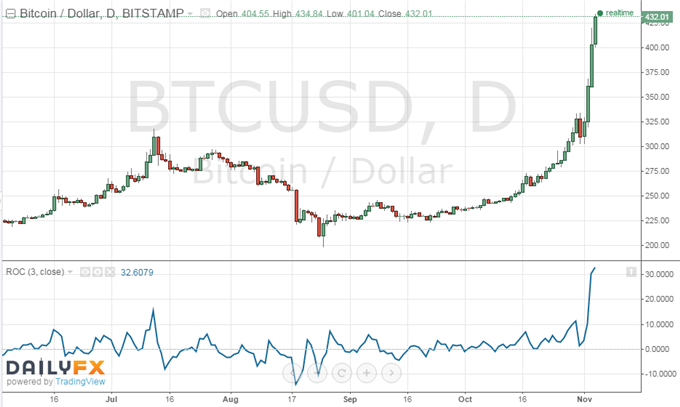 In normal FX circles, a move of that magnitude is unheard of. However, for the relatively young alternative to traditional currency has seen plenty of volatility of this magnitude in its short life. That said, we still haven’t seen an upswing this strong since a swell through December 9, 2013. It is tempting to see the incredible run of that previous phase of rapid expansion and extrapolate a repeat of history; however there needs to be fundamental charge and greater liquidity may actually work against such a repeat. 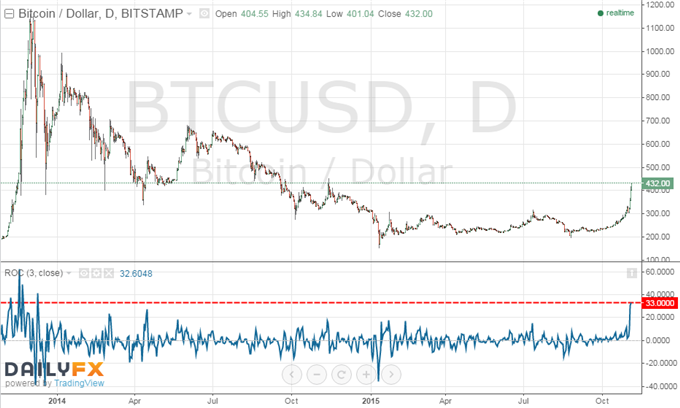 There have been a number of fundamental headlines that have carried the bulls’ optimism over the currency’s aggressive climb recently. However, only a few hold real water.

Amongst the most convincing was the European Union’s top court ruling on October 22 that Bitcoin and virtual currency should be exempt from VAT tax. That is a significant step towards legitimacy as a true alternative to the fiat currencies the new money is looking to supplant.

Reflecting a similar situation to the original swell from Bitcoin when capital controls in Cyprus encouraged funds to tap the anonymous transfer to move money, there is a growing theory that China’s restrictions on individuals transferring more than $50,000 may be encouraging an effort to circumvent authorities. This is difficult to verify but volumes with the CNY seem to give it weight.

Carrying less urgency but greater legitimacy overall, there has also been a growing interest among financial institutions in the ‘blockchain’ technology behind Bitcoin. Major industry groups have been established to explore the use of this technology to improve trade processing and other venues. R3 and Digital Asset Holdings have already pulled a number of banks into the equation.

Perhaps one of the most dubious stories comes from an industry report that suggested Bitcoin would be ranked among the world’s largest reserve currencies by 2030. The survey was conducted with Bitcoin companies, so it was bound to have an optimistic outcome. The cryptocurrency is at its core an effort to replace the traditional fiat vehicles that represent reserve currencies.

More to Learn from Bitcoin

Much of the interest in the tremendous climb in Bitcoin centers on a mentality of ‘how can I jump in and ride the volatility’. This is similar to past interest in illiquid assets like the Iraqi Dinar. Volatility for volatilities-sake invites tremendous risk. The last time dramatic rise from Bitcoin evolved into a crushing collapse. That is a likely outcome going forward as it is still exceptionally volatile and not well integrated in the financial system.

However, a few structural lessons can be drawn from this unique rise of a new type of currency. We are seeing the evolution of financing and the financial system in an age of rapidly advancing technology. Not too long ago, a dominance of physical cash used in global transactions has shifted to digital transactions via credit/debit cards, transfers and trades. Even if this effort to subvert government watch doesn’t fully take, there are necessary elements of this effort that will work their way into the financial system.

Where Bitcoin would be an unlikely sell to join the IMF’s SDR for reserve currencies, the conversation that it starts can be establish what it takes to win the designation. That is particularly important nowadays with China attempting to rapidly evolve its financial system in order to meet requirements for the coveted title and the access it provides to the global system.

There is also a speculative element to this fledgling market. If we are to believe the product will be a permanent feature on the landscape and liquidity fills out, there will be an arbitrage opportunity to arise from its choppy pricing. For example, in the graph below, we can see the official EURUSD exchange rate versus the synthetic version of the same rate using Bitcoin crosses. Theoretically, they should be matches or there is arbitrage. However, if liquidity doesn’t grow behind the market, that gap can remain and have periods of extreme divergence. 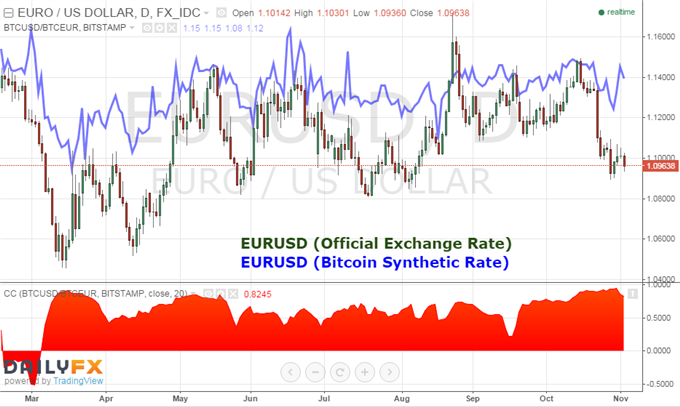 While the arbitrage aspect may not yet be a reliable opportunity for the industrious trader, there is a considerable correlation for the EURUSD and its synthetic. That signals sound theory of the market pricing a reasonable equivalent. That said, this evaluation can be used with exchange rates that have government intervention or influence – such as with China or Brazil – where a market-derived level may differ. We can see a sizable divergence between the official USDCNY rate and its synthetic below. 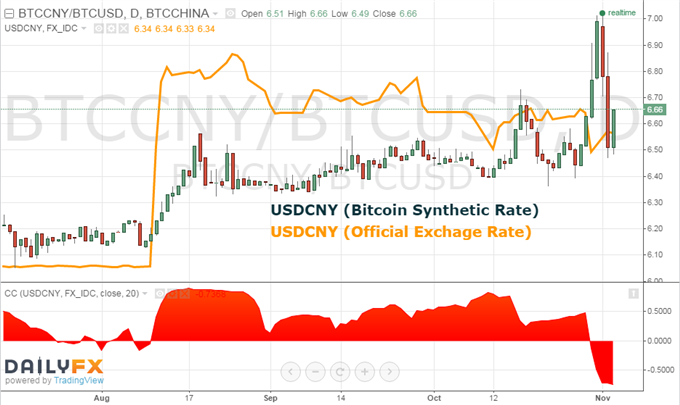