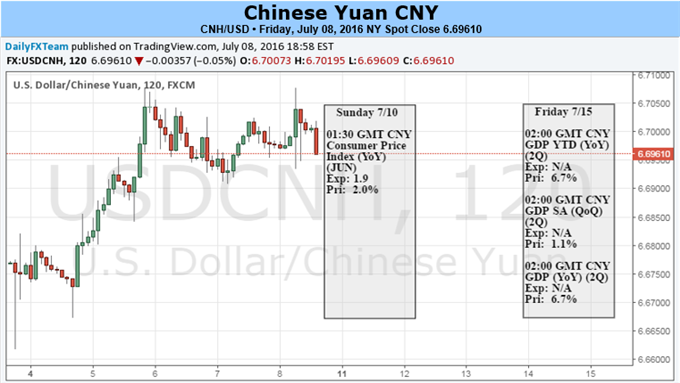 To Track the Dollar, or to Track the Basket; That is the Question Around the Yuan

Fundamental Forecast for the Yuan: BEARISH

China’s fundamentals are likely to provide little support to Yuan rates in the coming week. China’s 2Q GDP to be released on July 14th is expected to grow at 6.6%. China’s growth in the first quarter has already dropped to 6.7%, the lowest level since 1Q’2009. Last week, China’s Statistics Bureau revised the GDP calculation method.Under the new method the value of 2015 GDP was revised up by 879.8 billion Yuan; however, growth only increased by +0.04%. Thus, the accounting adjustment is less likely to make a significant change to the 2Q GDP print. Also, China’s trade condition is expected to further diminish: imports are expected to shrink for another month with a drop of -6.2% and exports are expected to contract by -5.0%. Within the country, the growth in Industrial Production is expected to slow down to 5.9% in June and the Retail Sales in the same month is expected to drop to 9.9%. China’s fixed assets investment excluding rural households may to continue to drop as well: the June figure is expected to fall to 9.4%. In a nutshell, the past month and quarter could be the worse for the world’s second largest economy since the global financial crisis. Amid the nation-wide slowdown, Yuan rates are lacking upward momentum.

Another crucial indicator for China’s economy is the Consumer Price Index (CPI) gauge. The June print is scheduled to be released on Saturday, July 9th. This will not only reveal China’s inflation but may also impact the PBOC’s monetary policy. With drops in pork and vegetable prices, the June CPI read is expected to fall below 2% for the first time in four months. Bloomberg has revised down the consensus forecast for the June CPI print to 1.8% from 1.9% in the last week. A lower CPI reading leaves even more room for the PBOC to add liquidity before the CPI reaches the target level of 3.0%. However, this does not mean the Central Bank will introduce further easing programs, such as interest rate cuts. In fact, the PBOC has been carefully managing liquidity supply. Over the past week, China’s Central Bank has removed 645 billion yuan from the market, the highest amount in four months. SHIBOR O/N, a benchmark rate, also fell below the threshold of 2.000%. Injecting excessive cash could lead to price bubbles, which have been seen in some sectors in China following the five rate cuts in 2015. Coupled with the global turbulence caused by Brexit, China’s Central Bank is likely to maintain moderate monetary policy, neither too loose nor too tight. This will leave less downward pressure on the Yuan.

Last but not least, the PBOC may continue to guide the Yuan lower against the US Dollar in the effort of maintaining the Chinese currency’s relative stability to the currency basket. The probability of the Bank of England cutting rates by 25bp is 18.2% according to Credit Suisse. If the British Pound continues to drop, such as it would if being driven by a rate cut, the PBOC has to devalue the Yuan against the US Dollar in the effort to evening-out changes in the Yuan basket. Or else, the PBOC needs to revise its exchange rate target, such as temporarily re-pegging the Yuan against the US Dollar and loosening reference to the currency basket. Either move could bring a huge impact to the Dollar/Yuan rate.