Colombia Protests May Pressure Peso Despite Surge in Commodity Prices

The Colombian Peso underwent a rapid selloff in late April and into early May after the Colombian government’s proposed tax reforms sparked protests across the nation. The uncertainty of the situation – coupled with the uneasy backdrop of Covid-19 – sent COP tumbling along with BVC, the country’s benchmark stock index. 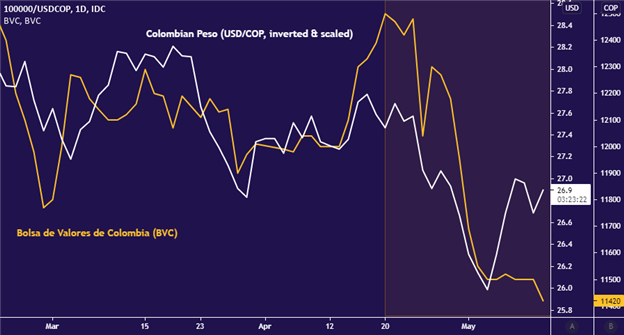 The government of President Iván Duque Márquez put forward a controversial bill that would raise taxes on food, utilities and other essential products. It has since been scrapped and the Finance Minister resigned. Officials also thought about expanding the tax reform, justifying the measure with a desire to maintain the country’s investment grade rating.

As it stands, the outlook from many ratings agencies stands at “negative”, with Fitch assigning a BBB- assessment – one tier away from what would be considered below “investment grade”. For the government, an additional downgrade could cause local bond yields to surge as investors start to doubt the state’s ability to service its debt.

From there, financial panic would likely ensue. Domestic equities would likely plummet, the selloff in the Peso would accelerate, and credit access from abroad would either come with strict terms or be completely restricted. A similar dynamic played out in Greece, plunging that country into a deep recession and leading to the broader Eurozone Debt Crisis that brought years of unrest and uncertainty.

Recommended by Dimitri Zabelin
Building Confidence in Trading
Get My Guide

The protests have persisted and morphed into a general demand for structural reformsdespite the Colombian government backing away from the tax hike. The menu of sought-after changes includes rooting out corruption and improving living standards by addressing access to healthcare and education as well as overall inequality.

While the total number of protestors killed in clashes with government forces is disputed, baseline statistics suggest that over 30 people have died and many more were injured. The crisis deepened after talks between the President and opposition leaders broke down. Furthermore, the protests have pushed Covid-19 cases higher, which will likely elongate Colombia’s economic recovery.

As mentioned previously, vaccination rates continue to rise and economic growth is showing signs of a rebound globally. While manufacturing and trade are recovering to pre-pandemic levels, the service sector continues to lag across developed and emerging market economies. 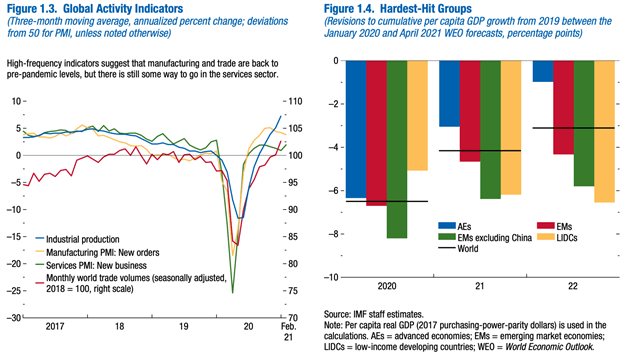 While Colombia is predominately a service-based economy, commodity exports play an important role. The top export is petroleum, with coffee and gold not far behind. Year-to-date, ICE Brent is up over 30% and coffee is clocking in gains just above 15%. Gold is the relative loser, down approximately 3.2%. Rising yields can be thanked in part for the precious metal’s decline.

A weaker US Dollar and an uptick in economic growth – with its promise of a pickup in demand for key commodity inputs – could help cushion COP against some losses. Having said that, domestic political uncertainty may well ripple out into the broader financial markets. Implied one-month volatility for LATAM currencies vs. USD derived from options markets has the Colombian Peso at 14.8, which is second only to the Brazilian Real at 16.7.

USD/COP has been on a steady uptrend since the start of the year, and more recently has received a boost from political volatility in Colombia. The pair surged over six percent between late April and early May when domestic turmoil was a novel risk to price in for investors. The Colombian Peso succumbed to selling pressure as a result, catapulting USD/COP upward. 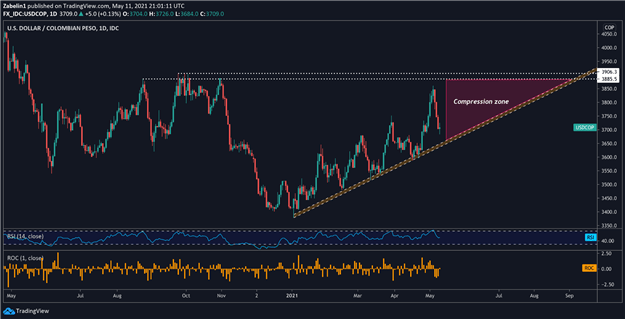 It is important to note that during this period, the US Dollar remained relatively flat against an average of its top counterparts. This suggests that the move in USD/COP was driven mostly by COP selling. This distinction is important to note since it appears to suggest – at least for now – that the pair’s price action is in large part being dictated by domestic political volatility rather than the macro forces dictating the path of USD.

Looking ahead on the weekly chart, USD/COP appears to be entering a compression zone defined by the parameters of the uptrend and upcoming resistance at 3885.5. The pair may continue to trade within this zone until it reveals an underlying directional bias by either breaking out above resistance or capitulating and shattering the floor.