A Key Yield Curve Inverted, But Should Investors Worry?

The inverted 3-month and 10-year US sovereign yield curve has many worried about whether a recession is close by since the last time this happened was in 2008.

A yield curve inversion tends to occur when there is an economic slowdown and lenders are willing to earn a lower interest rate due to the prediction that the Fed will cut short-term interest rates.

There have been many debates about the direction of the current economy by different analysts. However, it is important to note that the situation today is different than what it was due to enhanced central bank intervention in capital markets post 2008.

The current economy does not seem to be in the same position as it was before the 2008 recession. Inflation, for the most part, is not too high and currently rests at 1.7%, not far from the forecasted rate of 1.8% and the target rate of 2%. 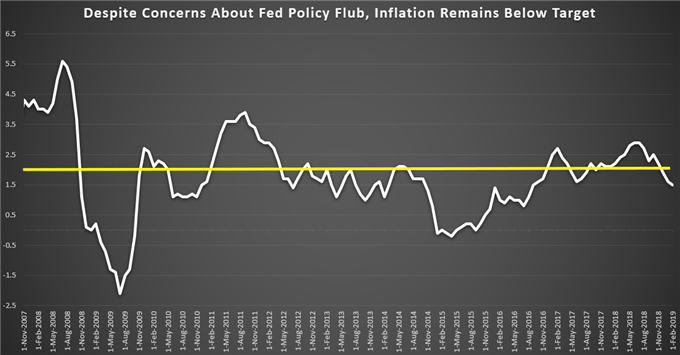 When looking at the graph above during the 2008 recession, we notice that the inflation spiked at around 5.6%, a lot higher than the 2% target.

When evaluating whether a market is close to recession, the inflation rate is one of many factors to consider. One of the signals is uncontrollable inflation, which results from an excess supply of money circulating around. Given that the Fed has stated that they will refrain from reducing their balance sheet (i.e., allowing more bonds to remain in the market), this may indicate that a recession is not present in the near future.

High yield bonds represent corporate bonds that carry higher risks due to their higher risk of default whereas investment grade bonds are lower risk investments, which tend to have a credit rating of BBB- or higher according to Standard & Poor.

In the graph above, we notice the spread between high yield bonds and investment grade bonds have been trending lower.

The lower trending spread indicates that these higher risk bonds have investors feeling as though there is a lower probability of default. Hence, why the spread narrowed since the beginning to the year.

If the economy were headed towards a recession, the spread between these two investments would widen out of fear that corporations would default on their debt obligations. However, this does not seem to be the case.Therefore, this is another one of many factors that could signal that it may be too soon for investors to fear the market.