That escalated quickly. While energy markets were moving higher under potential supply shocks, a domino of events in global macro markets shifted the conversation to too much supply relative to possibly shrinking demand.

Commodities are one of the pure supply and demand markets left, and when the shifts in the balances of demand or supply arise, sharp price moves often result.

This fundamental walkthrough of Crude’s breakdown will walk through four lenses of viewing the breakdown that may show a v-bottom may be difficult to actualize despite RSI(14) being the most oversold since 2014. 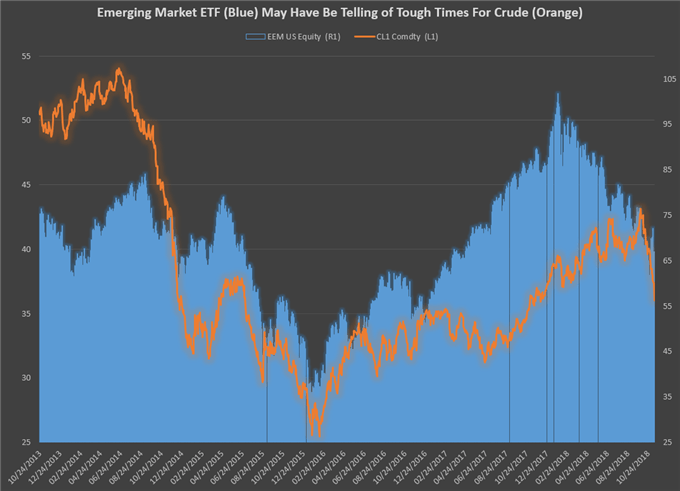 The chart above shows the toping process that happened early in the year on EEM. EEM has fallen ~24% on the back of trade wars concerns and limited demand from China and other formerly strong emerging markets. Much of this drop has accelerated as the US Dollar has strengthened on the back of the Federal Reserve’s persistent hike of interest rates with views building that 3-4 hikes could be coming in the next year.

For energy demand, emerging markets are a near necessity as their demand tends to convert less from services and consumption as in developed markets and into real estate development and industrial demand. Therefore, the sharp drop in EEM over 2018 has also eaten into the perceived demand for crude. 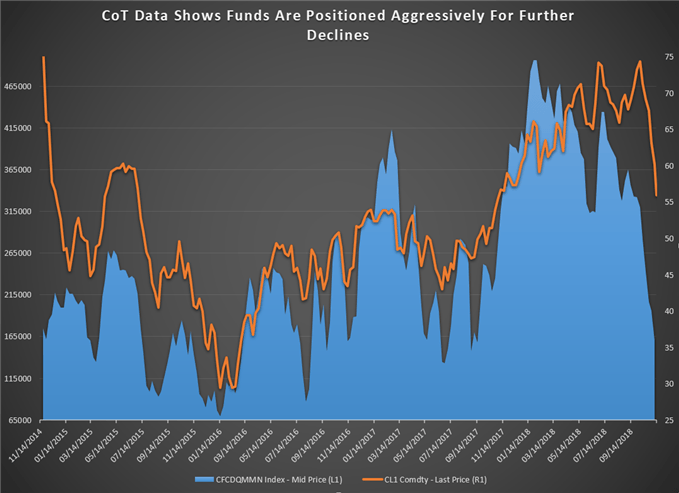 Money managers have fallen out of love with crude. The chart above shows the net positions, which has fallen steadily over the year gave the move higher in crude through early October was standing on hollow legs.

The positioning data above fails to show the extreme dearth of long-only hedge fund positions, which stands at the lowest levels since 2014as if the 14-month low in net-positions was not bad enough. In other words, from an institutional positioning point of view, the buyers have left the building. 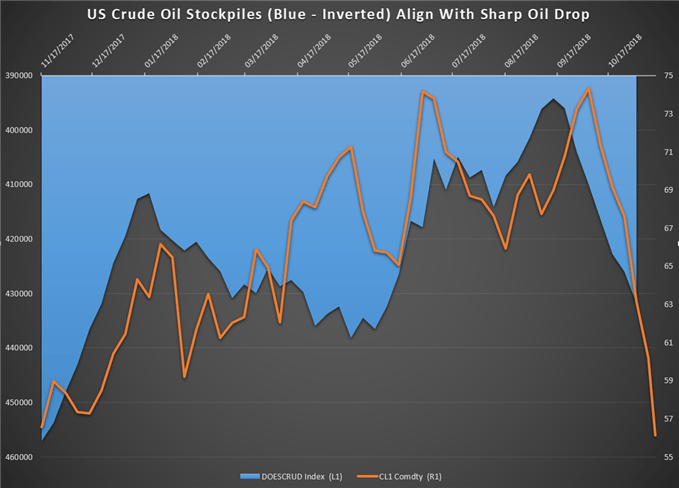 Over the last few years, the market has ridden on the news of production curbs from OPEC and strategic alliances. At the start of the week, there was a seeming bounce that was soon erased when news from newly planned production cuts from OPEC may resurface that could last through 2019.

However, this production curb strategy mainly works if we’re only dealing with an oversupply issue and not a problem with demand as well. The chart above shows an inverted view of US stockpiles in blue with crude oil in orange. Since the chart is inverted, the blue line falling is showing a growth in stockpiles that communicates a drop in demand.

Since mid-September supplies have been steadily building, which also shows the divergence of the last really in early October. 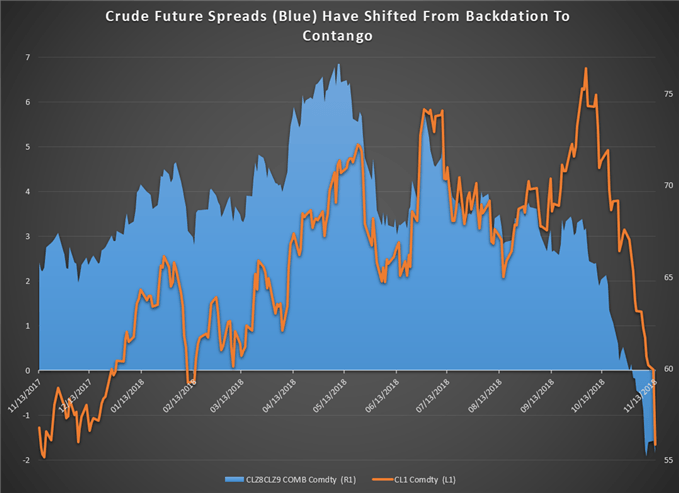 The futures curve is a tool that speculators and hedgers or corporates alike look to as the perceived fair value of an asset at different points in time due to the available information. The back of the curve is often a helpful source of information about sentiment and perceived effects of current policies.

You’ll notice a sharp drop in the spread to negative $1.85 to the lowest level since mid-2016 when Crude was trading in the lower $40s.

Crude seemed to be holding up on a potential supply shock from a combination of depletion rates from key OPEC producers as well as Iranian sanctions. However, the falling demand narrative quickly took over at the same time that exceptions were granted by the US on Iranian sanctions.

Crude put many traders (including yours truly) in a tough place as the possible supply shock could have sent prices soaring higher. In fact, there were options contracts being purchased at aggressive volumes that would have paid out on a move above $100/bbl.

Needless to say, this narrative did not play out, but there were bets placed that such a move would happen. Now the market is pricing in a new narrative as the lower-for-longer view is coming back into focus.

More DailyFX Support For Your Trading

Are you looking for longer-term analysis of Crude Oil and other popular markets? Our DailyFX Forecasts for Q4 have a section for each primary currency, and we also offer an excess of resources on USD-pairs such as EUR/USD, GBP/USD, USD/JPY, AUD/USD. Traders can also stay up with near-term positioning via our popular and free IG Client Sentiment Indicator.

Our trading guides bring our DailyFX Quarterly Forecasts and our Top Trading Opportunities, and our real-time news feedhas intra-day interactions from the DailyFX team. And if you’re looking for real-time analysis, our DailyFX Webinars offer numerous sessions each week in which you can see how and why we’re looking at what we’re looking at.