Not sure why USD continues to trade lower? You may enjoy our FREE dollar forecast.

The dollar bulls may soon be running out of reasons why the downtrend is a fluke that’s soon to turn. This week presented two positive headlines in the form of NFP on Friday showing a beat of private jobs added to the economy and a Federal Reserve willing to look through the data. However, the dollar still ended the week trading at its lowest levels of 2017. While there were other important data points that came out this week worth mentioning that disappointed, Average Hourly Earning (AHE) missed expectations. AHE is a key component in the reflation trade,which along with commodities, appears to be slipping.

On Thursday, the US Breakeven 10 year, which helps gauge the future inflation expectations of bond traders by subtracting the real yield of the inflation-linked maturity curve from the yield of the closest nominal Treasury maturity fell to the lowest level since Donald Trump was elected. Meanwhile, German 10-year yields continue to push higher, which is helping to explain why EUR/USD pushes persistently higher. Not coincidentally, that was a driving force behind my recent EUR/USD analyst pick: Bullish EUR/USD on Positive Bund Yield Correlation As European Political Risk Wanes

Another argument for the recent rise in EUR is that downside protection is being pulled off ahead of the French Election. Effectively, this means that short trades are coming off that were being used to protect downside on the off-chance of a Marine Le Pen victory on Sunday.

Lastly, we likely have not heard the last of the commodity story, which was most influential on Friday morning. In the Asian trading hours, there appeared a capitulation move as Crude Oil broken lower to $43.73, which took USD/CAD close to 1.38. Into the close on Friday, Crude Oil is rebounding though still ~20% lower from yearly high. However, the real test of whether or not we see a ‘dead count bounce' on the chart or a true resumption of the Q4 move higher will be whether or not the price can move back above $50 later this month. An inability to break above $50 could mean we’ll be lower for longer, which could bring credit stress as evidenced by widening credit spreads, which we’ll watch and keep you updated on in the Closing Bell webinars.

Would you like to see what our Analysts Forecast for JPY longer-term?Find out here!

As evidenced by the impressively cheap downside protection on out-of-the-money EUR puts and recently accurate pollsters, traders likely need not fear a ‘Brexit’ like outcome for the final round of the French presidential election. Sunday’s Election looks to be a near-lock for Emmanuel Macron who holds a comfortable lead. Currently, the market is assigning a less than 10% chance for a surprise Le Pen victory.

Instead, Thursday will provide the week’s main event when the BoE meets. Though they are expected to keep rates unchanged, the fireworks will likely come from the updated economic forecasts focusing on growth and inflation, which could help to boost Sterling above $1.3000 if they lean hawkish on the British economy. 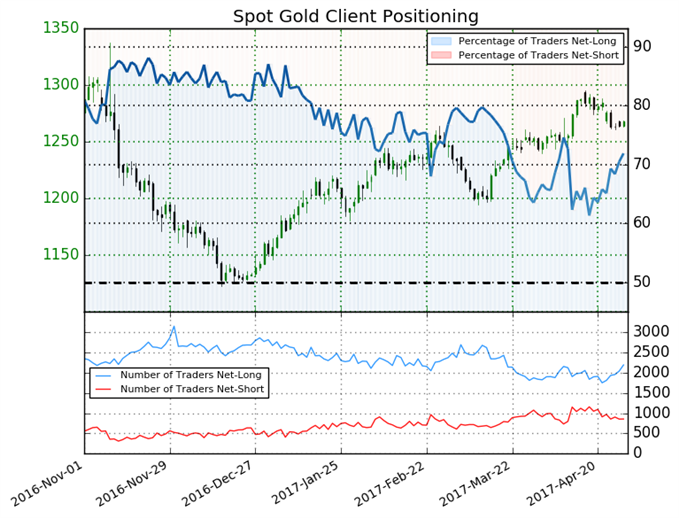 We typically take a contrarian view to crowd sentiment, and the fact traders are net-long suggests Spot Gold prices may continue to fall. Positioning is less net-long than yesterday but more net-long from last week. The combination of current sentiment and recent changes gives us a further mixed Spot Gold trading bias.(Emphasis Mine)