The New Zealand Dollar has been able to claw back some of its August losses – it was the worst performing major currency last month – as risk appetite has been buoyed in early-September. But now that the Q2’19 New Zealand GDP report is coming into focus, the New Zealand Dollar may come back under pressure amid renewed rate cut speculation.

Cooling tensions around the US-China trade have reduced the immediate need for an ‘insurance cut’ to cushion the New Zealand economy, if only slightly. Yet a Bloomberg News forecast still shows the New Zealand economy is due to slowdown from 2.5% annualized growth in Q1’19 to a 2.1% pace in Q2’19. Even so, expectations around the timing of the next RBNZ interest rate cut have been pushed back, per overnight index swaps: 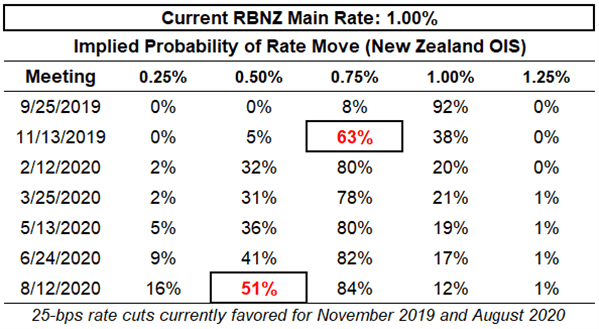 According to overnight index swaps, the odds of the RBNZ cutting rates in September have decreased since we last checked in, from 13% to 8%. But rate markets still believe that a policy shift is coming in November, as overnight index swaps now imply a 63% chance, as opposed to a 67% chance in the first week of September, of a 25-bps rate cut in November – the last RBNZ meeting of the year. If there is another 25-bps rate cut over the next year, rates markets have pushed back the timing from June 2020 (52% last week) to August 2020 (51%). 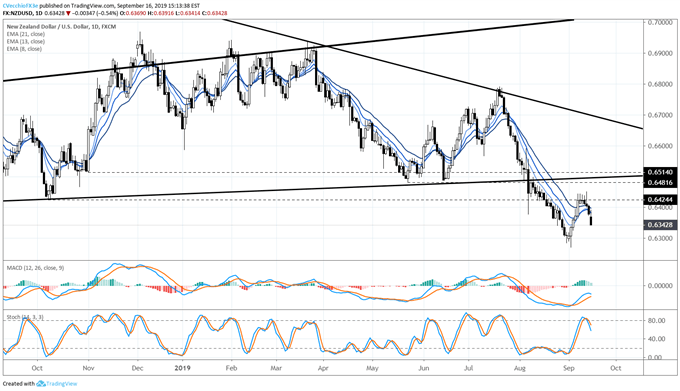 NZDUSD rates staged an impressive recovery at the start of September, but the bearish outside engulfing bar on Thursday, September 12 has seen follow through to the downside. The 2018 low at 0.6424 served as resistance during the early-September rebound, suggesting that downside pressure remains strong. Indeed, the break down through the ascending trendline from the 2015 and 2018 yearly lows suggests longer-term downside potential.

Momentum is turning negative again, with price below the daily 8-, 13-, and 21-EMA envelope (albeit not in sequential order). Slow Stochastics are declining from overbought territory, while daily MACD has halted its run higher in bearish territory. A return to the 2019 low at 0.6269, the bullish outside engulfing bar set on Tuesday, September 3, isn’t out of the question. 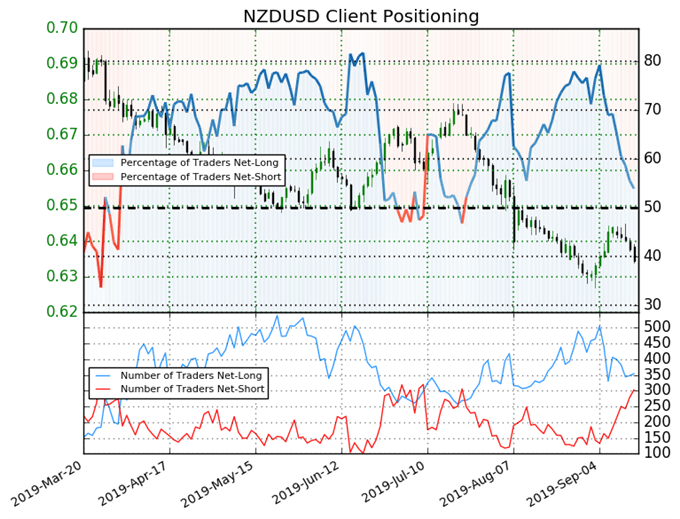