- With Crude Oil prices rising by 18.5% in January, there was likely a positive impact on Canadian growth.

- Accordingly, Bloomberg News is looking for the yearly growth rate to pick back up to 1.5% in January from 1.1% in December.

The first batch of growth data for Canadian growth is due this week, and it should come as a relief to Bank of Canada policymakers. After all, December GDP came in at a mere 1.1% y/y and Q4’18 GDP came in at 0.4% annualized, largely due to the sharp decline in energy prices last quarter (oil directly impacts nearly 11% of the Canadian economy). With Crude Oil prices rising by 18.5% in January, there was likely a positive impact on Canadian growth.

Looking at data trends during January, the Citi Economic Surprise Index for Canada gained from 11.1 to 43.7. Accordingly, Bloomberg News is looking for the yearly growth rate to pick back up to 1.5% in January from 1.1% in December.

Even as Canadian economic data has continued its trend of improvement from January into March (the Surprise Index is now at 61), concerns over global growth have clearly seeped into expectations over what the BOC will do next. Odds of a 25-bps rate cut by September increased from 21% to just above 28% over the course of the past week, per overnight index swaps. 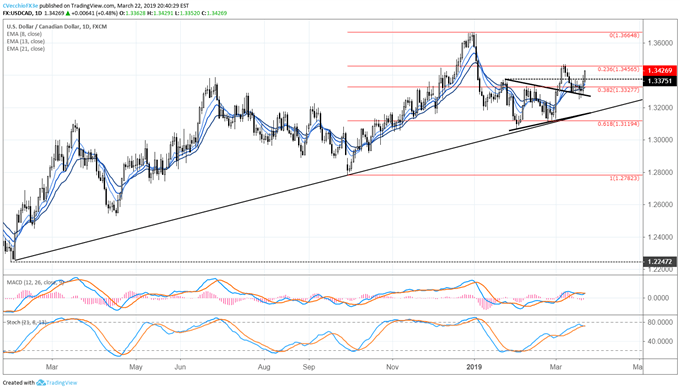 The uptick in concerns over global growth conditions has spilled over into the commodity currencies, leading to a recent stretch of weakness in the Canadian Dollar. One needs to look no further than the 20-day correlation with USDCAD and Crude Oil: after holding negative from August 15 to March 13, the correlation flipped positive. In other words, since March 13, no longer have rising energy prices been supportive of the Canadian Dollar.

The recent return back to former symmetrical triangle resistance proved fruitful, insofar as the market established that former resistance had become support; several dojis at the start of the week at the newly-minted support helped establish the base for the turn. Now that price is established above the daily 8-, 13-, and 21-EMA envelope and that both daily MACD and Slow Stochastics are trending higher in bullish territory, there’s little else to say other than the path of least resistance is presently to the topside. 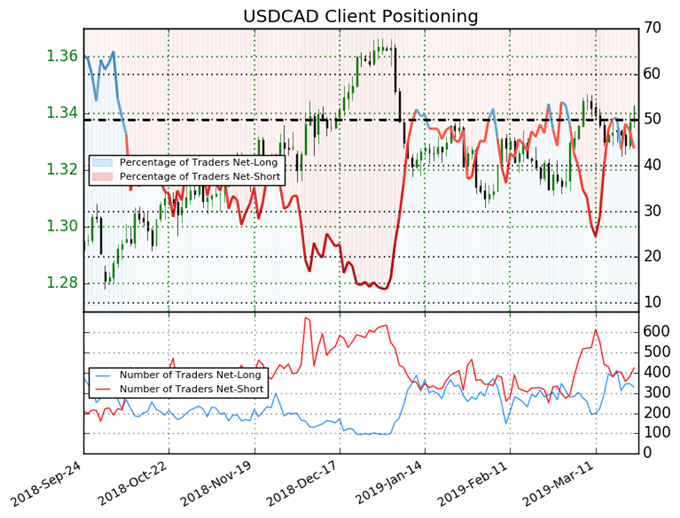