- The US Dollar slipped after the February NFP report, drawing into question how intense inflation pressures actually are; the February CPI report will shine light onto this topic on Tuesday.

- Now that the Bank of Japan has signaled a potential timeline to end its extraordinary easing measures, will the Swiss National Bank take the mantle of the world’s most dovish central bank?

According to a Bloomberg News survey, US consumer prices continued to climb in February, albeit at a slower pace than previous months. The headline is due in at +0.1% from +0.5% (m/m) and +2.2% from +2.1% (y/y). The core readings should be similar, at +0.2% from +0.3% (m/m), and at +1.8% unch (y/y). These figures aggregately have started to steady near the Fed’s medium-term target, adding evidence to an already-convinced market that the Fed will hike rates in March (100% implied probability per overnight index swaps). Considering the sensitivity the greenback has had to wage growth figures – implicitly, price pressures – the US CPI report on Wednesday could be the most important data release of the week for the US Dollar. Expect the US Dollar to follow US Treasury yields around the data.

Bank of Canada Governor Stephen Poloz’s speech is in focus given all the drama surrounding the Canadian Dollar. At their meeting in the first full week of March, the BOC made clear its hesitation to raise rates again in the first half of 2018 thanks to the ongoing uncertainty surrounding the NAFTA renegotiations. That said, Canadian data has hit a soft patch in recent weeks, with the Citi Economic Surprise Index down to -36.4. So while the uncertainty around NAFTA may be a convenient cover for the BOC to ease off of its hawkish bias (May rate hike odds have fallen from near 80% at the start of February to 55% on March 9), other factors may now be coming into play. 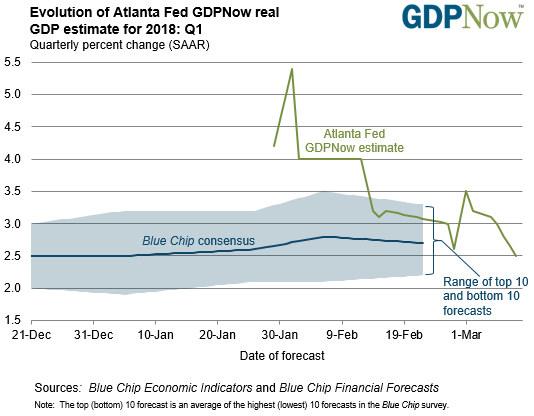 Based on the data received thus far about Q1’18, the Atlanta Fed GDPNow forecast is looking for growth near +4%. The next update to the Q1’18 forecast will be released after Wednesday’s US economic data.

New Zealand growth data comes into focus this week, marking one of the few data releases from New Zealand that truly draw interest from beyond local market participants (the others being the quarterly CPI report and the Reserve Bank of New Zealand rate decisions). Given that the Citi Economic Surprise Index for New Zealand closed out Q4’17 at +29.1, it stands to reason that the Q4 growth figures will come in above the prior rate seen in Q3. The consensus forecast compiled by Bloomberg News sees growth due in at +3.1%, up from +2.7% previously. In an environment where risk currencies have recovered a bit of ground in line with global equity markets rallying, a strong growth reading should provide further relief to the recently beleaguered New Zealand Dollar.

In any other week, the Swiss National Bank rate decision would go unnoticed thanks to a saturated economic docket. But as time moves through the ides of March, the global economic calendar is surprisingly sparse, dragging forward the SNB decision into the pantheon of top events over the coming days. It stands to reason that the SNB is now the most dovish central bank in the developed world, now that the Bank of Japan has signaled a potential end to its extraordinary easing measures around fiscal year 2019 (April next year).

Accordingly, while our expectations for this rate decision are limited – indeed, the Bloomberg News consensus forecast doesn’t foresee any change in their key rates – we’ll be keenly looking for any subtle shift in stance now that the European Central Bank has dropped their pledge to increase QE in the future (the SNB has mirrored the ECB since the Global Financial Crisis).

Read more: The Impact of Tariffs and Trade Wars on the US Economy and the Dollar