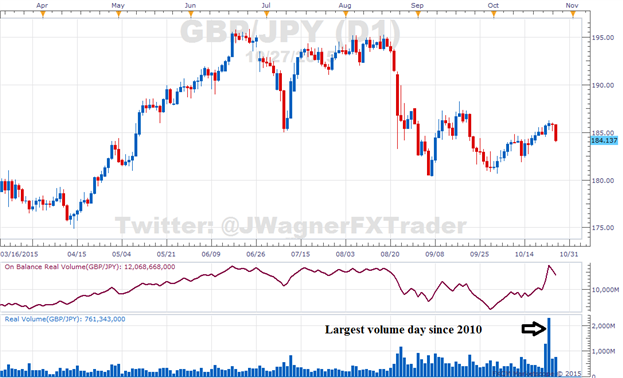 -GBP/JPY trades 2.3 yards on Friday, largest in over 5 years

On Friday October 23, 2015, GBP/JPY traded its largest volume in over 5 years. Friday ended up as a daily close higher, but the high price of the day may kick off an aggressive Elliott Wave 3 lower.

For those not familiar with Elliott Wave Theory, it is a technical study discovered back in the 1930’s where 5 waves move in the direction of the trend followed by 3 waves against the trend. Of the 8 wave sequence (5+3), the third wave of the 5 wave move tends to be the longest and strongest.

Friday’s high volume turnover may have put the finishing touches of the second wave which means we could be in the early stages of a third wave.

In this article, we will look at the volume, On Balance Volume, Elliott Wave count, and sentiment to set up the GBP/JPY analysis PRIOR to the Bank of Japan’s news announcement on monetary policy later in the week.

Volume and On Balance Volume (OBV)

OBV allows us to check below the hood for non-obvious trends. When I first pulled open the OBV on GBPJPY, I was surprised to see it printing at levels matching the June-August 2015 levels. However, the spike higher is obviously a result of Friday’s highest volume turnover in over 5 years. Since the large volume day printed as a positive daily candle, the OBV reading sky rocketed.

However, seeing this large amount of volume turning on the day price meets the 186.15-22 reversal zone, could provide additional weight to a trend change lower. If volume continues to pick up as price drops, that will help signal the potential for a lasting move lower.

Taking a step back and analyzing the Elliott Wave picture, September 17, 2015 was a meaningful high. The move to the downside from September 17 to September 29 has taken place in 5 waves. This move lower was partially retraced higher in 3 waves that appears to have terminated on Friday, October 23.

The market carving 5 waves lower (labeled i, ii, iii, iv, v) is critically important to the outlook. This 5 wave move is important because they don’t occur in isolation at the beginning of a trend. Since we have a subsequent partial retracement in 3 waves (labeled w, x, y) the higher probability move now is at least one more 5 wave move lower of similar size of which we saw from Sept 17-29. In this case, nearly 800 pips from the October 23 high is the generalized projection. 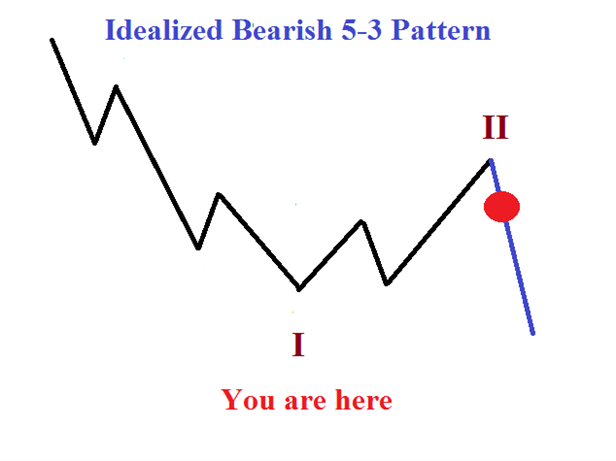 That would place a near term target of 178 and lower target levels exist in the 173-174 price zone. We can dial in those levels if price does sell off. If prices continue to sell off, the next support level is near 183 (grey trend line). A break of the trend line could offer a chance to enter short. A bounce up to near 184.75 could offer a point of entry as well.

We’ve been medium term bearish the GBPUSD for a couple months now and it appears the broad based Sterling bears are awakening from their slumber.

There is an alternative view we are tracking as well. Remember, when trading with Elliott Wave Theory we are never certain of the wave picture until the waves are finished. Therefore, we must bring a probabilistic approach and realize there are many wave counts in play and that we let the market exclude certain counts because they break one or more of Elliott’s rules.

Since the September 29, 2015 low, prices have been overlapping higher in complex fashion as a correction. Though the preferred wave count is that a resumption of the trend continues lower to retest and break the September low, there is an alternative count that needs to be considered.

This wave picture is a bit trickier because so long as prices are above 181.82, this picture still is possible and ultimately suggests a retest of the 188 high. In other words, wave (x) could sell off towards 182 and keep the door open for an eventual visit to 187-188.

In these scenarios, it is important to look at the internal structure of the waves and seek out patterns that clarify which count is preferred. So far, the sell off from the October 23 high appears impulsive and indicates a high likelihood of more damage being done to the downside.

Again, this alternate suggests we form a partial retracement lower before one final move higher to retest 187-188.

The sentiment for the GBP/JPY has been holding steady near -1.3 in light of the strong sell off we have seen today. Short traders and long traders have increased in frequency so interest on trading the pair is on the rise.

Traders have essentially been net short GBP/JPY since the beginning of October, when the pair began its counter trend bounce higher.

SSI is a contrarian type of indicator so when traders become more bearish, it is seen to be a bullish signal on market prices like what we saw in early October. This is because SSI reflects trader’s opinions in trades they have already initiated. Therefore, watch for an increase in bullish traders as that could add more fuel to the bearish fire since they become a future pool of sellers.

The wave picture, SSI, and volume are suggesting we may have started wave (iii) lower. We are anticipating this to be a multi-hundred pip sell off that may drive the GBPJPY exchange rate down towards 178.